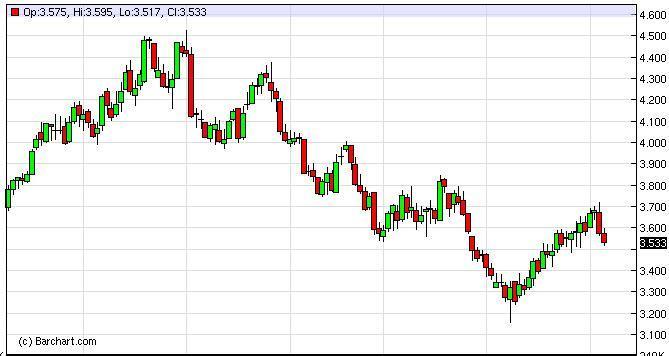 The natural gas markets skyrocketed during the session on Monday as traders stepped in to trade this market. Chesapeake Energy announced that it was going to stop drilling for dry natural gas as the prices are far too low to make the business profitable. With that in mind, roughly 9% of the gas drilled in the United States will suddenly stop production.

This could be the start of something bigger, but will take more companies doing the same at this point. While the move was massive, it still is far below the trend lines that we can put on the chart. And while this is bullish for natural gas in general, it won’t be enough to make up the difference as the winter is over half completed, and the most profitable season for natural gas has already been an unmitigated disaster this year.

The chart shows several different levels that will act as resistance, and although the move was on massive volume, the trend will be very difficult to change for good. The move could be violent and explosive, but buying still is a bit risky for us at this point. For starters, you would have to know what the “fair value” of 91% of the gas in the United States would place the market at. Also, there are plenty of areas around the world that are finding gas reserves, and the Gulf of Mexico is about to start churning out quantities as well. The market is still awash in gas, and this won’t change even with the move by Chesapeake on Monday.

Looking at the levels we are watching, $3 seems to be the most significant at this point in time. The area saw decent support and there is no reason to think that it won’t act as decent resistance. The other areas we are looking at include $2.75, $3.50 and of course $4. We are presently waiting for a weak candle in one of those areas to sell. We are not willing to buy, even though the bounce could continue for the short term.