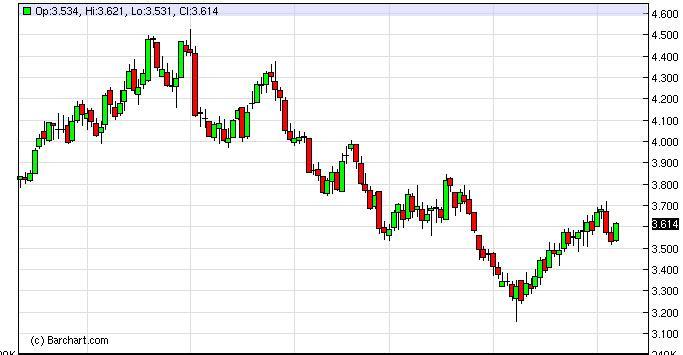 Natural gas markets fell on Monday as the market continues to try to price in extreme amounts of oversupply in this commodity. The winter continues to be mild in the northeastern United States, and warmer weather is on its way. Adding to this is the massive amounts of natural gas that has been found over the last twelve months, and you have a bit of a perfect storm when it comes to the falling market.

The markets did get a bit of a positive signal from a couple of gas drillers saying they are going to stop for the time being until prices can rise, but the mathematics are going to work against the bulls over time. With the winter well over half done, the market will struggle to deploy all of the excess overhang in inventory. With this in mind, the down trend should continue.

The $2.50 level looks to be supportive at this point, and this makes sense as it is a “round number” of sorts. The $2.85 has seen sellers come back into the market, and it has yet to see a serious challenge to the $3 mark. This fairly tight range we have seen over the last couple of sessions sets up a fairly straightforward trade for us.

On the break of the top of this range, one could try to aim for $3, but it is at that range that we believe the real battle will be. Because of this, buying a breakout to the upside, while technically correct, might be a bit risky at this point. However, a break of the $2.50 and daily close down there would signal that the bears are back in control – and we would be very happy to sell at that point in time as the trend has been so strong over the last year or so.

While we have two separate signals that could be triggered, quite frankly we prefer to sell as the trend will take control again sooner or later, and it has been a great one-way trade for some time now.