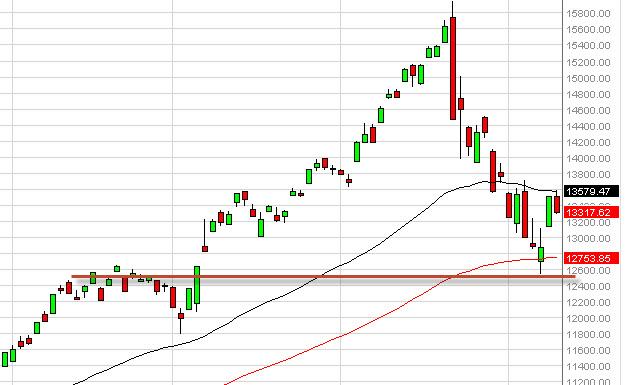 With the Nikkei forming a hammer on Monday, it is obvious to us now that the breakout be settling in. After all, we did fall back to retest the ¥13,600 level, an area that we suggested was the resistance previously. Now that we have tested it, and it is proven itself to be worthy of support, we now look at the hammer that was formed on Monday as a very significant buy signal.

This of course will be helped by the fact that the indices in Europe and North America were relatively positive for the session, and as a result momentum should continue on the upside for the stock markets around the world. Not necessarily looking for a blowout move, but it definitely looks like the breakout did of course signifies that the retracement had been completed.

When you look at the pullback from a longer-term perspective, it is roughly at the 38.2% Fibonacci retracement level that the market found buyers again. This is true in both the Nikkei and the USD/JPY markets, as they do tend to move lockstep at times. That being said, we are bullish of the Nikkei, and fully expect to see it reach the lofty heights that we had seen six weeks ago.

We don’t necessarily expect a straight march higher though, but rather a continual positivity to the Japanese markets that could be quite lucrative if you have the ability to go along at this point. Obviously, you can play individual stocks, and the exporters should do fairly well as long as the value of the Yen continues to depreciate. But with the Yen currently struggling around the 100 level against the US dollar, it is possible that the currency markets will stagnate a bit, meaning that you may have a hard time picking individual stocks that will do well, but may find yourself doing better with the futures out of Chicago or Singapore, or possibly an ETF that follows the Nikkei 225 in general. This is one of those situations where we feel it is an “a rising tide lifts all boats” type of market.