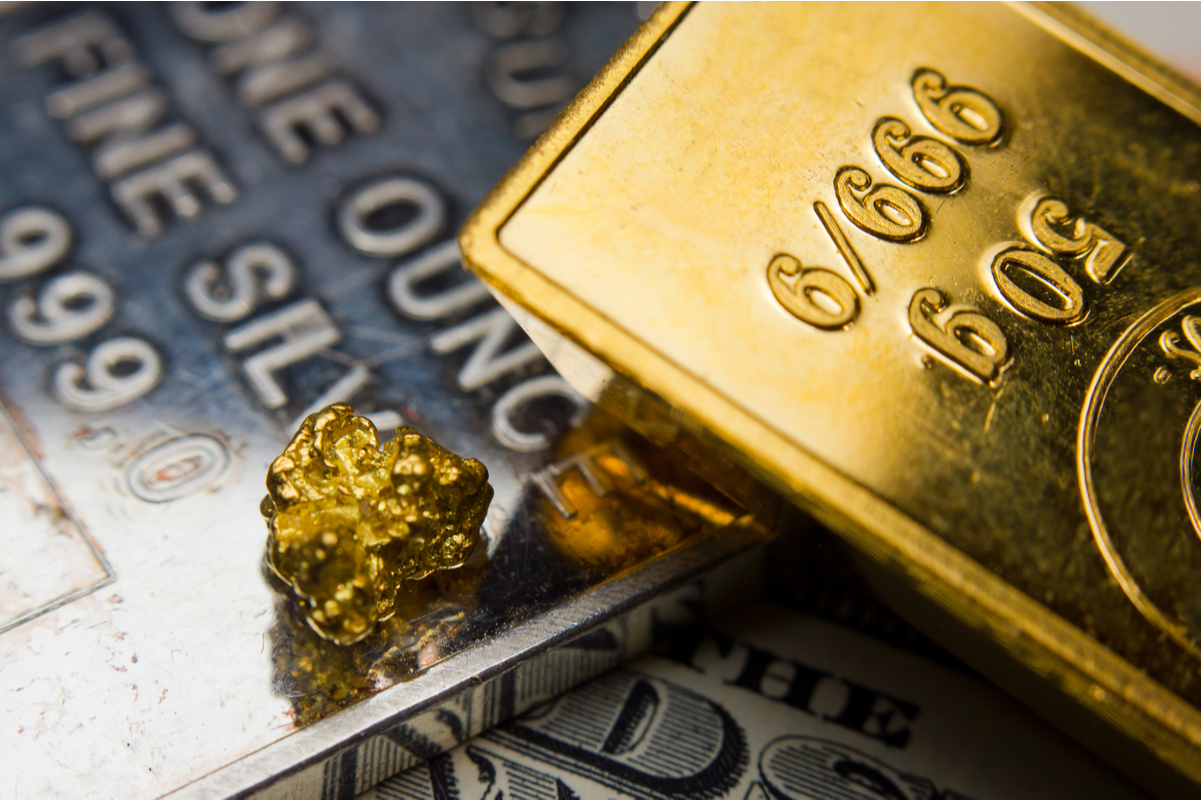 Gold moved visibly lower yesterday, silver closed at the second-lowest level in over 2 years, and miners (both GDX and GDXJ) formed their lowest daily close in over 2 years! If someone has chosen to take short positions, profits have increased.

Let’s take a closer look at what happened. 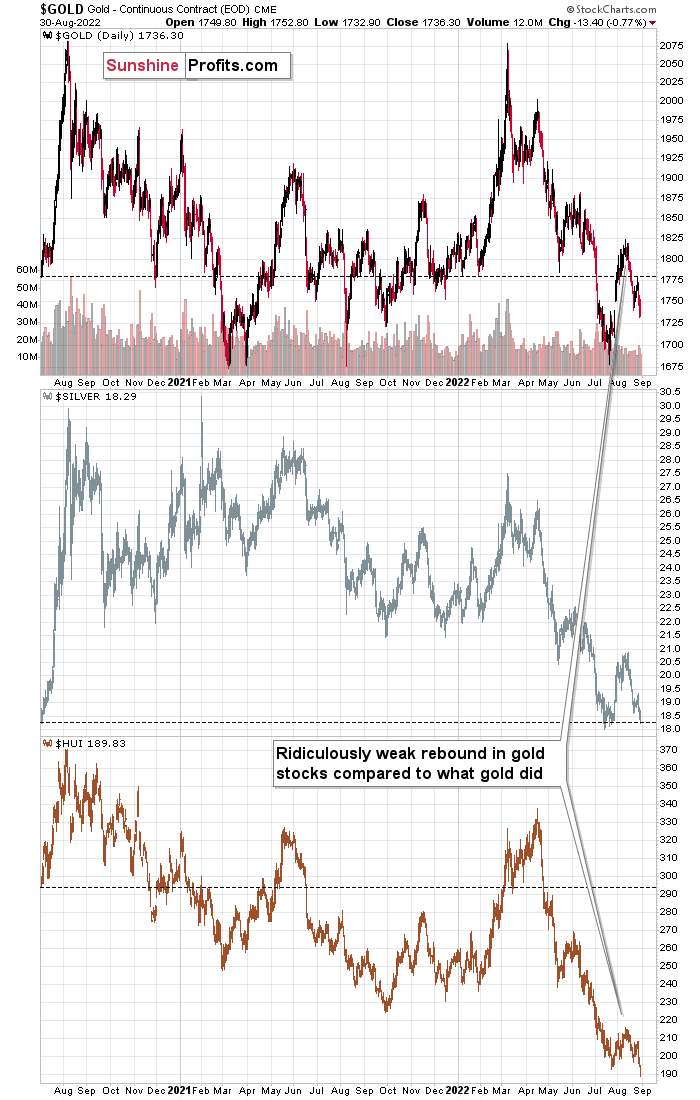 The freefall in gold stocks continues. Remember when I wrote that miners were about to slide profoundly, when they were trading over 320 earlier this year? Very few of my colleagues agreed, and some laughed. I guess the laughter is silent by now.

The weakness that we saw in previous weeks – and during yesterday’s session – is truly profound, and what I wrote about it yesterday remains even more up-to-date, as we have now seen a breakdown to fresh lows. Quoting my yesterday’s analysis:

Gold and silver are currently more or less where they were trading about two years ago (before the final part of the mid-2020 rally).

What about gold stocks? The HUI Index would have to rally by almost 50% in order to get back to those analogous price levels!

Gold stocks usually lead gold higher and lower (there are some short-term exceptions, but they are not really applicable right now), and there’s no doubt that miners currently lead gold lower.

Please consider the size of the recent corrective upswing in gold, then in silver, and next, please look at how “much” gold stocks rallied.

Not only that – gold stocks already gave away almost the entire rally, even though gold is only about halfway down.

If you think that this is extremely bearish, then… Of course, you’re right. However, the situation is actually even more extreme than that.

You see, that’s the same thing we saw on the precious metals market in 2013, right before the biggest part of the slide! 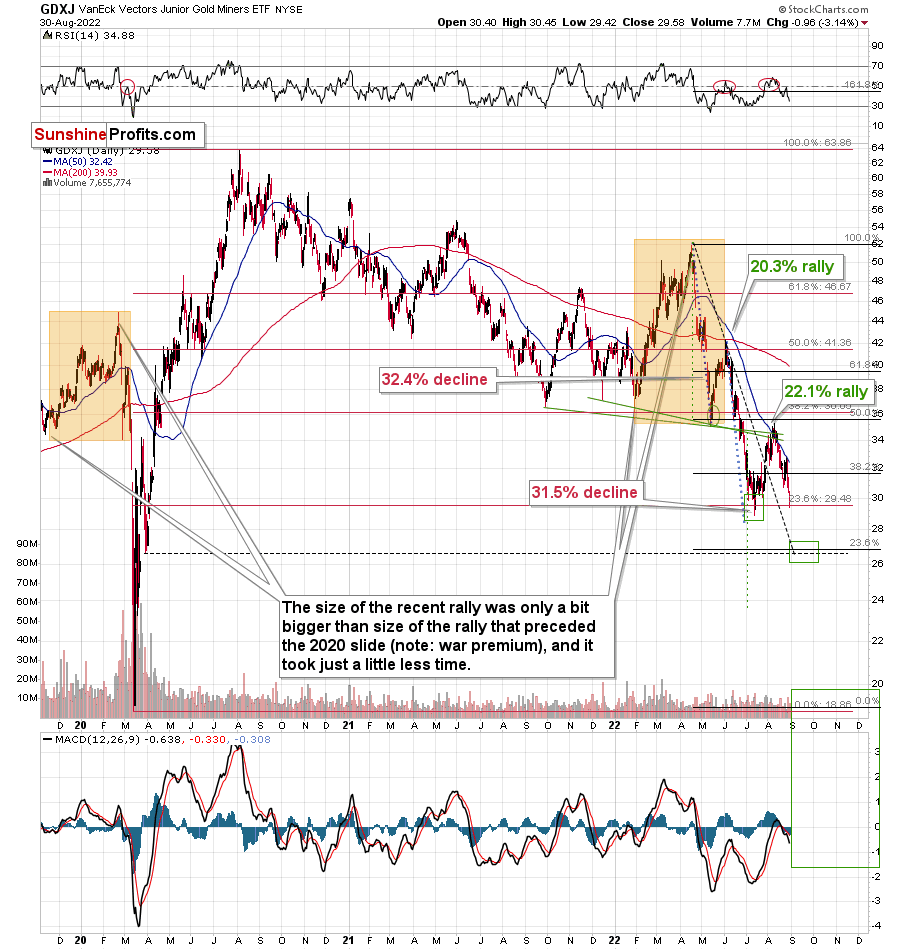 Now, as far as the GDXJ is concerned, it really seems that it’s on its way to its 2020 lows. The question is whether it will get there in the 2020 style or whether the decline will be more measured. If so, then where the corrections might be, and whether it’s a good idea to try to trade them.

Back in 2020, we had a global panic based on something that the modern markets haven’t experienced before (the pandemic, lockdowns). Now we have “relatively regular carnage.” The rates are going up, as well as the USD, and the stock market is going down.

However, it’s not a massive-event driven price move, and thus it can – and is likely to – take place in a rather regular manner.

So, while it’s still likely to be huge, like what we saw in 2008 and 2013, it’s also likely to be more measured and thus technical.

What Happened During the Crisis?

Back in 2008, the price moves were bankruptcy-news driven, while in 2013 the decline took the regular form. Despite the initial reason for gold to move up (Russian invasion in Ukraine), it failed to hold on to its gains, and instead it started to decline in a very visible way. Silver and miners are declining even more and faster.

The pressures from the USD Index and real interest rates are now greater than they were back in 2013, so the current decline has “bigger legs”. It lacks the dramatic circumstances of 2008, though.

What does it all mean? It indicates that the current big move lower is likely to be at least as significant as what we saw in 2013, but at the same time that it might be easier to trade than with the huge price swings that we saw in 2008.

Where does this discussion get us? It gets us to the indication that it’s still possible that we get a reliable rebound from the $27-28 area in the GDXJ, while gold rebounds one last time from the previous lows.

I previously commented that the above move is too uncertain to bet on it, and this remains to be the case However, I would like to point out that it’s still possible that I will write about adjusting the trade at those levels, after all.

This will depend heavily on the way in which the precious metals market falls in the following days. The more sudden and sharper the drop, and the stronger miners are relative to gold (so far this is completely absent), the bigger the odds that we’ll see a corrective upswing.