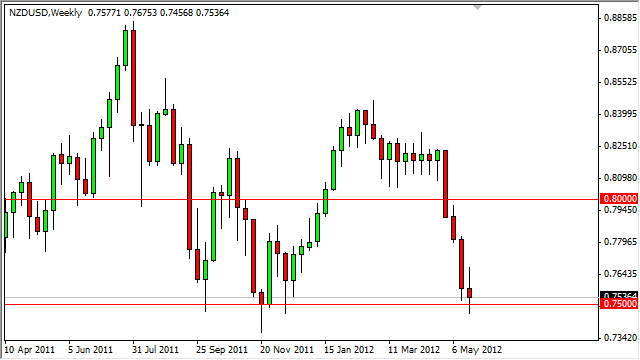 The NZD/USD pair has been sold off in a harsh move over the last month or so. It is because of this that we are somewhat impressed by the fact that the bears managed to pound out another red candle for the week, even as we approached the 0.75 support level.

The level is a major one, and a bounce is very possible at this point. However, if it gives way and the market falls – the rout could be on. The risk appetite of the markets in general will continue to weigh upon the Kiwi dollar as it is one of the favored commodity currencies out there. The candle for the week is a doji, and we can see it as a signal in and of itself. A break below the lows should see this pair continue the bearish momentum, and will more than likely have a lot to do with negative headlines out of Europe.

The market does look like one that could produce a bounce, but the move lately should leave no doubt as to the momentum and the easiest course for prices. A rally form this level would more than likely offer a weak candle sooner or later, and we would sell that candle. The 0.80 level looks very resistive as well, and we think that this pair will simply have to close above that level on the weekly chart in order to think that something has changed in this pair that makes us want to buy the New Zealand dollar.

The commodity markets will have to be watched as well, since the New Zealand dollar is highly sensitive to the overall attitude of the commodity markets. The “risk on, risk off” attitude and behavior of the markets lately has made this a simply trade as it simply reflects whether or not the trading world is fearful or not. We like selling rallies under the 0.80 handle, and also selling a break below the bottom of the weekly candle as it should be a result of momentum swinging back to the downside again.