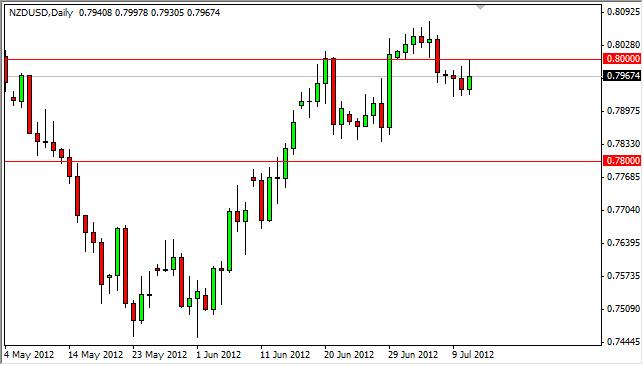 The NZD/USD market rose during the session on Wednesday, to slam into the 0.80 resistance level again. However, it was repelled at that point in time and it does look like the 0.80 level is going to continue to offer pressure to the downside. Some of this would have been the deflating minutes out of the Fed during the session as there was no mention of quantitative easing. This would have pushed commodity markets higher, which of course would have brought in a bid for the Kiwi dollar.

We see the 0.8050 level as crucial for the bullish argument out there. If we can close above that level, we would be interested in buying. Until that happens, we simply see no reason to get involved at this point as we are just under a fairly thick resistance zone. As for selling, we think that’s probably the more likely scenario, and think that a break below the Monday hammer would be substantial enough to start selling albeit in small short-term positions.

If the market manages a break below the 0.78 level, we are willing to sell little the more aggressively at that point in time as we would believe it would signal that the Kiwi is starting to fall apart. With the commodity markets out there suffering in general, save the grains as they are reflecting drought prices, the Kiwi should continue to weaken over time.

Once we manage to break down below the 0.78 level, there’s no reason to think that the market would head toward 0.75 or even below. It is in this area of that we would be extremely aggressive shorting the Kiwi as it would show that the risk appetite had a crumbled. In the meantime, we think that the pair will more than likely be a bit consolidative between here and 80.50 as the market continues to tighten up. Headlines will more than likely determine the fate of the Kiwi dollar, so this will be one of the more difficult currency pairs to trade. With this being the case, many of you may choose to step away from it, or at least wait until the larger more obvious areas are broken.