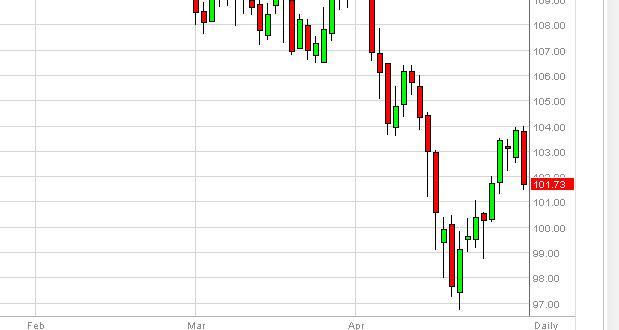 The CL contract rose again on Wednesday as the move from the previous session found follow through. The $97.50 level was taken again, and the $100 level is sitting just above. The market is currently in a down channel, but a break above this channel could actually be a bullish flag breaking out. If this is the case, we are looking at much, much higher prices in the Light Sweet Crude markets. The pole would measure this move as high as $132 roughly, and this would be a serious weight on economic output in not only the United States, but also around the world.

It is because of this that we actually believe more in the down trending channel presently, and are willing to sell weakness at this point. However, if we are wrong – there could be a nice buy and hold trade in this market. There are some catalysts out there to potentially case a spike in oil, but demand really isn’t one of them. If the commodity spikes, it is probably more indicative of the US dollar, and less so of oil itself.

Brent markets tried to fall on Wednesday, but bounced at the end of the session in order to form a hammer. The hammer sits just above the $105 level, and it looks like we are reentering the previous consolidation area up to the $112.50 level. A break of the Wednesday range should see this market trying to reach that $112.50 mark, and would have us on board for a short-term scalp. The breaking of the lows from Wednesday would have us bearish again as it would show a failure to rally and that the bulls simply do not have enough power to pick the market up at this point.

With the holiday season in full swing, it is easy to think that this pair may simply go sideways in this range for a while, and as a result this is how we are playing it: for small gains from wither the bottom or top of the range, simply scalping for a dollar or two at a time.