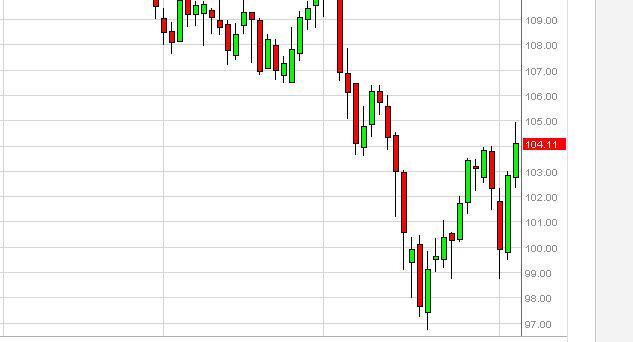 The CL contract managed to squeak out a gain on the light Thursday session. The markets are general quiet so close to Christmas at this point, but the bias has certainly shifted to the upside over the last couple of sessions. The potential for a downward channel is still there, as well as the potential for a bullish flag. Only time will tell which one ultimately proves to be correct, but none the less – there will be some kind of move coming soon.

Currently geopolitical risks are taking the forefront in this market, and as long as there is unrest in Iraq, uncertainty with the Iranians, and general turmoil in the Middle East, there will be a risk that we see higher oil prices. The markets are currently very sensitive to these issues, and the price can very easily reflect this on headlines coming out of various parts of the world. We are slightly bullish, but not enough to put on a position at this moment time due to the holidays.

Brent fell during the session as the volume receded for the Thursday trading day. The market is moving into a resistance area, and the area held true. Of course, only so much can be read into it as the market simply doesn’t have the volume necessary to remove the long-term selling that the area above has seen over the last several months. The Brent market is going to be heavily influenced by the problems in the Middle East, and elsewhere. However, there is a question about demand going forward. If the global economy is really going to slow down, one has to wonder how much longer the bulls can stand on “potential” issues in the Middle East. Sooner or later, somebody is going to have to increase consumption for a sustained time period in order to keep pushing prices higher.

Last week we saw a massive drawdown in inventories of crude out of the United States. However, this could be partly due to all of the shipping that goes on at Christmas time. The real test will be down the road as we exit the holiday season, and get into more normal conditions. In the mean time, we are slightly bearish of this market, but will remain flat until the volume picks back up.