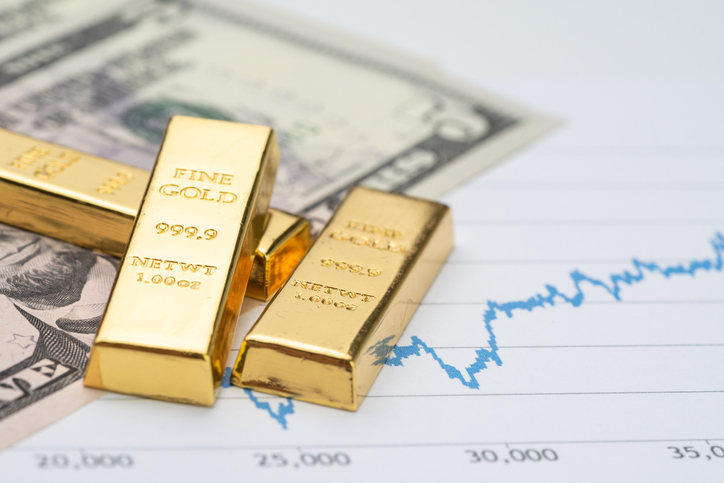 Gold futures are edging higher and in a position to change the trend to up on the daily chart in reaction to a plunge in the U.S. Dollar against a basket of currencies overnight. The drive to a one-week high on Thursday is being primarily driven by hopes of a new U.S. fiscal stimulus deal. Meanwhile, a pledge by the Federal Reserve to keep rates low until an economic recovery is secure lent further support.

The U.S. Dollar set fresh 2-1/2-year lows against major rivals on Thursday as progress toward reaching a new U.S. stimulus package and a Brexit deal boosted risk appetite at the expense of the safest assets.

According to CNBC, Congressional leaders closed in on a $900 billion coronavirus relief deal Wednesday as millions of struggling Americans wait for help.

The developing aid agreement would not include liability protections for businesses or aid to state and local government, CNBC confirmed. Disagreements over those two issues have blocked lawmakers from crafting a year-end rescue package.

“We made major headway toward hammering out a targeted pandemic relief package that would be able to pass both chambers with bipartisan majorities,” Senate Majority Leader Mitch McConnell, R-Ky., said on the Senate floor Wednesday after a night of talks among the top four congressional leaders.

Speaking after McConnell, Senate Minority Leader Chuck Schumer, D-N.Y., said “we are close to an agreement” but noted “it’s not a done deal yet.”

The Federal Reserve on Wednesday left its benchmark interest rates near zero and pledged to maintain its bond-buying programs until the economy returns to full employment. The news was dovish but not ultra-dovish as some had predicted.

Fed policymakers said they would continue to buy at least $120 billion of bonds each month “until substantial further progress has been made toward the Committee’s maximum employment and price stability goals,” the post-meeting statement said.

The strong hope for a new fiscal stimulus package from Congress is driving the market higher. The trend will change to up on a trade through $1879.80, but buyers will have to overtake $1894.60 in order to generate the momentum needed to fuel an acceleration to the upside.

Unfortunately, I think gains will be limited because of the size of the proposed stimulus package. It’s big enough to produce a rally, but I don’t think it’s enough to recover all of the loss from the November high at $1973.30.

However, we could see an even bigger stimulus move once President-elect Joe Biden takes office on January 20.