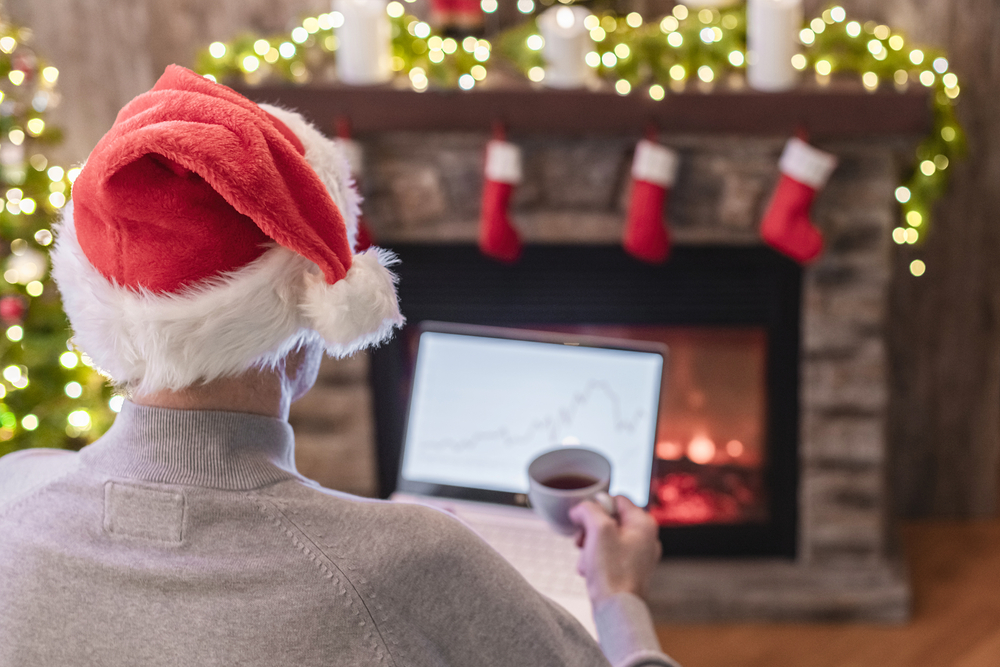 US stocks rose broadly Tuesday, and the S&P 500 pushed toward another record high as investors focused on a bullish assortment of reflation libations. Markets also cheered when they heard Janet Yellen’s voice in an official capacity again when the former well -respected Fed Chair accepted President-elect Biden’s offer to join his economic team in the official capacity as new US Treasury Secretary.

Markets are trading off their intersession highs but remain on stimulus watch. However, caution should be exercised after all; we have had this stimulus carrot dangled in front of us before.

Still, it was one of those healthy risk-on days that may have set the market’s wheels in motion for a December to remember. The better sentiment came amid robust global manufacturing PMIs for November, notably in China, and optimism that coronavirus vaccines could soon help usher in a faster global economic recovery with the Moderna candidate applying for FDA emergency approval. Still, the cheery on top is the possibility of stimulus before year-end, helping rocket-fueled the reflationary tone to markets.

The next leg of the rotation into the Reopen trade is underway as rates move higher, a December to remember kicks off, and stimulus hopes grow. Price action overnight is yet another confirmation that folks are willing to look yonder and beyond the bounds of lockdowns (forced or self-imposed) and instead are eager to focus on a vivid post-vaccine world.

Santa has come early for the markets, and even if it is a very unusual version of consumer Christmas- lite this year, “happy days are here again ” as the world is now hoping the festive mood music never ends. Still,

I would be surprised if the move today at the Index level turns into a straight line higher for the Value/Cyclical trade. Instead, it would expect more single-stock dispersion again as investors become more selective.

The cross-currents of positive vaccine news and an improving outlook vs. slowing data and weaker sentiment kept the VIX in a 21-25 range for three weeks even as the S&P 500 tested the upper end of its recent range and the Russell 2000 surged 20% in November. The VIX fell below 21 during the Thanksgiving holiday week, but the belly (approximate 3-6-month VIX futures) has remained stable at about 25 as growth/virus risks persist.

With various moving parts to manage and some justifiable fatigue setting in among OPEC+ policymakers attempting to find common ground to extend historically high production curtailments, OPEC/OPEC+ process is proving to be an exceptionally delicate affair. And even if we compromise to defuse a bitter dispute over the current quota cuts, it does not bode well for the OPEC compliance cooperative in 2021.

The timing could not have been worse for OPEC+ to drop the ball given the moon shoot reflationary unfolding in what could very we be the start of a December to remember. While cross-assets are reveling to the beat of vaccine and stimulus news, oil markets are still languishing in OPEC + meeting deferment sulk.

And rubbing salt in the OPEC+ fissures, oil sold off further as US inventories balloon. Analysts penciled their Thanksgiving oil demand guesses on the wrong side of the ledger. The American Petroleum Institute reported on Tuesday a build in crude oil inventories of 4.146 million barrels for the week ending November 27 against analysts’ expectations for a draw.

Oil prices were trading down on Tuesday afternoon before the API’s data release despite daily news of Covid-19 vaccine progress, after OPEC on Monday ended its meeting without a resolution. OPEC finds itself in a slippery situation again—and make no mistake, it is compulsory for the present a united front for whatever plan it hatches. The small slip in oil price on Tuesday is only a curtain warmer of what will happen to prices should the deal fail. Indeed, it is worth keeping an eye on oil markets while the wrangling over OPEC+ production cuts continues.

The Euro surged higher overnight on an assortment of reflation libations that rocket-fuelled the global growth upswing narrative, specifically early vaccine approvals, and US stimulus optimism. And Fed hopes came off the ropes after a weaker than expected ISM overnight.

Also, Brexit negotiations went into the ‘tunnel’? Times reporter Tom Newton-Dunn says they have, although there has not been any confirmation from other sources yet. For now, it should be treated with caution, particularly as this still does not mean the political hurdles will be overcome. What is clear is that the most decisive few days now lie ahead. On both sides, general assumptions are that a deal needs to be done by next week’s EU Summit on Dec. 11/12, so there is still room for a calamitous tumble, but a more unlikely than not.

The Pound also caught a bid with Gilts under renewed pressure after the headlines on Brexit negotiations. Along with discussions around some additional stimulus in the US, it looks like the potential pitfalls that could have tripped up markets into year-end are all suddenly looking less of a worry.

So, after the month-end noise, EURUSD sliced through 2020 highs like a hot knife through butter. The FX insider track has the same views as last week. Namely, the market is under-invested, and the risk is a bigger move higher.
The Australian Dollar

Today, the Australian dollar is in a bit of catch-up mode after RBA Governor Lowe reiterated that “Australia has turned the corner on the economy,” speaking to the economic committee.

The AUD had failed to keep pace with other parts of G10, failing to make much progress despite a risk-on mood in stock. I suspect the escalating Australia -China trade spat is creating a touch of buyer fatigue. Yesterday, EUR-USD failed to hold above 1.20, USD-CAD was unable to break below support at 1.1920, and AUD-USD could not sustain the shift above 0.74. All three currencies weakened against the USD as a result, but while the EUR and CAD have recovered the bulk of that reversal, the AUD had languished

Solid manufacturing PMIs in Asia for November fusing with stimulus and vaccine optimism drive broad-based FX gains in Asia. Central banks in the region are increasingly uncomfortable with FX strength, but their caution is not unusual early in a global economic cycle. Relatively attractive yields vs. G10 suggest investment flow into local bond and equity markets will continue.

However, the ringgit has fallen off the pace as local traders turn a cautious eye to the OPEC quota extension meeting proceedings, which are now presenting a crater on the road instead of a minor speed bump. During the OPEC conference, tension saw the Saudi Energy minister offered to resign as co-chair of the panel at one point. Yesterday it was reported that the scheduled meeting would be pushed back to December 3 to give ministers more time to reach an agreement overproduction.

Gold price pops back above USD1,800/oz as USD retreats, and while gold can go a bit higher, it still faces uphill challenges from vaccine optimism.

Gold after a series of nasty declines following enthusiasm over COVID-19 vaccines. Gold had been trading well below USD1,800/oz and came close to testing the psychological make or break for ETF concerns USD1,750/oz level. A weaker USD effectively threw a lifeline around bullion, helping it rally back from two weeks of declines.