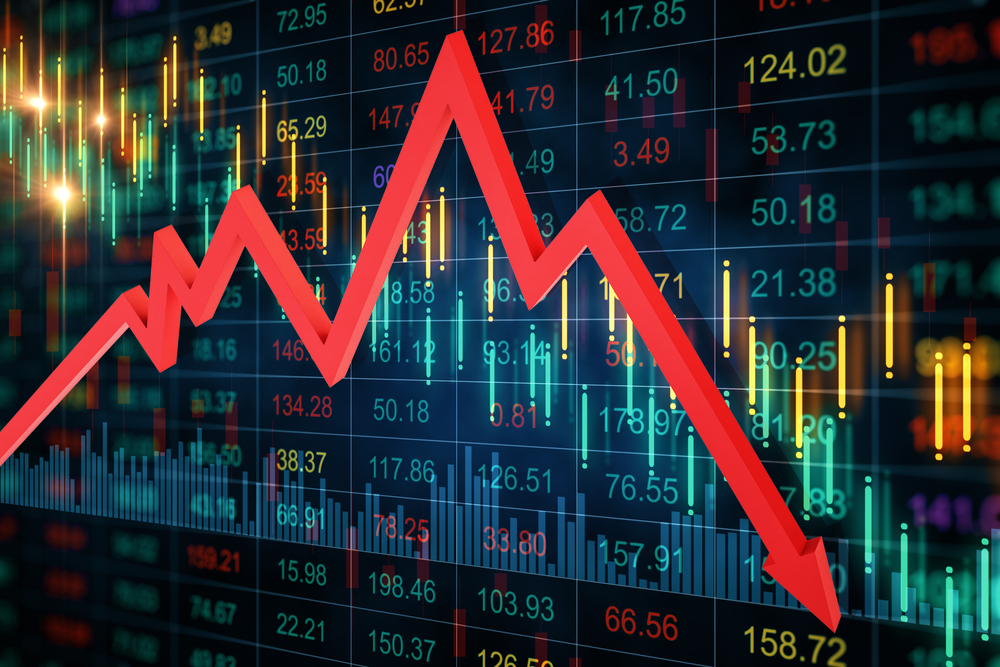 Since the topping formation manifested in January 2022, S&P 500 has dropped 14% off the peak with increasing volatility both to the upside and to the downside. This is mainly due to the unfolding of the Wyckoff distribution pattern (as explained in the video before the selloff happened in the past 2 weeks) and the stock market rotation where the smart money flows from the growth theme and the technology sector to the defensive sectors like consumer staple (XLP), utilities (XLU), health care (XLV) and the commodities including the energy sector (XLE). 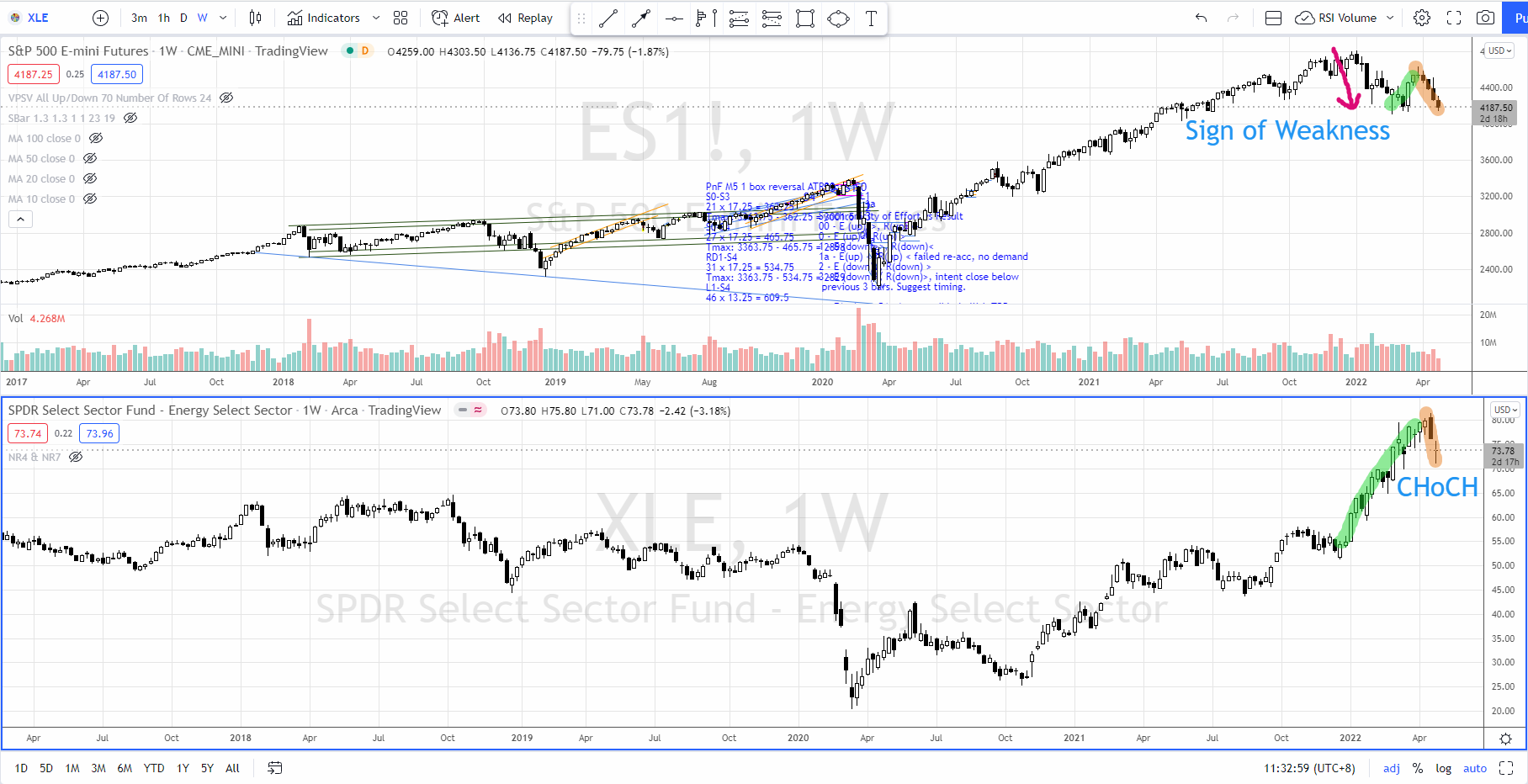 Since January 2022, S&P 500 experienced a selloff as a sign of weakness followed by a weak rally while the energy sector (XLE) rallied up to all time high (highlighted in green).

Since 21 April 2022 XLE had a biggest down wave (highlighted in orange), which is considered as a Wyckoff change of character to stop the uptrend into a consolidation or even a reversal. This is a significant event because this kind of the stock market rotation is similar to what happened during Wyckoff distribution in 2008 before the market crash. Refer to the chart below: 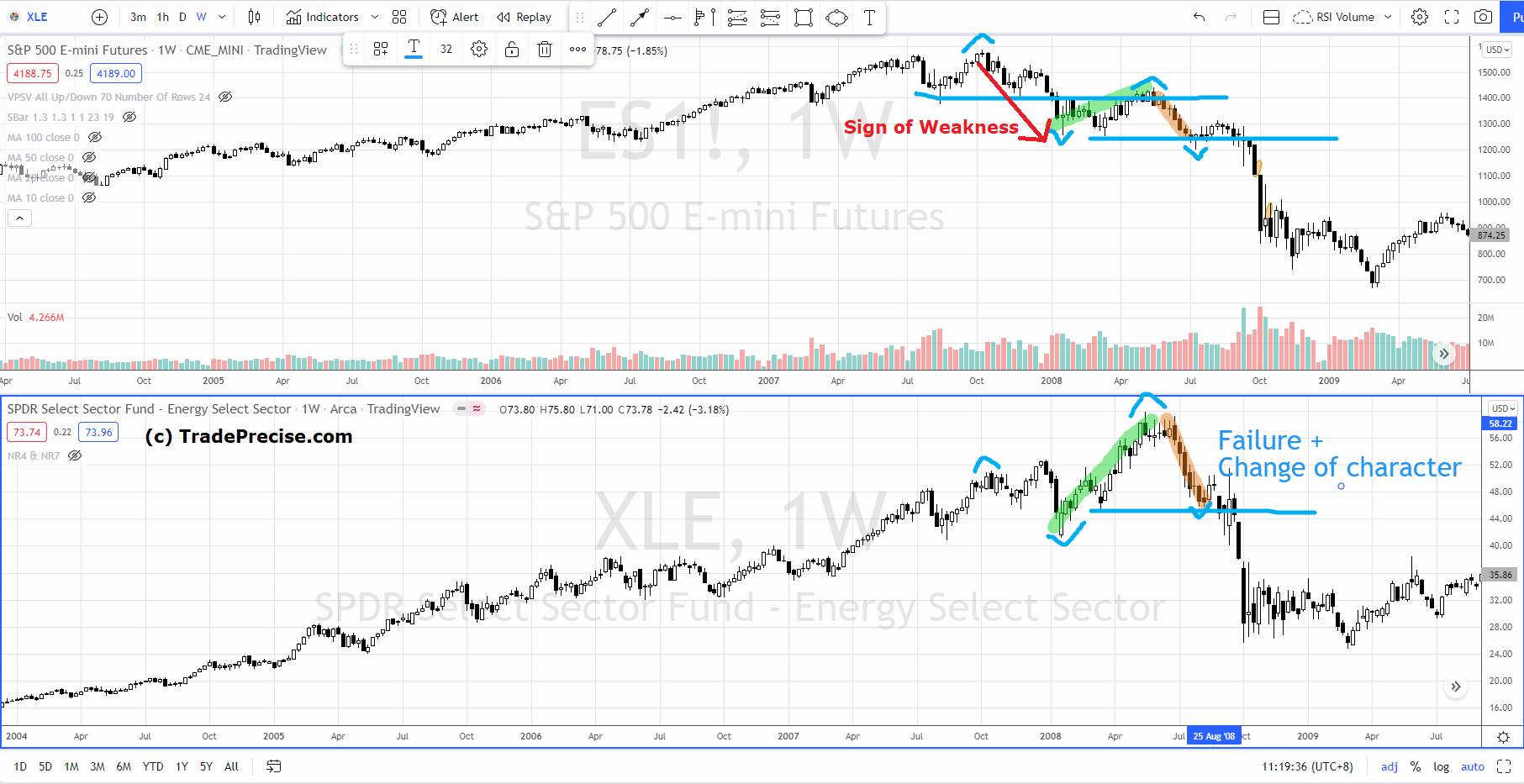 In late 2007 S&P 500 formed a topping formation followed by a break down as a sign of weakness. In January till May 2008, S&P 500 had a weak rally up barely tested the axis line where the previous-support-turned-resistance while the energy sector (XLE) created a new high (as highlighted in green).

The next selloff in XLE (highlighted in orange) signaled a breakout failure, which is also a Wyckoff change of character that led to a reversal. This is similar to what’s currently unfolding in XLE as shown in the first chart. The market rotation sequence during the Wyckoff distribution phase is almost the same in 2022 and 2008.

Let’s compare the price structure of S&P 500 in 2022 and 2008 to find out the similarity of the Wyckoff distribution pattern, as shown below. 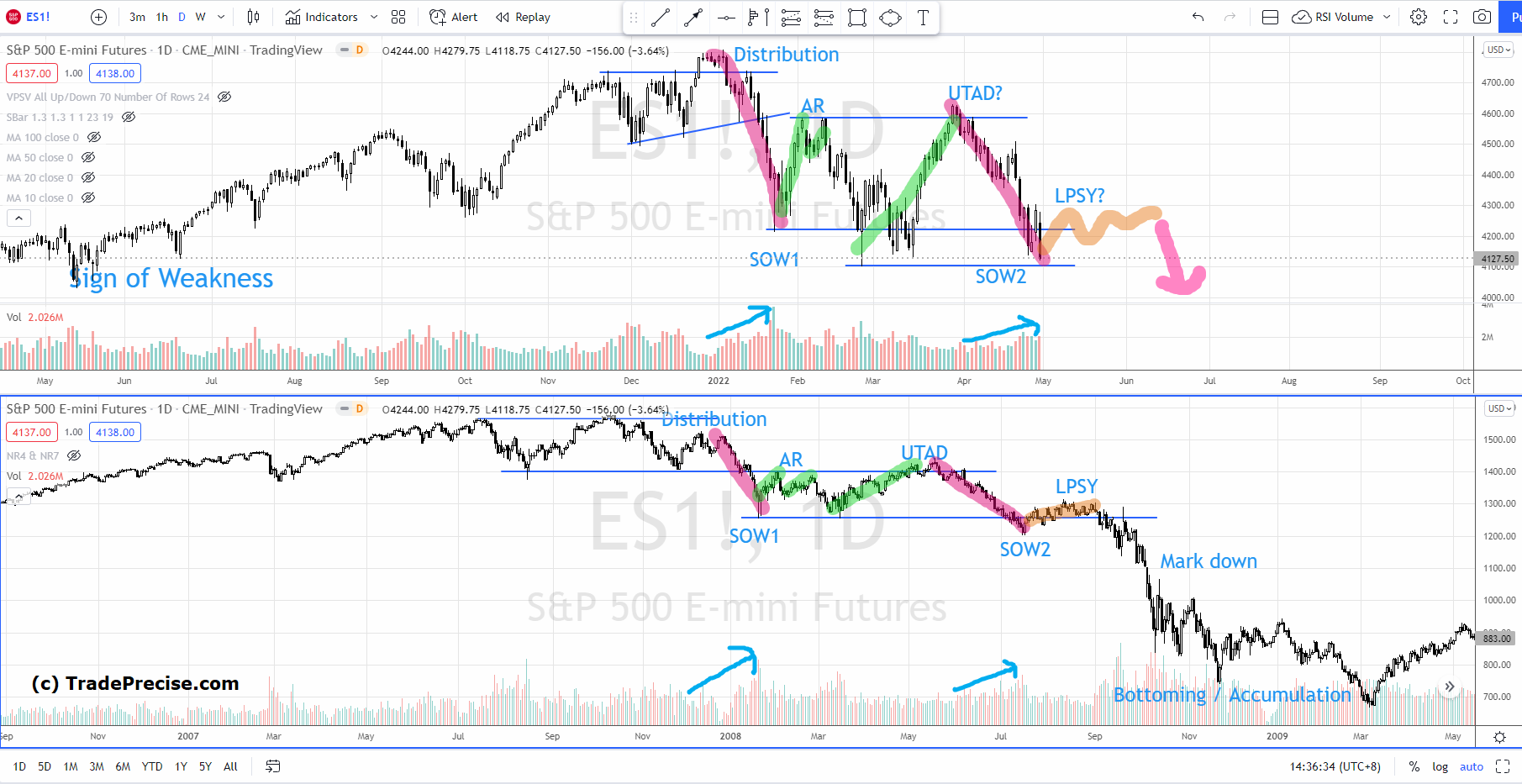 From the top pane, S&P 500 had a Wyckoff distribution formation formed by the end of 2021 followed by a break down (highlighted in red) in January 2022 as a sign of weakness (SOW1). The stock market breadth at that time also confirmed the bearish bias as I discussed in the video.

The subsequent price movements including the automatic rally (AR), potential upthrust after distribution (UTAD) and the sign of weakness (SOW2), which is still unfolding, are similar to 2008’s as shown in the bottom pane.

Now the S&P 500 is testing the last line of the support at 4100. Should 2008’s price structure be a decent analogue for reference, a last point of supply (LPSY) as a weak rally (highlighted in orange) can be expected before the market collapse.

Check out the 2 bearish scenarios that lead to a market crash with the price target and what you can expect for S&P 500 to violate this crash (at least for the time being) in the video below.

Although there was presence of demand shown up last week in S&P 500, the bull needs to prove itskself to rally away from the vulnerable area and to at least commit above 4300 to avoid the bearish scenario to crash below 4100. Visit TradePrecise.com to get more stock market insights in email for free.