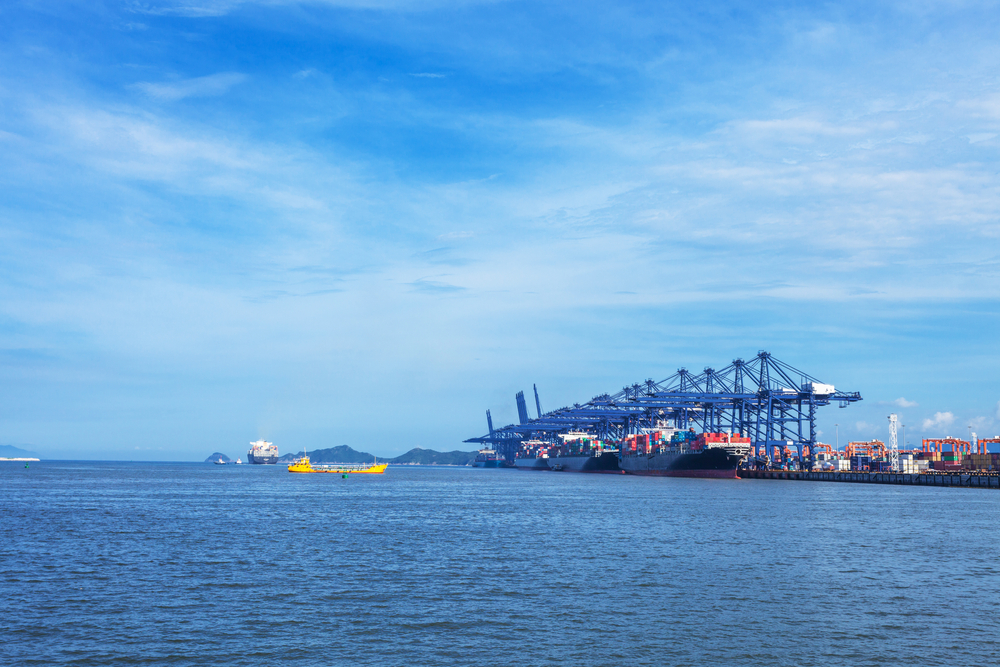 The below summary highlights futures positions and changes made by hedge funds across commodities, forex and financials up until last Tuesday, June 1. A week that saw S&P 500 trade mostly sideways near its record high while the technology sector lost steam. Treasury yields rose ahead of jobs data with the market pondering for how long the Fed can continue adding support amid rising inflation. The dollar held steady while the commodity sector recovered strongly from the May correction.

Given the strength of the recovery a relatively small increase that was led by crude oil (25k), gas oil (17k), natural gas (+11.7k), corn (21.9k) and sugar (12.5). Other contracts such as copper (-6.3k) and both wheat contracts (-5.7k) were sold despite recording strong price gains. Potentially a sign that investors despite being dictated by the price action to be long are feeling somewhat uncomfortable with prices at multi-year highs and breakeven yields (inflation) that has been drifting lower during the past three weeks. 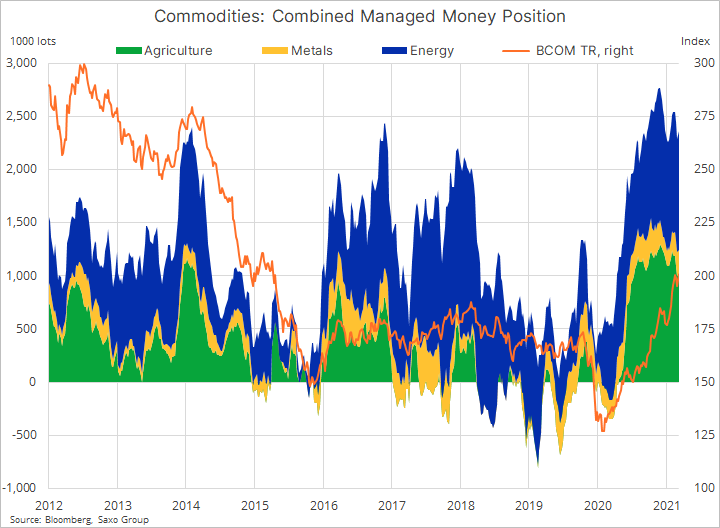 Most of last week’s commodity buying was concentrated in the energy sector, most noticeable crude oil and gas oil. OPEC’s bullish demand outlook for the second half combined with the OPEC+ groups ability to control the price, helped drive Brent above $70 while WTI reached levels last seen in 2018. In response to these developments hedge funds increased their combined crude oil net long by 25.2k lots to 649.5k, a three week high but still some 88k below the recent peak in February.

While the overall increase in both WTI and Brent was primarily driven by fresh buying, the bulk of the buying occurred in WTI. This in response to tightening US market amid increased demand for fuel and low stocks at a time where production is expected to show a much slower growth trajectory than the one we witnessed during previous cycles of rising prices.

Despite recovering strongly from the late May correction, only small changes were seen in soybeans and wheat. Corn received most of the attention with the 11% price spike driving a 21.8k lots increase, mostly due to short covering with potential buyers showing a degree of hesitancy as we move into the US growing season. In soft commodities, buying benefitted sugar, cocoa and coffee, and just like corn the net buying in coffee was primarily due to the short covering with buyers hesitating chasing the 7% rally seen during the week.

Gold buying ran out of steam with long accumulation slowing to just 2.9k lots, a far cry from the 61.3k lots that was net bought the previous three weeks. Having surged higher by 240 dollar since early April on a combination of technical buying and short-covering from large trend following funds, the lack of fresh buying last week could indicate that this initial demand has now been met. Also worth noting the reporting week up until last Tuesday did not take into account the US economic data related price swings that hit the market towards the end of last week. At 129k lots, the gold long remains well below the most recent 284k lots peak from March last year.

Elsewhere in the metal space, silver longs were reduced for a second week while copper selling extended to a fourth week. During this time the net long has slumped by 58% to just 27.6k, the lowest bet on rising copper prices since last June when the rally had only just started to gather momentum.

Latest: Gold trades softer in early trading following an end of week rollercoaster ride where prices first slumped on emerging profit-taking, only to bounce back on Friday following what looked like “Goldilocks” US payroll date. Gold’s so far shallow correction following the strong rally since early April potentially highlighting the risk that all is not done yet on that front. The first key downside support level that will determine the underlying strength of the market is the 200-day moving average at $1842. Focus on the dollar and whether yields can maintain their Friday drop, President Biden’s spending plan and the market reaction to the G7 tax proposal. 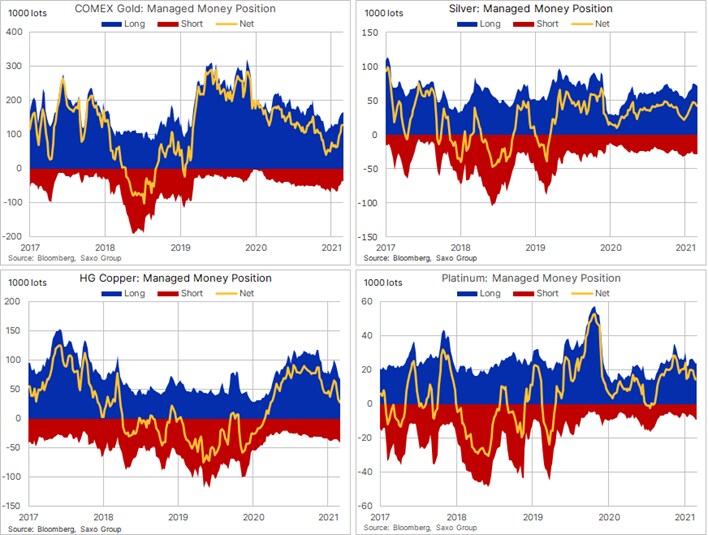 In forex, the flows in the week to June 1 were mixed while the overall sentiment was still skewed towards additional dollar selling. The net short against ten IMM futures and the Dollar Index reached a 12-week high at $17.7 billion after speculators net sold $900 million. Despite trading softer on the week, speculators continued to buy euros (5.3k lots) with buying also seen in JPY (3k), CAD (3.9k) and CHF (1.5k), while selling reduced the sterling long by 6.5k lots. 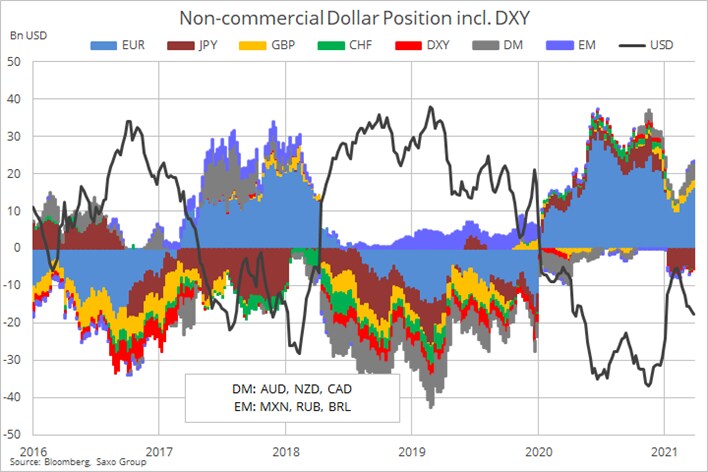