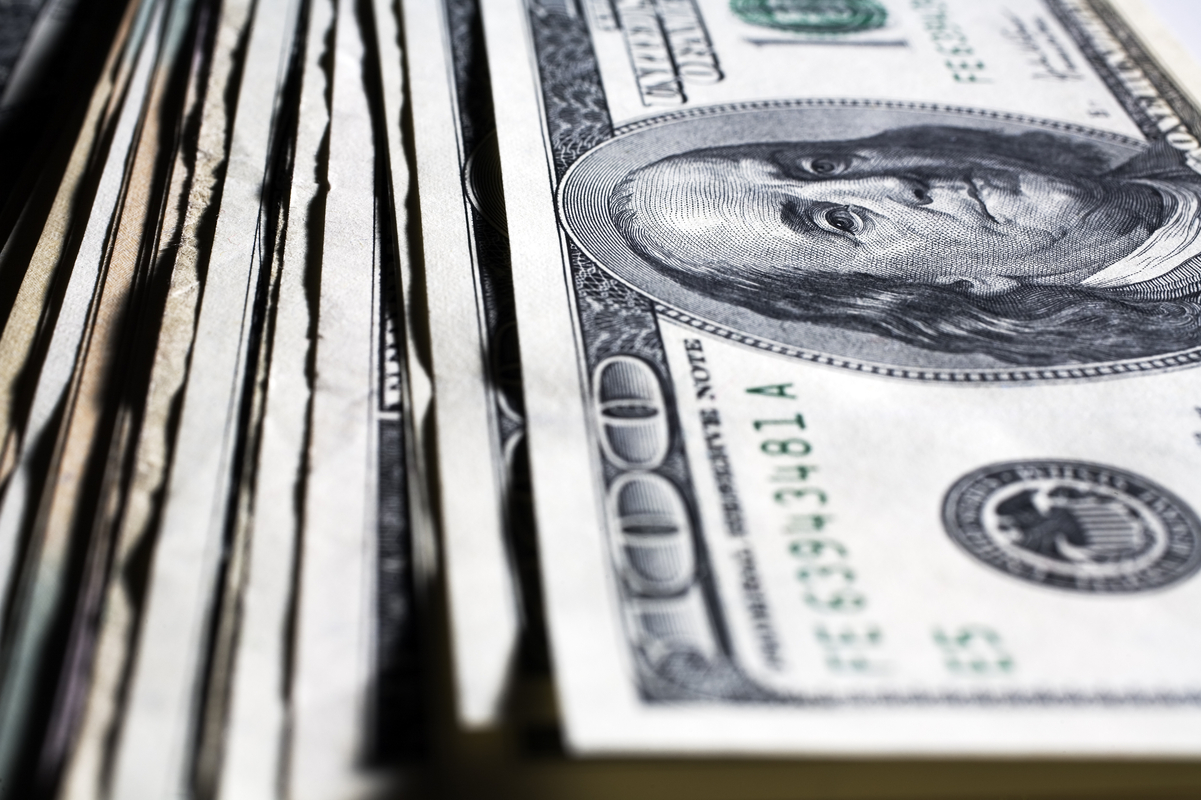 Europe’s single currency came under fire on Tuesday versus a broadly stronger US dollar amidst news that Russia will further cut gas supplies to the EU, together with the IMF slashing growth estimates. In other news, US consumer confidence took another hit, falling to 95.7 in July—its third monthly decline.

The risk of further depreciation for the euro remains, according to the technical landscape. Aside from an unequivocal downside bias since the beginning of 2021 on the weekly timeframe (primary bear trend), an additional headwind on the weekly scale is resistance at $1.0298. On the assumption that sellers remain in command, the weekly timeframe’s next downside objective rests at a 1.272% Fibonacci projection from $0.9925.

Meanwhile on the daily timeframe, support at $1.0182 suffered a breach, as expected. I noted the following in Tuesday’s technical briefing (italics):

Daily support from $1.0182 is unlikely to maintain its presence. In light of weekly, daily and H4 resistance seen between $1.0377 and $1.0298, as well as a decisive downtrend, I feel this will be too much opposition for bulls.

Further observations on the daily chart, of course, shows the relative strength index (RSI) levelling off south of the 50.00 centreline, movement that indicates negative momentum.

Technical action out of the H4 timeframe reveals sellers eventually regained consciousness from the decision point at $1.0276-1.0235. Booking further losses in this market swings the pendulum in favour of surpassing Quasimodo support at $0.9998 and shaking hands with a 1.618% Fibonacci projection at $0.9926 (alternate AB=CD bullish pattern taken from $1.0786).

A closer reading of price action on the H1 timeframe has the currency pair exploring territory beneath a week-long consolidation between $1.0270-1.0155. $1.01 is consequently within striking distance, with a break unearthing support from $1.0046 and parity ($1.00) once again.

Technically, price action favours sellers. As a result, tunnelling through $1.01 on the H1 timeframe could be recognised as a bearish (breakout) cue to take aim at H1 support from $1.0046, followed by parity.

Tuesday invited losses for the Australian dollar against its US counterpart, influenced by a risk-off environment that tends to weigh on risk-sensitive currencies, such as the New Zealand dollar, Canadian dollar, and Aussie dollar. The technical outlook, nevertheless, remains unchanged despite the AUD/USD finishing Tuesday off best levels.

As a reminder, the weekly timeframe boasts support between $0.6632 and $0.6764 (composed of a 100% Fibonacci projection, a price support, and a 50% retracement), an area weekly price action greeted in early July in the shape of a hammer candlestick formation (bullish signal).

Interestingly, resistance-turned support on the daily timeframe at $0.6901 was tested this week and, as you can see, has held ground for the time being. Daily resistance coming in at $0.7039 is seen overhead as an obvious upside objective, complemented by a 38.2% Fibonacci retracement ratio at $0.7051.

Against the backdrop of higher timeframes, scope to push higher from the H4 timeframe’s supply-turned demand from $0.6901-0.6862 to H4 prime resistance at $0.7062-0.7031 remains active, despite Tuesday erasing a portion of gains. This is strengthened by the H1 timeframe’s current trendline support, extended from the low $0.6681, with room to reach for at least the $0.70 psychological figure: a widely watched ceiling for this currency pair.

In similar fashion to Tuesday’s technical briefing, a whipsaw above $0.70 on the H1 to H4 prime resistance at $0.7062-0.7031 could be a setup the charts see play out to attract bearish players into the market, in line with the overall downtrend.

However, if the H1 trendline support cedes ground, this could be an early cue we’re headed back to $0.69 (and daily support from $0.6901). The break of trendline support, therefore, may unlock the door for a short-term bearish scenario.

It was a muted session for the USD/JPY on Tuesday as investors echo an indecisive tone ahead of today’s eagerly awaited FOMC rate decision (widely expected to increase rates by 75 basis points).

Recapping Tuesday’s technical briefing (below is repeat analysis due to lacklustre movement), this currency pair remains in a decisive uptrend. According to the weekly timeframe, a pronounced primary bull trend continues to grace the chart, underscoring strength since 2021.

However, in recent days, resistance on the weekly timeframe at ¥137.23 made a show and delivered a healthy bearish rotation that snapped a seven-week bullish phase. Whether this will be enough to wave in additional selling to as far south as weekly support from ¥125.54 is unlikely.

Out of the daily timeframe, nonetheless, supply-turned demand at ¥131.93-131.10 is likely to call for attention should sellers change gears and explore deeper waters. Daily resistance is seen at ¥139.55: a Quasimodo support-turned resistance level. As per the daily timeframe’s relative strength index (RSI), the popular momentum gauge has touched gloves with indicator support between 40.00 and 50.00, an area serving as a ‘temporary’ oversold zone since May 2021 (common in strongly trending environments).

The H4 timeframe reveals price rebounded from what’s often referred to as a Fibonacci cluster between ¥135.40 and ¥135.64. Within this area, technicians will note that we have a 1.618% Fibonacci projection (or an ‘alternate’ AB=CD bullish pattern). Many traders following the AB=CD formation will, therefore, likely pencil in the 38.2% and 61.8% Fibonacci retracement ratios at ¥137.03 and ¥137.92, respectively.

The combination of ¥137 and the 100% Fibonacci projection at ¥136.93 on the H1 timeframe, coupled with the H4 timeframe’s 38.2% Fibonacci retracement at ¥137.03 (first upside objective based on the H4 alternate AB=CD bullish pattern), could motivate sellers if tested. Nevertheless, knowing that we have H1 supply prowling above the said resistances at ¥137.57-137.30, a whipsaw above ¥137 resistance to test this supply should not surprise before sellers attempt to make an entrance.

Amidst resurging safe-haven demand for the US dollar, pound sterling finished mixed on Tuesday.

The blend of the widely watched $1.20 figure and the H1 timeframe’s trendline support, taken from the low $1.1760, delivered a floor on Tuesday as we crossed into US hours. This followed a H1 double-top ahead of $1.21. Therefore, continued interest to the upside might have buyers zero in on $1.21. Territory under $1.20 points to $1.19 given a lack of obvious H1 support.

Moving up the ladder, H4 price action, aside from a modest dip lower on Tuesday, is largely unchanged. Therefore, here’s a reminder of where I left the H4 chart in Tuesday’s technical briefing (italics):

Addressing the H4 timeframe, chart pattern enthusiasts will recognise the inverted head and shoulders pattern ($1.1876; $1.1760; $1.1890), joined by a neckline taken from the high $1.2056. As you can see from the H4 chart, buyers and sellers are squaring off around the aforementioned neckline and appear prepared to nudge higher.

While the H4 close above the neckline has likely drawn pattern traders in long, the H4 decision point at $1.2126-1.2098 must be taken into account. Should we overrun this area, then the pattern’s take-profit objective is seen at $1.2335.

Similar to the H4 chart, weekly and daily technical structure also remains unaffected by recent price movement. As such, the following text is taken from previous analysis (italics):

Through the lens of a technical trader, price crossed swords with weekly support at $1.1958 in recent weeks and, despite a dip to a low of $1.1760, the base has survived for now. Yet, additional GBP buying is questionable in view of the current downtrend.

Trend direction has been unmistakably bearish since February/May’s double-top formation on the weekly timeframe at around $1.4241 (2021). Furthermore, seen through the monthly timeframe, the long-term downtrend has been soft since late 2007 tops at $2.1161.

Reduced support is evident until the 100% Fibonacci projection ratio at $1.1683 on the daily timeframe. Overhead directs focus to trendline resistance, taken from the high $1.3639, and therefore could be a technical point we see sellers surface from in the event of a push higher. In conjunction with the weekly chart’s bearish vibe, the daily timeframe’s relative strength index (RSI) is seen testing resistance around its 50.00 centreline.

Longer-term technical studies show the rebound from weekly support at $1.1958 may encounter conflict at the daily timeframe’s trendline resistance. This might also hinder H4 head and shoulders traders long on the basis of the recent neckline breach as the daily trendline resistance is fixed beneath the pattern’s profit objective at $1.2335.

Overall, then, my attention remains on the daily trendline resistance around $1.2175, suggesting a bullish breakout north of $1.21 may be in the offing before sellers attempt to make a show from the daily descending line.

However, adding to the above analysis, should I see a H1 trendline support breach, this indicates sellers could take control and target at least $1.19.