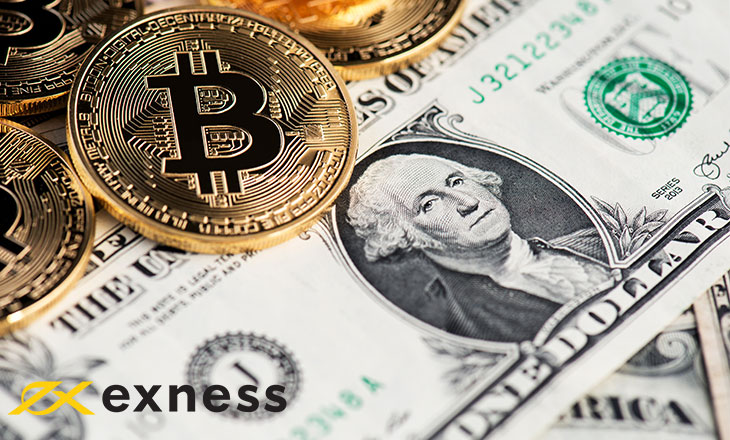 Michael Stark, analyst at Exness Education, agrees that the outlook for bitcoin is highly positive but doesn’t favour the narrative that this is mainly because of Elon Musk and Tesla having bought in.

For various reasons, bitcoin and Ethereum are really ‘digital assets’ more like gold than currencies in the usual sense of the term. The unique qualities of large-cap cryptocurrencies, especially after last year’s revolution in decentralised finance (‘DeFi’) and interest schemes, are what make them so popular among investors at the moment.

Derivatives like contracts for difference (‘CFDs’) and futures on bitcoin have also become more prominent since last year, especially in the case of futures. Futures on bitcoin offered by the CBOE, ICE and others posted numerous record daily volumes in 2020. For traders of CFDs, generally higher liquidity, lower spreads, removal of swaps in some cases and greater reliability of signals from futures can provide more and potentially better options to speculate without holding any transferable bitcoin.

The first and arguably best cryptocurrency, bitcoin was created over 10 years ago to function as a peer-to-peer electronic cash system. Many other cryptocurrencies have followed, but very few of them have significant utility as methods of payment.

Instead, most cryptocurrencies are used primarily as vehicles for investment with various different approaches. The average person holding transferable bitcoin appreciates it as a store of value, a hedge against inflation, an asset with strong potential for growth and for other reasons. ‘Digital asset’ first started being used widely to describe bitcoin and other cryptocurrencies in 2017: it has remained accurate because of sharp appreciations in prices and for other reasons.

While it’s true that in 2015 and before, it was relatively easy to mine more-or-less any coin if you had a powerful graphic card, this is definitely no longer the case. Highly specialised and expensive equipment is required to mine even fairly minor coins now, so bitcoin in particular is extremely challenging to acquire unless you’ve paid for it, given it or purchased it from somebody else.

The number of bitcoins is limited to 21 million, with 18.63 million or 88% of the maximum supply circulating in February 2021. All transactions in bitcoin are verified by blocks, with new blocks created roughly every 10 minutes.

By contrast, the supply of fiat money is unlimited and almost everybody is paid with it. Fiat money is affected by inflation, but the value of the euro or dollar in your pocket doesn’t change significantly from month to month. Huge amounts of new money were created by central banks around the world in 2020.

There’s just no reason for the average person to buy things with bitcoin, gold, Ethereum or really any other non-fiat asset. Why would you pay with something that you think will almost certainly appreciate in price over the next five, ten and more years?

Tesla’s purchase of $1.5 billion worth of bitcoin on 8 February was about 0.18% of the cryptocurrency’s total market capitalisation at the time. Against this, approximately 2.3 million bitcoins – nearly 15% of the total current supply – haven’t moved anywhere in the past six years according to data from CoinMetrics. The annual figure for 2020 from Digital Assets Data was nearly 11 billion BTC, about 60% of the total supply.

Now, according to blockchain.com, daily transactions remain about the same as in the aftermath of 2020’s crash. Crucially, they’re significantly lower than in Q2 2019, suggesting that the proportion of participants in bitcoin for the long term is increasing: 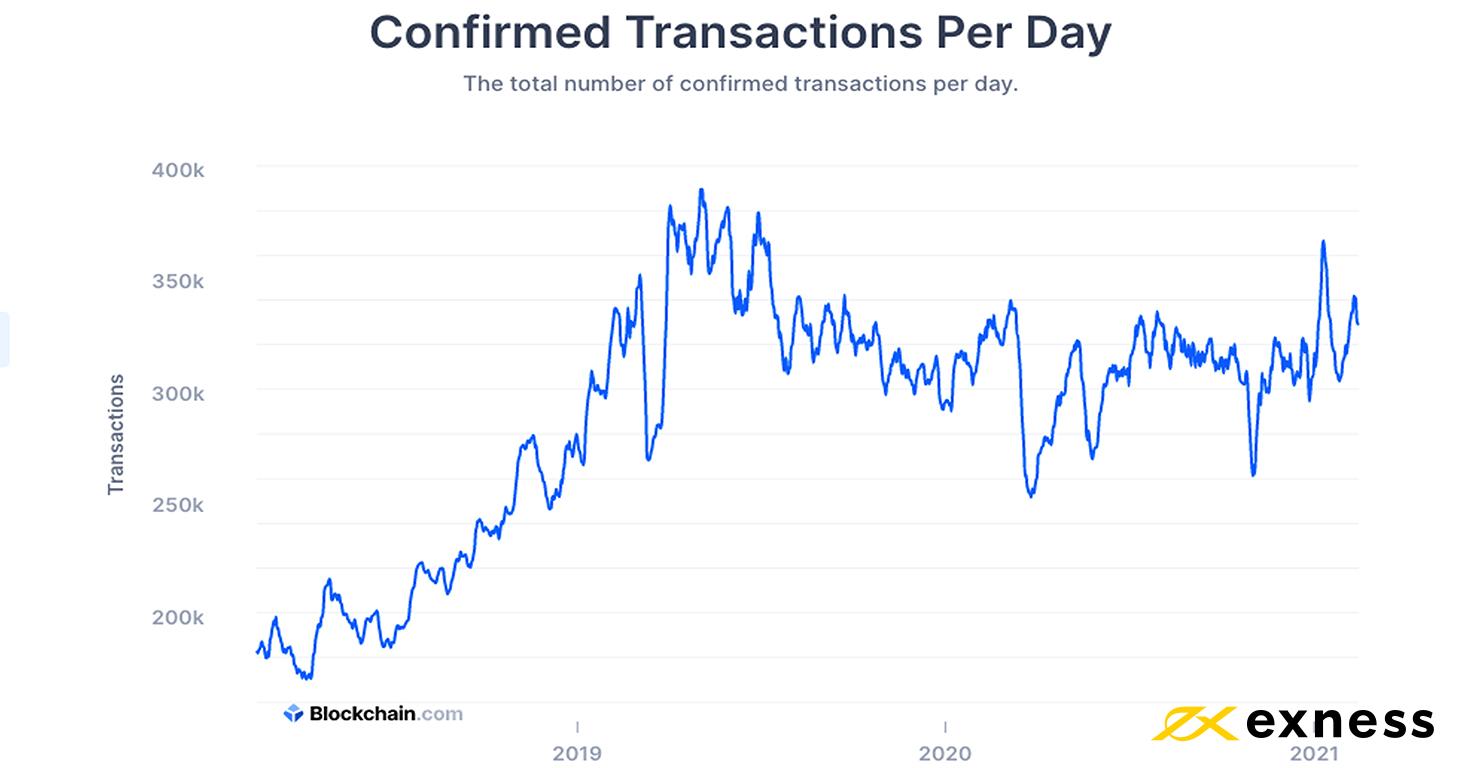 It’s clear that large numbers of investors bought bitcoin cheaply in March and April 2020 and continue to HODL. Sentiment rules in crypto markets, so if a very large community of HODLers thinks the price of bitcoin will go up, it probably will eventually.

The unique and revolutionary factor in favour of bitcoin late last year was interest. While DeFi was the source and saw significant interest among enthusiasts, other schemes with lower barriers to entry attracted huge numbers of average investors. Crypto Earn and similar programmes plus superchargers offered by exchanges gave investors APRs of up to 6 and 7% paid in bitcoin on deposits from 0.025 BTC.

This is what really seems to be driving the price of bitcoin upward. With zero or near-zero fiat rates in all major, advanced economies and many popular large-cap shares dramatically overvalued based on price: earnings, there are very few investments available that generate non-trivial cashflow. At the same time, record volumes of new fiat money from ultra-easy fiscal and monetary policies around the world have given many people spare cash to invest even as others struggle with unemployment and uncertainty.

Apart from Tesla, Morgan Stanley’s investment unit is also rumoured to be considering further involvement in crypto markets, specifically a significant purchase of bitcoin. Separately, MicroStrategy’s event Bitcoin for Corporations on 4 and 5 February involved about 1,000 CEOs and thousands of other attendees as Michael Saylor and others highlighted bitcoin’s potential as an investment for companies.

Morgan Stanley’s insights point to bitcoin’s increasing popularity as a store of value. However, for the average person who actively follows the price of bitcoin and major altcoins, none of the bank’s recent research is anything new. Bitcoin has been fairly widely seen as ‘gold 2.0’ for some time. It’s also quite obvious that if a large majority of participants are HODLers and have no desire to sell, bitcoin has at best limited practical value as a currency as opposed to an investment.

PayPal, Tesla, Morgan Stanley, Mastercard and any others adding bitcoin as an option for payments and buying relatively small amounts are definitely positive for sentiment. Nevertheless, here’s the bottom line: there’s absolutely no reason to pay with something that you think will almost certainly appreciate in price over the next few years which also pays potentially much higher interest than anything else.

Prophecies came thick and fast last year that the expansion of futures on bitcoin and greater involvement of financial institutions would lead to a reduction in volatility. This hasn’t happened: bitcoin is still one of the most volatile underlying assets for any CFD. 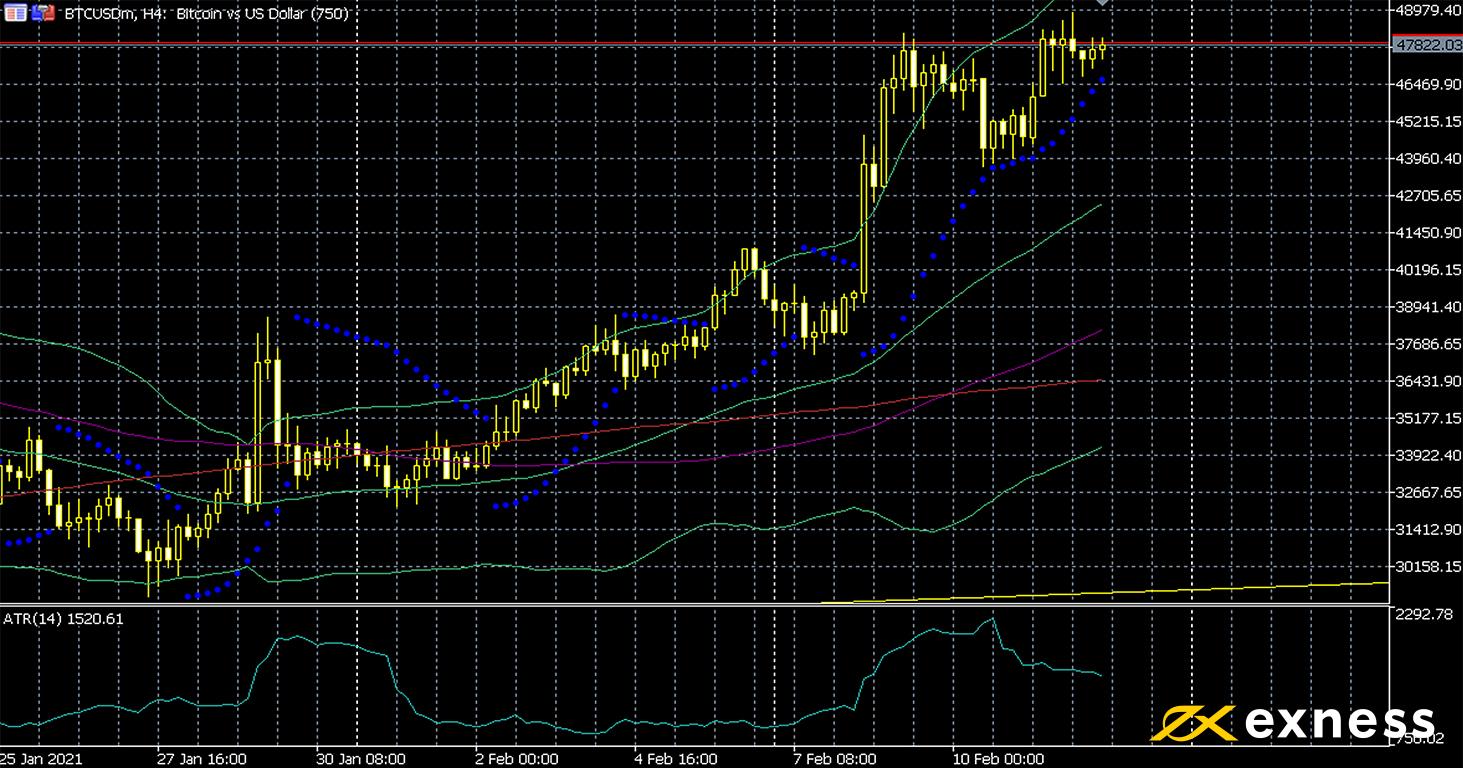 BTCUSD’s average true range (ATR) in February so far has reached as high as $2,160, about 5% of the price at the time and much higher than any other CFD with a roughly equivalent daily volume of trading. Volatility can provide opportunities for traders, but it can also increase risk significantly.

Traditional strategies for setting stops (stop loss) based on ATR multiplied by 1.5 or 2 could lead to very high potential losses if applied in the current environment. Instead, a simpler and potentially less risky approach would be to set stops based on areas of clear support on middle timeframes like hourly (H1) and four-hour (H4).

Crypto sceptics are fond of repeating that bitcoin has no fundamentals, so trying to understand the rationale behind movements with reference to anything other than sentiment is futile. There is an element of truth to this, but in 2021 fundamentals are likely to become more important because of the surge in retail investors looking for cashflow. As average rates of interest across exchanges fluctuate, one might expect strong movements by bitcoin.

With Exness, you can open the smallest trade for bitcoin – a micro lot, 0.01 lot – with less than $5 at the time of writing. This is a quick and convenient way to speculate on the price of bitcoin while limiting the sizes of potential losses.

Equally, if you want to understand the market more before you risk real money, Exness offers free demo accounts. You can use one of these to practise trading bitcoin against the dollar, yen and won with an accurate simulation of real conditions but no possibility whatsoever of losing real money.

One of the unique features of trading CFDs on bitcoin with Exness is the absence of swaps. Having no overnight fees means that you can hold any position as long as you like if your account’s equity is more than the margin requirement. What’s more, Exness Education analyses BTCUSD from a technical perspective most weeks, giving traders the lowdown on areas of possible importance on key charts.

Elon Musk doesn’t directly affect the already highly positive outlook for bitcoin based on both charts and fundamentals: it’s the community of traders and investors who do. You could also join this innovative market with just a few straightforward steps!

Disclaimer: the publication of analysis is a marketing communication and does not constitute investment advice or research. Its content represents the general views of our experts and does not consider individual readers’ personal circumstances, investment experience or current financial situation. Analysis is not prepared in accordance with legal requirements promoting independent investment research and Exness is not subject to any prohibition on dealing before the release of analysis. Readers should consider the possibility that they might incur losses. Exness is not liable for any losses incurred due to the use of analysis.

Risk warning: trading in CFDs carries a high level of risk thus may not be appropriate for all investors. The investment value can both increase and decrease and the investors may lose all their invested capital. Under no circumstances shall the Company have any liability to any person or entity for any loss or damage in whole or part caused by, resulting from, or relating to any transactions related to CFDs.