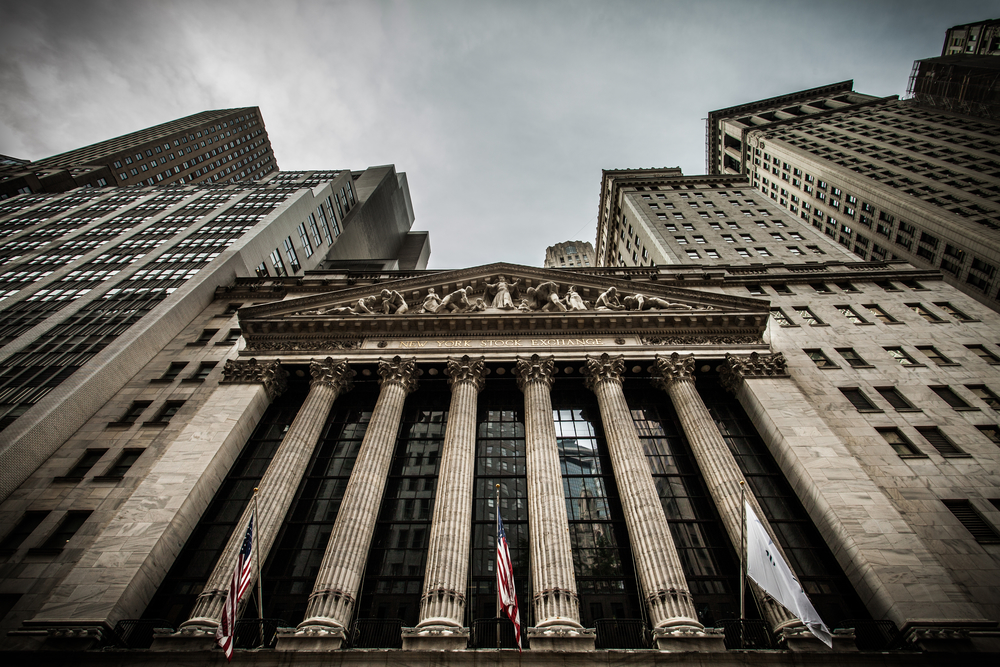 Since the Wyckoff spring pattern on 24 February 2022 that marked the temporary bottom in S&P 500, excessive supply has capped the upside of the rally. On 16 March 2022 there were a number of subtle bullish tell-tale signs showed up, which confirmed the short covering rally in S&P 500. This is similar to a Wyckoff change of character in the short-term as illustrated in the video for gold and crude oil, but to the upside in S&P 500.

The down swings (highlighted in blue) since 10 February 2022 were getting shorter in terms of the magnitude, which was a sign of exhaustion of selling. The high consistent of the supply as shown in the volume pane (annotated in orange) accompanied the down swings suggested supply absorption as downward results were not manifested. This was the first clue that the bargain hunters showed up, which created the bullish condition for a rally. Refer to the chart below: 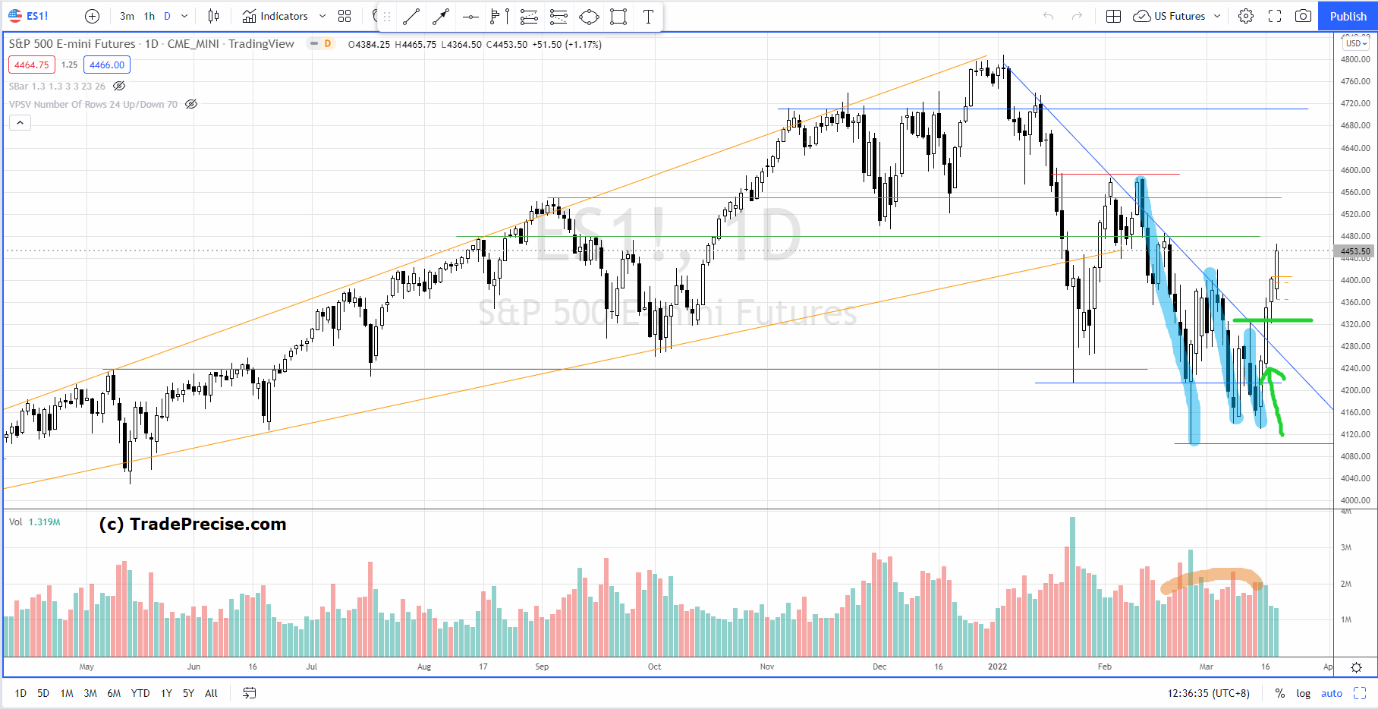 On 16 Mar 2022 (as annotated in green arrow), S&P 500 broke out from the down trend line, which acted as a strong resistance this year. Although there was a breakout on 9 February 2022, it was negated in the next bar as a failure. This was the second bullish reversal pattern in S&P 500.

This bar also overcame the last down commitment bar on 11 March 2022 and closed above its high as the third bullish pattern. This was significant because it signified a potential bullish reversal from there on. Majority of the short-sellers exited their positions because of the violation of this significant level hence propelling the rally further. This was reflected on the low volume rally on 17-18 March 2022, which was an ease-of-movement in the price action.

These 3 bullish patterns painted a bullish picture ahead for S&P 500. On 18 March 20, 2022, S&P 500 broke above the axis line where the previous support-turned-resistance, suggested a bullish continuation to test the resistance zone between 4480-4600.

This zone is a strong resistance area where the previous breakdown and rejection happened. Short-sellers are naturally attracted to this zone to initiate short positions.

Based on the Wyckoff phase analysis, S&P 500 is likely in phase B after a secondary test as a spring type action followed by two tests with supply absorption characteristics. It is on its way up to test the resistance zone as define by the automatic rally (AR). Refer to the chart below: 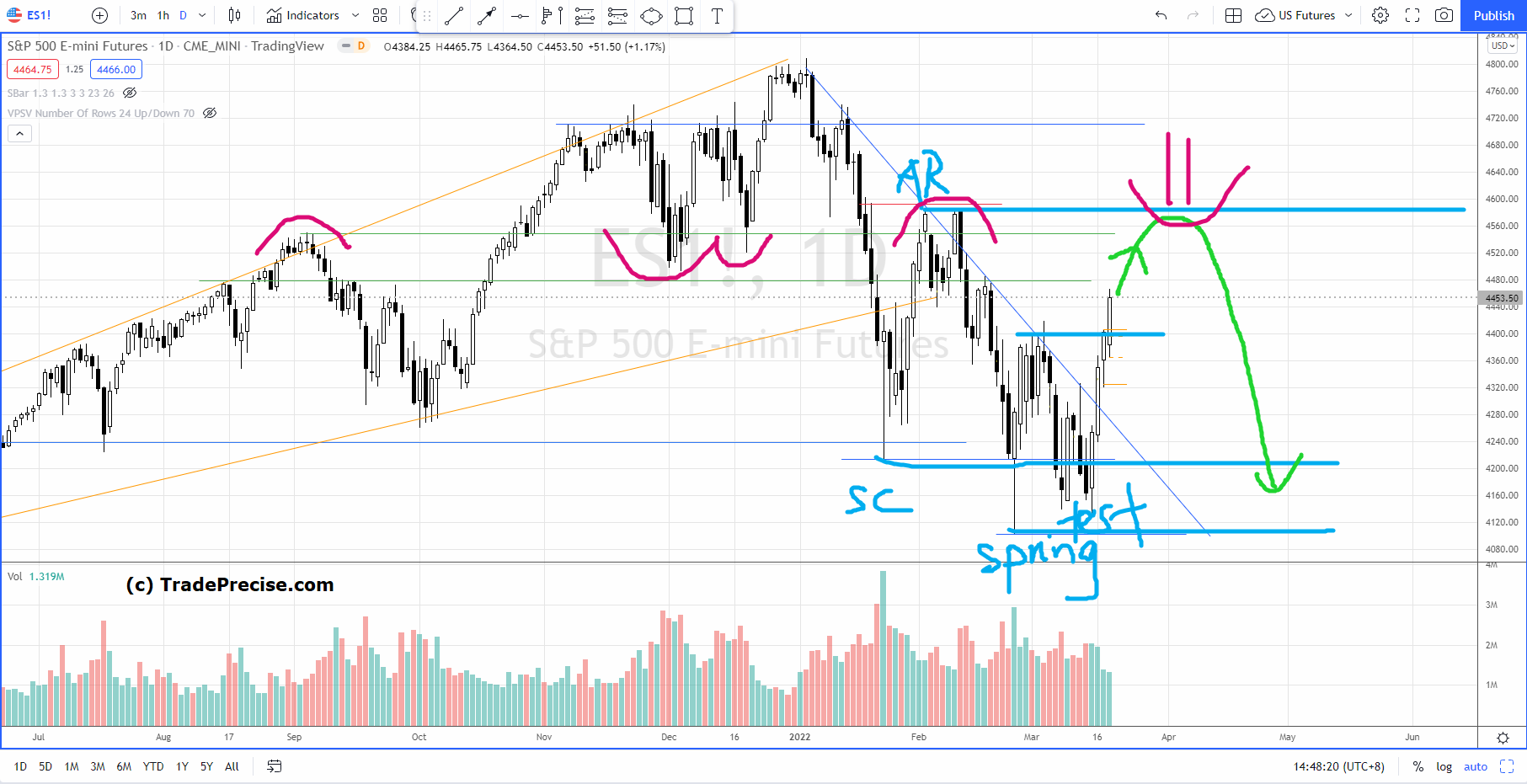 As the long-term trend is still down, the short-term bullishness is expected to be met by the dominating supply after a test of the resistance zone (as annotated in the green path). Detail analysis will be conducted in the Wyckoff trading method live session to interpret the supply and demand in conjunction with the price action in order to derive the directional bias as shown in the video. It is crucial to pay attention to how the price interacts with the key resistance zone between 4480-4600.

The strong rally in the past week was great for bullish trade setup for swing trading. The bullish market sentiment is also reflected in my stock screener where the bullish setup outnumbers the bearish setup (274 vs 14). Refer to the screenshot below: 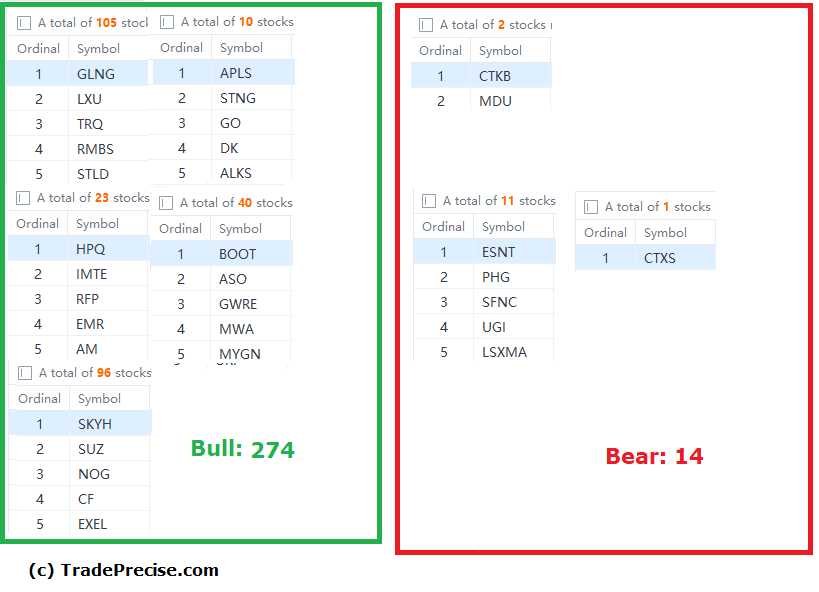 The focus of the stock selection is still on those outperforming stocks instead of the oversold stocks (like a lot of the technology / growth stocks). Majority of the soft and hard commodity stocks experience a healthy pullback / consolidation. Bullish continuation is expected to carry on in this group. Visit TradePrecise.com to get more market insights in email for free.