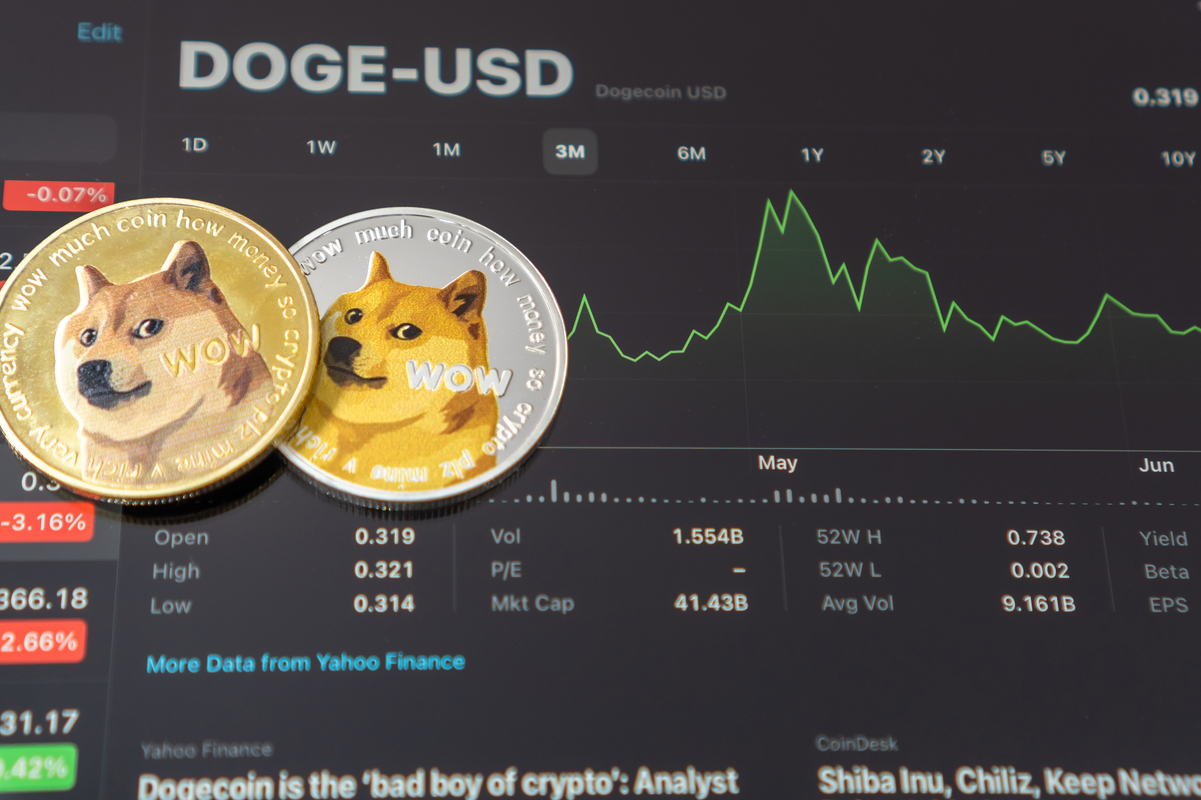 Dogecoin is the worst performing cryptocurrency in the top 20 by market capitalization on Thursday over the past 24 hours, according to CoinMarketCap. Over this time period, the cryptocurrency has fallen about 9%. DOGE/USD was last changing hands just below $0.069, a near 11% drop from the multi-week peaks it hit on Wednesday above $0.077.

Despite the recent pullback from highs, Dogecoin still looks good from a technical perspective. It found support earlier in Thursday’s session at its 50-Day Moving Average in the $0.0670s and also remains above its 21DMA. Moreover, much of Dogecoin’s upside on Wednesday was spurred amid a breakout above a downtrend that had been capping the cryptocurrency’s upside since mid-May.

DOGE/USD has remained above this downtrend, which is now acting as support, on Thursday, despite the recent pullback. Short-term speculators may see Dogecoin as an attractive buy at current levels. They may want to target a move back to weekly and late-June highs in the $0.077-$0.079 area over the coming sessions.

A break above here could open the door to a run higher towards some highs from May/early June in the $0.090-$0.095 area and then a test of $0.10. But a breakdown back below the 50 and 21DMAs would deal a significant blow to short-term bullish hopes and signify that Wednesday’s move higher could have been a false breakout.

Tesla Sells Bitcoin But Not Dogecoin

In a call with investors following the release of Tesla’s Q2 earnings report, CEO Elon Musk confirmed that Tesla had sold down 75% of its Bitcoin holdings for $963 million. Musk said “the reason we sold a bunch of our Bitcoin holdings was that we were uncertain as to when the COVID lockdowns in China would alleviate”.

“It was important for us to maximize our cash position, given the uncertainty of the COVID lockdowns in China”, Musk continued, adding that Tesla is “open to increasing our Bitcoin holdings in future… So this should not be taken as some verdict on Bitcoin”.

Tesla merch can be bought with Doge, soon SpaceX merch too

Tesla currently holds $218 million in digital assets, according to its latest earnings report. It is unclear as to how much of this is Dogecoin.

Dogecoin has been volatile in recent months after Elon Musk tendered an offer to purchase Twitter that has since fallen through. Dogecoin HODLers had hoped that Musk would promote Dogecoin as a form of payment on the platform that could have boosted its notoriety and adoption.

Solana is the joint second worst performing top 20 cryptocurrency over the past 24 hours alongside competitor Cardano, according to CoinMarketCap. Over this time period, the native token to the Solana blockchain SOL has slumped roughly 8.0%. It is currently changing hands just above $41 per token, down about 2.0% on Thursday and now down over 13% since earlier weekly highs around $47.50.

However, the cryptocurrency’s near-term technical outlook still looks good. SOL/USD has seen a decent intra-day rebound from earlier session lows under $40. The cryptocurrency bounced from support in the form of the 8 July high and a downtrend that had been capping the price action since early July prior to Monday’s break higher.

SOL also continues to trade well above its 21 and 50DMAs in the $36-$38 area. Short-term speculators may see current levels as attractive to add to SOL longs and target a retest of recent highs in the upper $40s per token.

Despite the fact that most of the rest of the cryptocurrency market is moving lower amid profit-taking, concerns about further crypto winter casualties and Tesla’s Bitcoin sales, the native token to Monero’s privacy-focused blockchain XMR has continued to gain on Thursday. According to CoinMarketCap, the cryptocurrency is the best performer in the crypto top 50 with gains of around 5% over the last 24 hours.

XMR was last trading just below $152.50 and near its highest levels since 13 June. The cryptocurrency has seen an impressive more than 30% surge since last week’s lows in the $115 area. Its latest surge has seen it break substantially above its 50DMA for the first time since April. Prior to then, the 50DMA had on two key occasions provided significant resistance.

As a result, XMR traders may view the latest resurgence in the cryptocurrency’s price as signalling a shift in near-term momentum. As such, many will now likely target a test of the 200DMA at just under $180 per token.