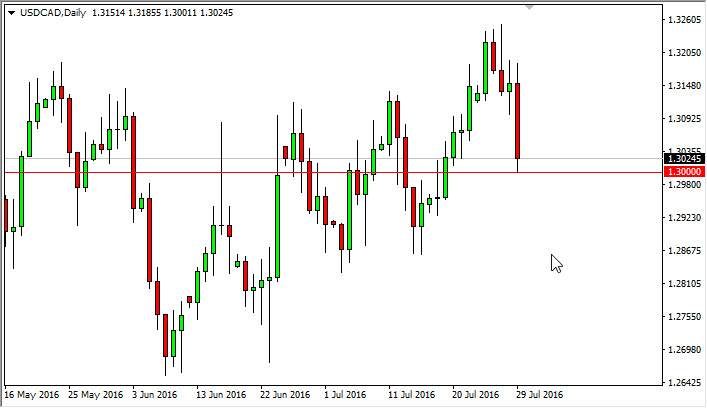 The USD/CAD pair fell significantly during the course of the session on Friday, slamming into the 1.30 level. However, I can make an argument for a decent uptrend line just below, and of course oil markets or falling. So having said that it is only a matter of time before this market rallies, as the Canadian dollar is so sensitive to the market. Also, the US dollar has been pulling back a bit over the last couple of days, but quite frankly we still see quite a bit of bullish pressure in the greenback overall.

I am simply waiting for some type of supportive candle or some type of supportive candle in order to go long. I believe that the market could very well find itself going all the way to the 1.35 level given enough time, and I do recognize that it could be a bit of a fight getting up there. However, as long as the oil markets struggle, the Canadian dollar will continue to lose value, especially if the US dollar. With this being the case, I feel that the market could also be described as trading in an uptrend channel, so we could just simply go back and forth given enough time. I still believe in the bullish presence of US dollar buyers of, and I also believe that we will eventually break above the 1.35 handle as well. I have no interest in selling this market until we break down, at least not until we get down below the 1.28 handle. But it would still be hard underneath there as there is so much in the way of support below.

The Canadian economy is doing fairly well, when looking at the rest of the world but it is still lagging behind the US economy. With this, it’s probably only a matter of time before the market finds reason to go long, especially as the Bank of Canada looks very likely to be dovish over the longer term, and as a result it’s likely that the Loonie continues to slip.