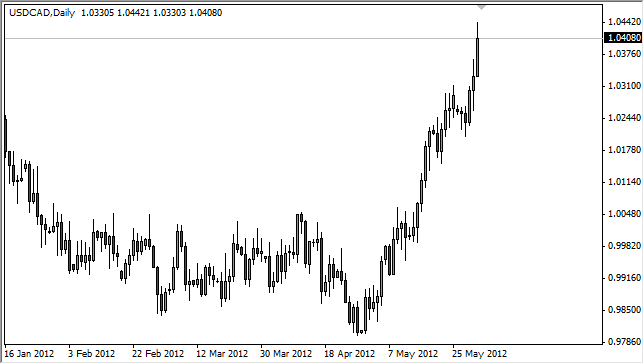 The USD/CAD pair shot straight up for the session on Friday as the Non-Farm Payroll number came out very weak. The mere 69 thousand jobs that America added suggests that the demand for Canadian crude will be very weak in the near term. The Canadians send over 80% of their exports to the United States, and it looks as if their biggest customer is struggling to keep a job. This is never good news economically for an exporter, and as a result this punished the Canadian dollar.

The break out above the 1.03 level was a significant move, and the Chinese slowing down is a bit of a “double whammy” at this point, as the Canadians will simply find themselves selling less crude overall. The Canadian economy is highly leveraged to the commodity sector, and as long as the commodities like oil, gold, and natural gas all suffer, the Loonie will be soft in general. If the United States continues to be weak – the pair should shoot straight up.

The pair is known to grind sideways for long periods of time only to make sudden and violent moves. It looks as though we are in one of those periods now, and as long as the markets can stay above the 1.03 level, we should be in supercharged bullish mode. Of course, a break below that still has to contend with the 1.01 to parity level as support, and we would be willing to buy candles that looked supportive in the area. In fact, it isn’t until we break below the parity level that we would suddenly think of selling in this pair as the breakout above the 1.01 level was so significant. The breaking of the 1.03 level was simply an exclamation point on the bullish move that continues to impress us.

The buying of hammers after small dips is one of our favorite trades, and we think we may see a few. The 1.03 level should be supportive, and a break of the candle form the Friday session would force us to buy as well.