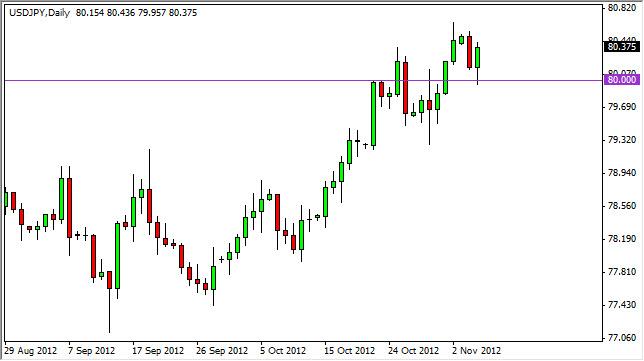 The USD/JPY pair bounced fairly hard off of the 80 handle during the session on Tuesday, and formed a green hammer. This pair is essentially waiting the results of the US Presidential election, and as such did very little during the day.

If the incumbent Obama wins, this should be dollar negative and send this pair lower. However, the Bank of Japan is below and willing to defend this pair if it falls too far. As for a win by Gov. Romney, this would be pro-dollar and should send this pair significantly higher. This would essentially bring in a new era of American monetary tightening in the near future, while the Japanese are still expanding their monetary  policy. In essence, this is become a fundamental trade, and not a technical one.