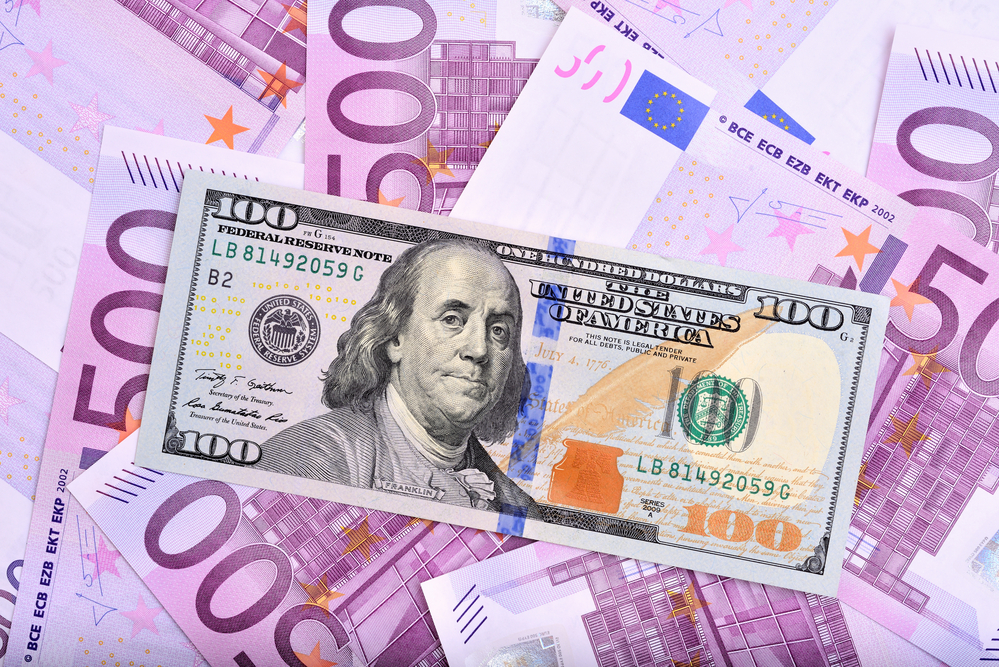 Against a basket of six foreign currencies, the US dollar index (ticker: DXY) advanced 0.8 percent last week and retrieved a hefty share of the previous week’s downside.

Friday’s 0.6 percent climb seats 21st July high at 93.19 and 31st March high at 93.44 in the firing range this week, with continued interest to the upside directed towards Quasimodo resistance from 93.90. Notably, this level is accompanied by several Fibonacci ratios between 94.07 and 93.90. Commanding attention here is the 100% Fib projection at 93.90. Harmonic traders will acknowledge this level as an AB=CD barrier, a base also bringing a 1.13% BC Fib extension at 94.03 to the table.

Trend studies, as noted in previous weekly writing, reveal the greenback has echoed a recovery phase since the beginning of 2021, following a sizeable decline during 2020. After realising support at 89.34 (a level displaying historical significance), 2021 trades higher by 3.2 percent year to date.

In terms of momentum, the relative strength index (RSI) rebounded from support at 40.76-47.49 at the beginning of August and wrapped up last week toying with space ahead of overbought. Of note within this range is resistance at 73.00.

Upbeat US non-farm payrolls kept the US dollar and US Treasury yields on the winning side of the table Friday, weighing on EUR/USD.

The one-sided decline (0.6 percent) has the currency pair within range of retesting the upper edge of a breached falling wedge (between $1.1847 and $1.1975), which happens to be set just north of Quasimodo support at $1.1688. It’s important to recognise 31st March low at $1.1704 is arranged above the Quasimodo—sell-stops are likely positioned below here.

With regards to long-term trend, we have been somewhat directionless since the beginning of the year, despite healthy gains in 2020.

The technical picture out of the relative strength index (RSI) shows the value shook hands with resistance at 51.36 as we transitioned into August and subsequently ruptured trendline support, taken from the low 27.11. This unlocks a bearish scene and possible movement to oversold space.

From the monthly timeframe, price is engaging support at $1.1857-1.1352, a technical zone that may motivate a bullish scenario between Quasimodo support at $1.1688 and the upper edge of a breached falling wedge (between $1.1847 and $1.1975) on the daily timeframe this week.

Month to date, August is up 0.1 percent.

Friday observed sellers step forward, boosted on the back of optimistic US non-farm payrolls data. This could lead to a test of $0.7273 this week.

With respect to trend, 2021 is underwater right now, emphasised by the close below the 200-day simple moving average at the beginning of July.

In terms of momentum, the relative strength index (RSI) remained under the 50.00 centreline last week, and is currently testing the mettle of support at 41.63.

Technical elements on the H4 scale recently forged a head and shoulder’s top formation around the underside of a 38.2% Fib retracement at $0.7408. Technicians will note the head and shoulder’s neckline was absorbed on Friday, consequently unlocking downside towards the pattern’s profit objective at $0.7328.

Following an earlier retest of $0.74, downside gained speed and linked with trendline support, taken from the low $0.7289. Dethroning the aforementioned trendline support, as the H4 timeframe suggests, directs awareness to Quasimodo support at $0.7323, closely followed by $0.73.

Meanwhile, the relative strength index (RSI) welcomed oversold status on Friday, bumping heads with support at 27.02. Oversold is considered a range where selling interest could diminish.

Scope to navigate deeper water on the monthly timeframe places daily resistance at $0.7453-0.7384 in a favourable light, technically speaking. As a result, bearish flow targeting the daily timeframe’s 1.272% Fib projection at $0.7273 is potential movement to be mindful of this week.

The H4 timeframe dropping through the head and shoulder’s neckline on Friday—revealing the pattern’s profit objective at $0.7328—suggests H1 trendline support, drawn from the low $0.7289, may be fragile.

A trendline breach, therefore, opens up possible moves to H1 Quasimodo support at $0.7323, stationed just under the head and shoulder’s pattern objective at $0.7328 on the H4.

Month to date, August trades 0.5 percent in the green.

A mid-week bullish outside reversal off support at ¥108.75 (and 61.8% Fib retracement at ¥109.07), followed by Friday’s healthy USD bid—influenced by strong US employment numbers—absorbed local trendline resistance, forged from the high ¥111.66.

Momentum studies out of the relative strength index (RSI) shows the value elbowed above the 50.00 centreline last week, a move displaying average gains outweigh average losses. Despite this, the indicator has resistance around 54.00 to overcome before reaching for overbought territory. As such, 54.00 should be monitored this week.

Noted demand at ¥109.77-109.84 is in a unique position, from a technical standpoint. Not only is it located south of ¥110—a psychological level prone to whipsaws—it’s situated in line with market direction (each higher timeframe analysed displays scope to navigate higher terrain).

From the relative strength index (RSI), however, the indicator exited overbought space on Friday after making contact with resistance at 78.38. This shows that despite Friday ending on the front foot, momentum to the upside has begun to slow and could be a red flag for buyers at current prices.

The monthly timeframe unveiling space to climb higher after April retested the descending resistance-turned support, taken from the high ¥118.66, and Friday ousting local trendline resistance, forged from the high ¥111.66, signals bulls have the advantage going into the new week.

With the above, two bullish scenarios may surface this week:

Since February, GBP/USD has echoed an indecisive environment south of $1.4377: April high 2018. This follows December’s (2020) trendline resistance breach, taken from the high $2.1161, a descending barrier possibly serving as support if retested.

The technical landscape on the daily chart is interesting.

Quasimodo support at $1.3609 welcoming buyers on 21st July not only elevated the currency pair above the 200-day simple moving average at $1.3747, technicians will also note price elbowed under a double-top pattern neckline at $1.3670 (double top formed between 24th Feb high at $1.4241 and June 1st high at $1.4250). Therefore, subsequent recovery gains have likely drawn in sellers in search of better pattern entry levels.

The flipside, of course, is last week introduced the possibility of a bullish pennant, formed between two converging descending lines taken from $1.3983 and $1.3888.

As for momentum studies, we’re seeing upside momentum diminish north of the 50.00 centreline. This is understandable given price spent last week carving out a potential pennant formation. Ultimately, pennant traders will be watching for the RSI 50.00 centreline to hold ground.

Aiding the lower wall of the daily timeframe’s bullish pennant is Quasimodo support at $1.3862 on the H4 scale. Technical observations also show a 100% Fib projection close by at $1.3851 and a corresponding 1.27% BC Fib extension at 1.3852. Interestingly, south of here we can see an additional gathering of Fibonacci ratios between $1.3813 and $1.3826.

Regarding the relative strength index (RSI), the indicator recently rebounded from oversold space and might form what’s known as a bullish failure swing if we hold above 30.00.

Based on the daily timeframe’s technical position: trading above the 200-day simple moving average at $1.3747 and in the process of forming a bullish pennant pattern, buyers could take control this week and approach resistance at $1.4003.

Support between $1.3813 and $1.3862 on the H4 may generate interest early week, positioned alongside the lower edge of the daily timeframe’s bullish pennant pattern.