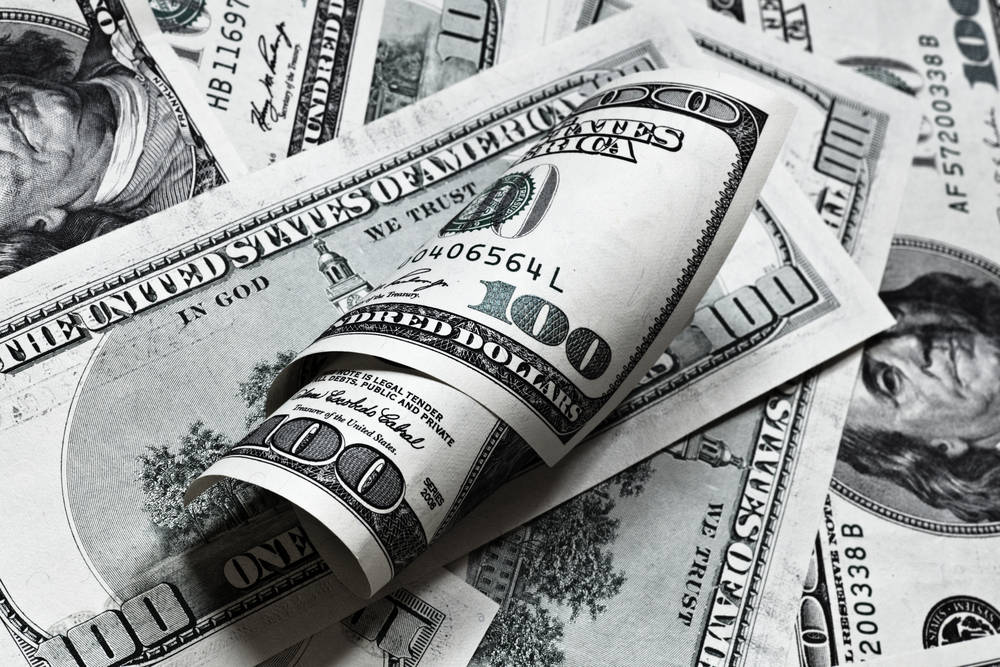 With the recent rally this past week in the dollar, it is important for investors to understand why such a move matters. For those who love charts, this article is for you.

The most obvious and well-known correlation between the dollar and equities is the association of a weak dollar with the outperformance of most commodities and real assets. It is no coincidence the significant gains in commodities over the past 12 months have come during a period of a declining dollar. We can clearly see this inverse relationship in play by comparing the performance of copper and oil against the dollar.

Dollar & bondsFrom a fundamental perspective, these relationships make sense. A stronger dollar is generally a function of a contractionary or disinflationary outlook. During deflationary shocks à la March 2020, dollars are in high demand and act as a safe haven or risk-off asset. Conversely, a weaker dollar is generally a function of economic growth and rising inflation expectations.

What this means is the dollar tends to appreciate when bond yields fall. This comes about due to the safe have characteristics of the dollar. If the economic outlook looks sluggish and appears to be slowing down, we tend to see money flow into dollars, and by extension, we see money flow out of the growth and inflationary dependent sectors and asset classes of commodities, small caps, cyclicals, industrials and materials and into those of a defensive nature.

Perhaps the most well-known implication of dollar strength or weakness is the performance of foreign and emerging markets relative to the US. Emerging markets in particular are inherently cyclical and dependent on the dollar. This is particularly the case for those countries with high levels of US dollar denominated debt or the commodity producing countries.

A rising US dollar causes the domestic currency of emerging economies to fall and inflation to rise amid weaker economic growth. Contrary to a developed economy whose economic growth is generally associated with inflation, being beholden to foreign-denominated debt reverses this dynamic. Higher inflation results in the central bank needing to raise interest rates and sell their foreign exchange reserves to defend their currency from hyperinflating, which acts as a further headwind to economic growth and exacerbates this dynamic in a self-reflexive manner.

These countries are unable to simply print money to monetize the debt, as is commonplace in developed countries whose debt is denominated in their own currency. The governments will then look to use fiscal policy as a means to stimulate, resulting in increasing budget deficits at the same time foreign and domestic capital flees the country for a safer alternative to preserve wealth, resulting in a negative current account balance along with a budget deficit.

Of course, these dynamics work in reverse too when the dollar is falling and create an economic tailwind that results in strong economic growth and asset price appreciation generally superior to developed markets. As the domestic currency strengthens, inflationary pressures fall, allowing the central banks to lower interest rates whilst the economy is booming, spurring lending and reinforcing growth.

At the same time, the governments are not required to run budget deficits, nor are the central banks required sacrifice their foreign currency reserves and run current account deficits to defend their currencies. You could almost think of a rising dollar as a form of quantitative tightening for most emerging markets, whilst a falling dollar could be considered a form of quantitative easing.

Therefore, for one to be willing to bet on the outperformance of EM relative to US equities, one must have a bearish outlook for the dollar.

Is this dollar rally sustainable?

In my view, the dollar has appeared to be in need of a rebound for a few months now. To be clear, we are far from seeing the start of a new trend higher in the dollar, but, as the consensus towards the dollar has been and remains almost exclusively bearish, it is not often we see price action conform to consensus.

Speculators are still betting heavily against a rally in the dollar. 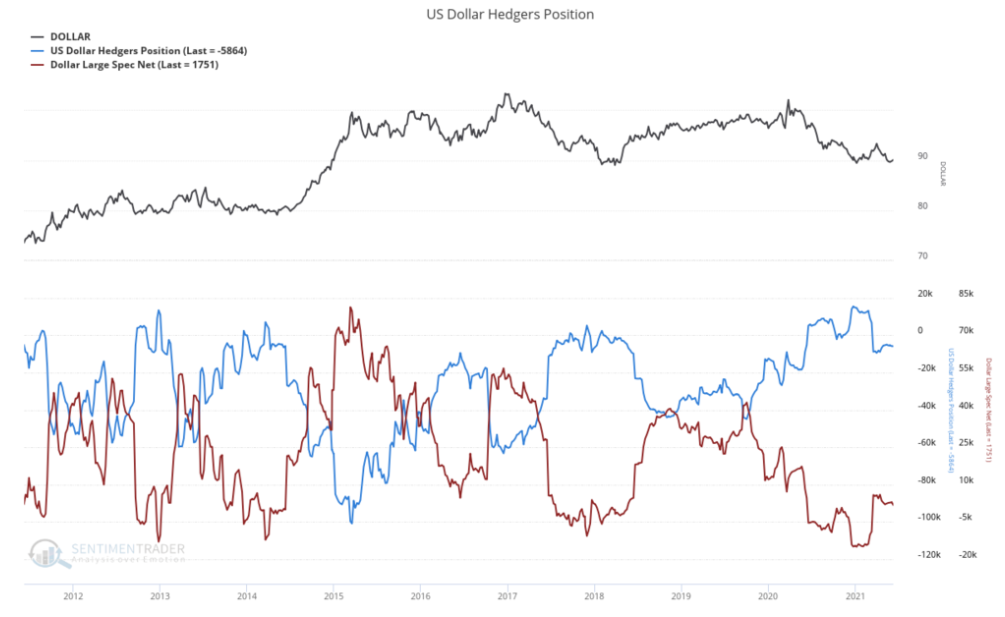 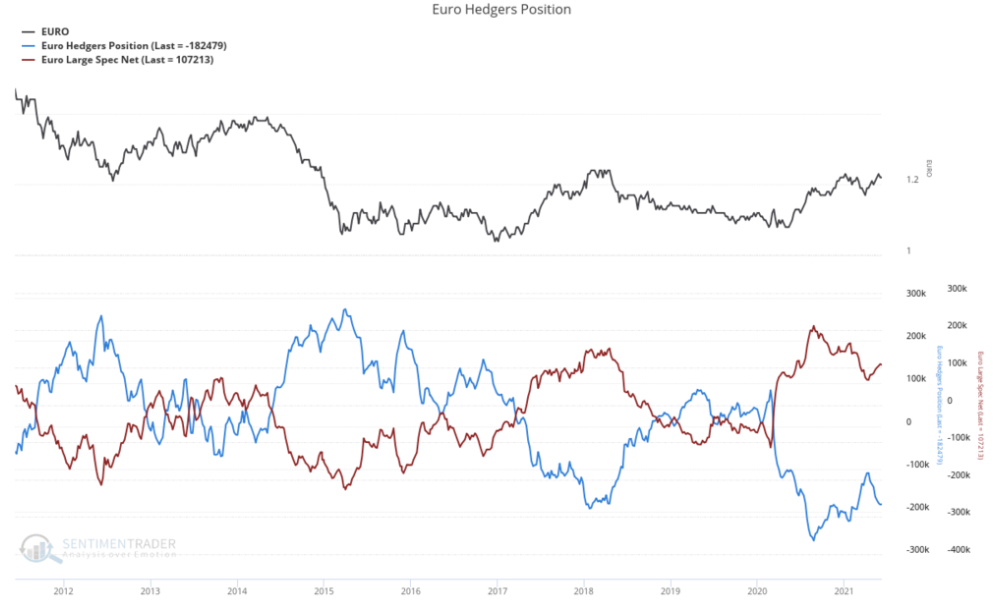 Technically, the coming weeks will be telling for both the dollar and the euro. With a potential head and shoulders bottom forming on the dollar index, and conversely a head and shoulders top for the euro, should these patterns follow through and the dollar move further to the upside, many of the “consensus” inflationary and growth orientated trades in which investors are all in on, may experience a period of underperformance. 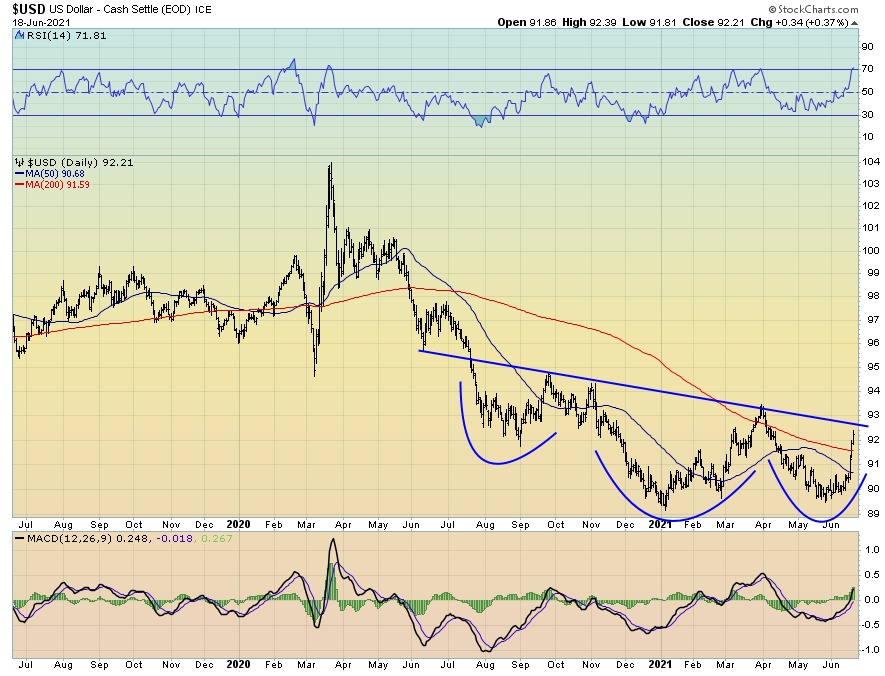 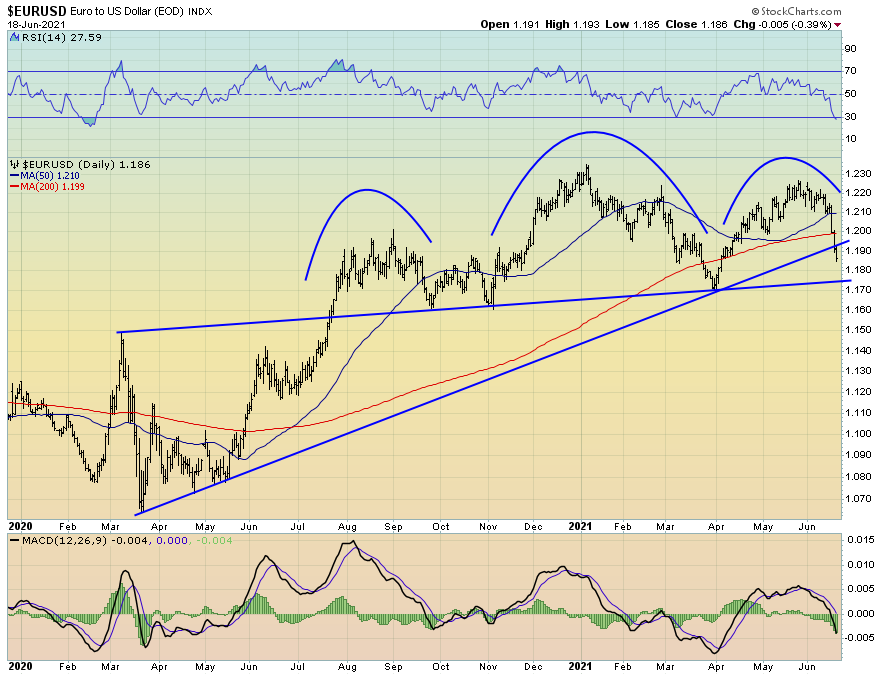 A continued rally in the dollar over the coming months may well be a signal the inflation trade has gotten too ahead of itself. I have written previously how this may be the case. What’s more, the bond market also appears to be signaling a pause in this narrative for the time being, as I too mused upon recently. If the dollar does move higher, expect to see reflation trades dip and thus the outperformance of defensives, utilities, bonds and tech.

Regardless of whether we do see a meaningful move higher over the coming months, it is important for investors to understand the implications of such a move, as is the purpose of this article. Whilst a move higher would not bode well for risk assets, it would likely be unsustainable and thus brief.

With US debt to GDP at an all-time high of 130%, US net international investment position (NIIP) of -65% of GDP, lack of foreign investment in treasuries and an economy heavily reliant on the appreciation of equity prices, for mine, policy makers will understand the damage a dollar rally could cause. In the long-term, I do remain in the dollar bear camp. However, we need to see a rally and wash-out of the negative sentiment before the downtrend is able to continue.

Finally, I will leave you with this excellent chart by Julien Bittel, summarizing the relative return of the major equity sectors and asset classes to moves in the dollar.