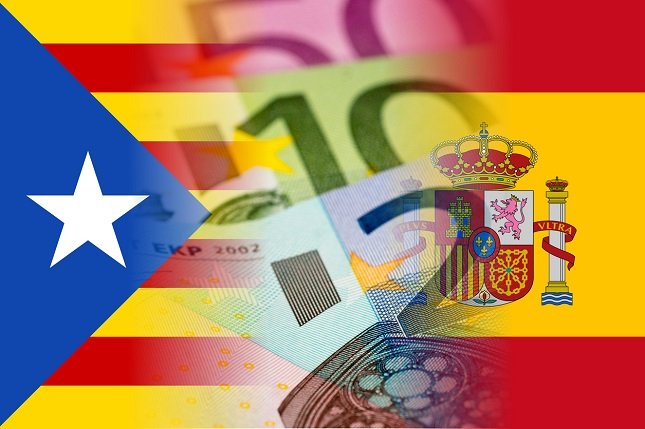 Tensions have been recently rising in Spain, particularly in the run-up to the Catalonia independence referendum. The Spanish constitution explicitly forbids such a referendum, but this didn’t stop the Catalans from trying to have it. The day of the referendum was a particularly eventful one, as the Spanish government tried hard to prevent it from happening. They were heavily criticised for deploying the police (with particular force, on occasion) against mostly peaceful and unarmed Catalans.

Those events didn’t do them any favors and have now led to a potentially explosive situation. The Catalan leader will address the parliament and many are tipping him to declare the birth of a new republic. Given the government’s approach so far, it’s possible that any potential bridges have now been burnt, and hence a compromise from both sides is looking more unlikely.

Catalonia numbers around 7.5 million people, which represents roughly 16% of the Spanish population. That’s a significant portion of the country and a large number in its own right – 7.5 million is nearly the size of Switzerland or Austria, and larger than Serbia, Denmark, Finland or Slovakia. Of those people, around 43% managed to vote and the result was a resounding “Leave” with 90% of the vote. Clearly, the Catalans feel very strongly about their independence and we should assume that their leader would echo that strength. On the other hand, the Spanish government wants to diffuse the situation simply by not accepting the legitimacy of the referendum. The Economy Minister Luis De Guindos said recently that he hoped “common sense” would prevail.

What does this mean for the Euro in the medium term? Such developments can certainly not be considered as being good for Europe. The Euro has actually been very resilient in the past couple of weeks, which may reflect the market’s disbelief that anything major will materialize. It’s not pricing in a Catalan independence, that’s for sure.

In the event of a Catalan compromise, the Euro will probably see short-term strength; however such precedents will probably only weaken Europe’s unity and future growth potential. Conversely, if the Catalan leader proclaims independence it could be the trigger for a prolonged spell of Euro weakness as uncertainty will reach new highs.

When you take the actual macro view of what is happening in Catalonia, you have to ask yourself “how can this be good for the EUR and for Europe?” I’m not sure of the ‘whys’ but the EURUSD has technically held a key support level. The EURUSD has also firmed up the last few sessions following the US Non-Farm Payrolls where the USD should have gone higher, and the EURUSD lower. But instead, we held the key Fibonacci support at 1.1700 (approximate) and have bolted higher. The daily RSI has worked off overbought conditions and the RSI has based and may be poised to rejoin the uptrend.

This does pose a bigger problem for the pair, especially if you are bearish. Shallow retracements or bounces in a move usually lead to fairly explosive continuations. So, a move above the 1.2100 level could mean further EUR strength or more USD weakness. So, perhaps with everything happening in the US (rates, global tensions, political turmoil) the EUR may be the least dirty shirt in the hamper.

Going to a 4h chart we can see that the EURUSD has broken a descending wedge (typically a reversal pattern) and is now pushing again towards the H&S neckline at 1.1850 – 1.1860. If the Catalonian leader does not escalate the situation to an extreme, we can expect push above that level which would signal the resumption of the uptrend.

From a technical perspective, the USDCHF is also reversing from a mirror pattern (ascending wedge) but we have to stress here that an EUR positive development from the Catalonia front should help the CHF weaken which means that EURUSD should react more to the upside than the USDCHF to the downside in such a case.

Speaking of the EURCHF we can see that after a correction lower that got triggered from the North Korean jitters it found support at the confluence of the broken triangle’s T/L’s and is once again pushing towards the highs. From a technical perspective, there is no real resistance until the 1.20 major level (for years the SNB’s imposed floor).