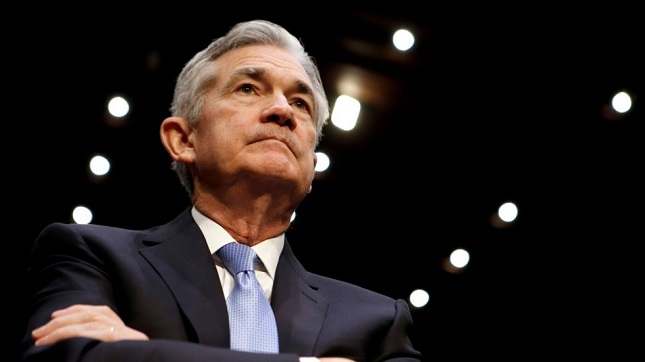 Fed Chair Jerome Powell sounded dovish during his press conference on December 16, where he gave a market update after the Fed’s monetary policy meeting. The Fed will remain accommodative for a long time, which should support gold prices.

Last week was full of important events. First, both the Pfizer/BioNTech and Moderna vaccines received emergency-use authorization from the U.S. Food and Drug Administration . In consequence, the first COVID-19 vaccination in the United States has already taken place, which is great news for America, as it marks the beginning of the end of the pandemic .

It’s high time for that! As the chart below shows, the U.S. has already lost about 314,000 people to the coronavirus. 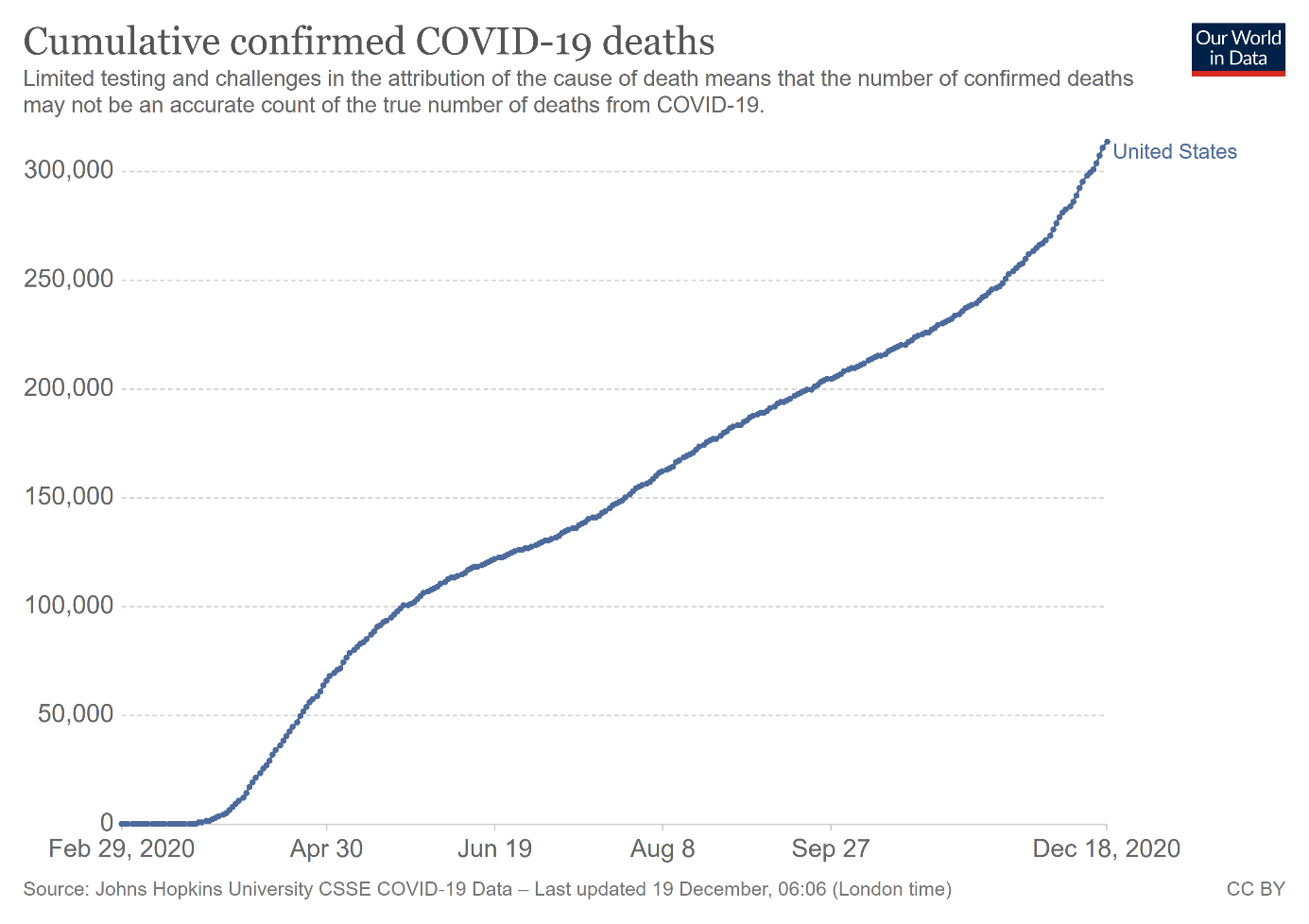 And what is disturbing, the current wave of infections doesn’t look like it’s going to end quickly. As one can see in the chart below, the number of new daily official cases is still above 200,000 – actually, it has recently jumped to about 250,000. 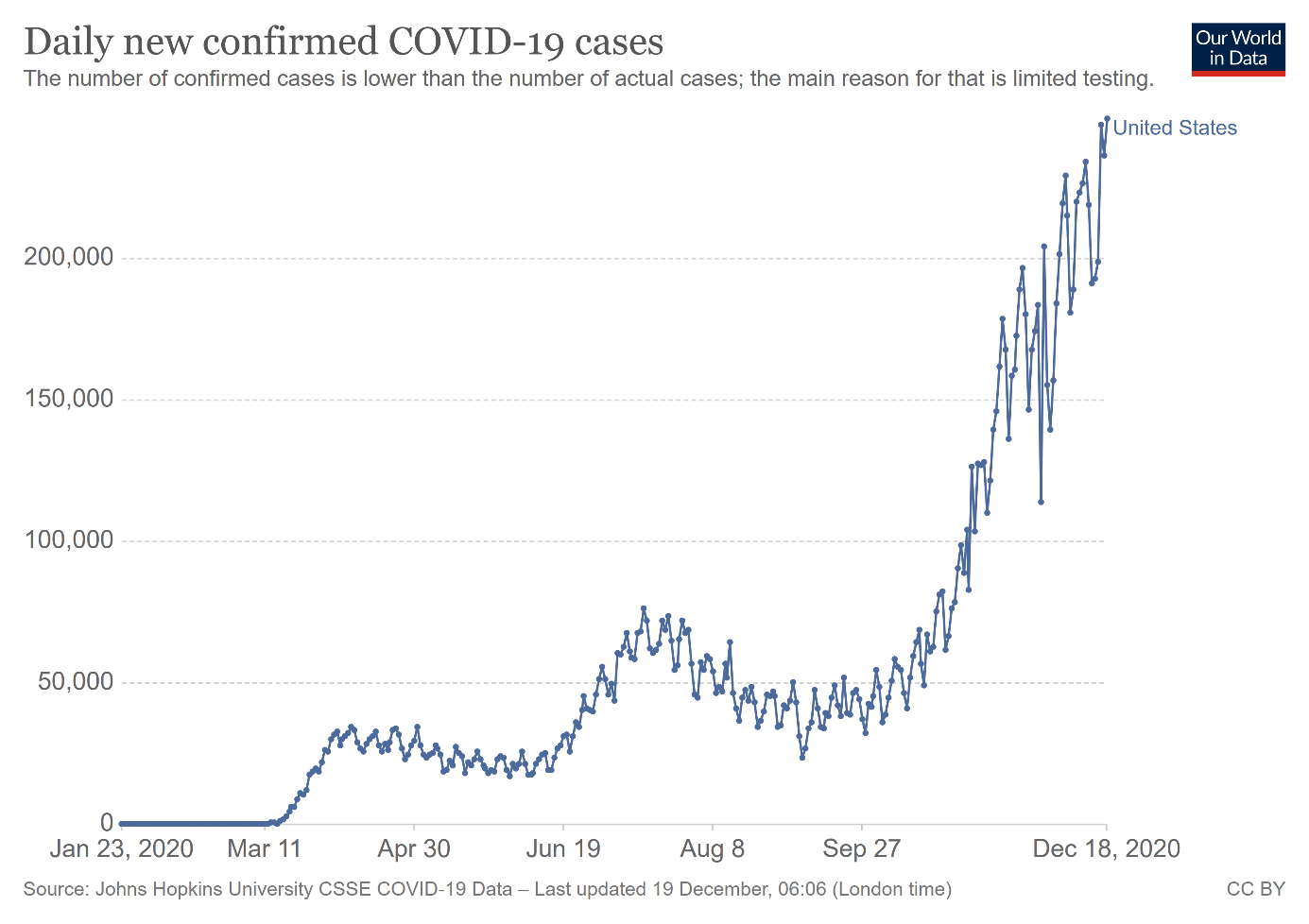 So, the beginning of vaccine distribution is the light at the end of the pandemic tunnel that brings hope for a return to normalcy in 2021. It’s important to note that, contrary to the groundbreaking November news about the efficacy of the vaccines, the approval of vaccines and first injections didn’t plunge gold prices. This suggests that the bridge to normalcy built by the vaccines has already been priced in. That’s good news for the gold bulls .

Second, there was renewed optimism about the fresh fiscal support . Indeed, there are higher odds now than at least about $750 billion in aid will be passed and implemented by the end of 2020. Theoretically, the fiscal stimulus is considered to be helpful for the economy, so it should be negative for gold, however, the price of the yellow metal may actually go up amid concerns about rising fiscal deficits , public debt , and inflation .

Third, the last FOMC meeting took place this year. I’ve already analyzed it in last Thursday’s (Dec. 17) edition of the Fundamental Gold Report , but then I focused on the monetary policy statement and the fresh dot-plot . As a reminder, the Fed tied tapering in its quantitative easing to the progress toward reaching full employment and inflation at two percent, while the economic projections were more optimistic, but they nevertheless didn’t see any interest rate hikes until the end of 2023.

However, it was Powell’s press conference that was really crucial, so let’s take a closer look at it. The Fed Chair sounded dovish, as he emphasized the U.S. central bank’s commitment to maintaining its very accommodative stance. In particular, Powell reiterated that the Fed will not hike interest rates or reduce its asset purchase program anytime soon. Actually, Powell said that the bank will normalize its monetary policy only after reaching the maximum employment and price stability:

“our guidance for both interest rates and asset purchases will keep monetary policy accommodative until our maximum employment and price stability goals are achieved. And that’s a powerful message. So substantial further progress means what it says. It means we’ll be looking for employment to be substantially closer to assessments of its maximum level, and inflation to be substantially closer to our 2 percent longer run goal, before we start making adjustments to our purchases.”

In other words, Powell clearly stated that he will keep his foot on the gas until at least 2023, and that he won’t pull the brakes even if inflation increases. This is because Powell believes that although inflation may rebound in 2021, it will be a temporary increase, and the Fed now has a flexible average inflation targeting framework, so it wants inflation to overshoot the target:

“What we’re saying is we’re going to keep policy highly accommodative until the expansion is well down the tracks. And we’re not going to preemptively raise rates until we see inflation actually reaching 2 percent and being on track to exceed 2 percent. That’s a very strong commitment. And we think that’s the right place to be”

This means that in 2021 the Fed is likely to be behind the curve. Higher inflation with the nominal interest rates unchanged imply lower real interest rates – further declines in these rates should push the gold prices up . Moreover, Powell will announce in advance when he wants to take his foot off the gas pedal and start reducing the amount of monetary accommodation. The Fed clearly doesn’t want the replay of the 2013 taper tantrum :

“And when we see ourselves on a path to achieve that goal, then we will say so undoubtedly well in advance of any time when we would actually consider gradually tapering the pace of purchases.”

What does it all mean for gold prices? Well, although the Fed did not expand its monetary accommodation in December, Powell was really dovish and he pointed out that the U.S. central bank would continue its current easy stance “as long as it takes until the job is well and truly done.” Gold welcomed Powell’s remarks and gained nearly $40 on Thursday, as the chart below shows. 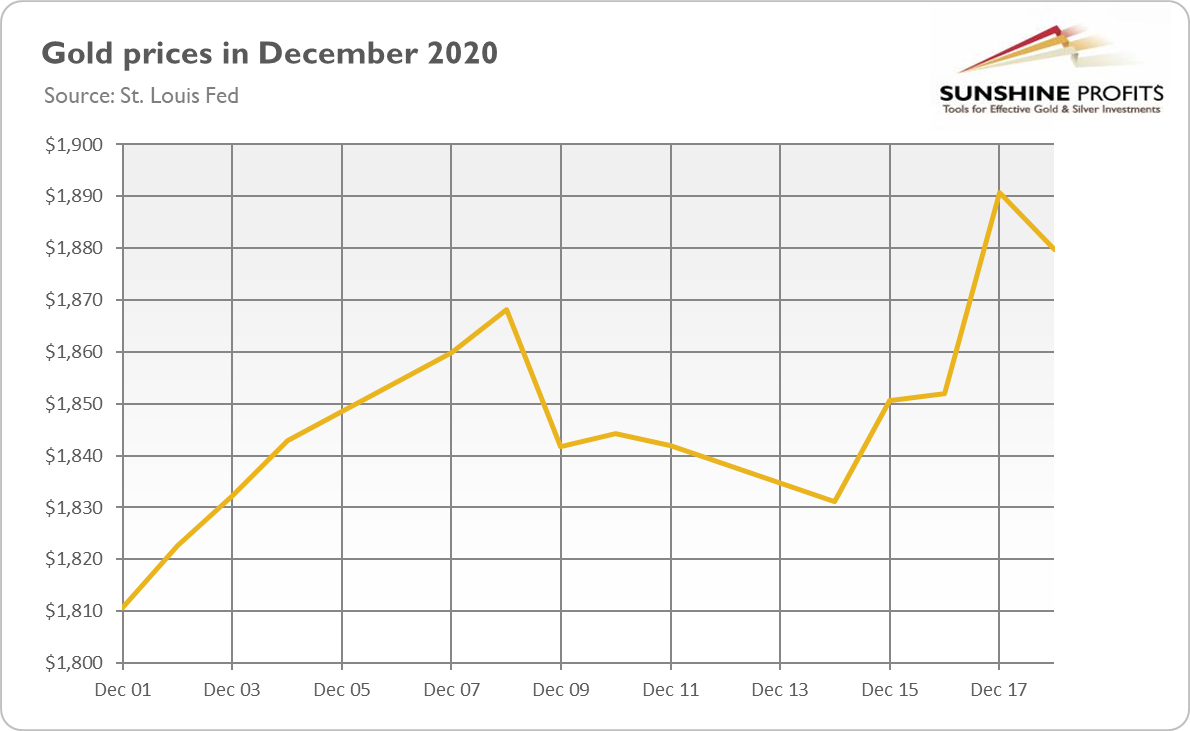 It makes sense – after all, the Fed promised that its monetary policy would remain highly accommodative for a long time. So, although the potential for further accommodation and, thus, a great rally in gold prices is limited (at least until we see a further weakening in the US dollar or an increases in inflation and decrease in the real interest rates), the risk of a sudden tightening in the Fed’s monetary policy , that could plunge the gold prices, has diminished. Therefore, gold could shine again – at least until the markets start to worry about the normalization of monetary policy and start to forecast increases in the interest rates.