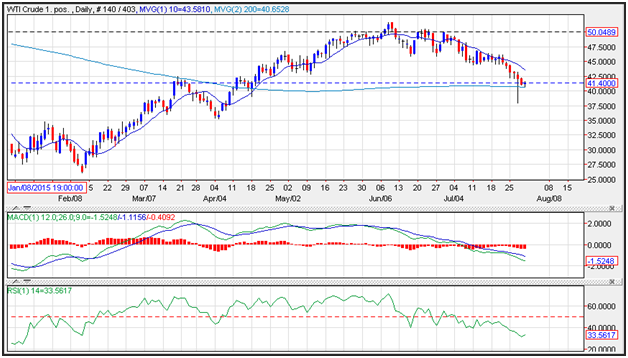 WTI Crude oil prices moved lower reaching a low of 40.58, before bouncing as support near the 200-day moving average at 40.63 appears to have held.  Prices felt downward pressure following the Baker Hughes rig count which showed an increase of 3 active drilling rigs in the latest week. The count rose last week by 14. It has moved higher since mid-May, as higher oil prices has brought producers back into the fold. Brent crude was also under pressure, but seemed to find support.
[wibbitz]b07a62c9419ce479a89ca56ea2634e03f[/wibbitz]
Resistance is seen near the 10-day moving average at 43.58.  The RSI appears to have help support near the 33, level just above the oversold trigger level of 30.  Momentum on crude oil is negative as the MACD (moving average convergence divergence) index prints in the red with a downward sloping trajectory which points to lower prices.