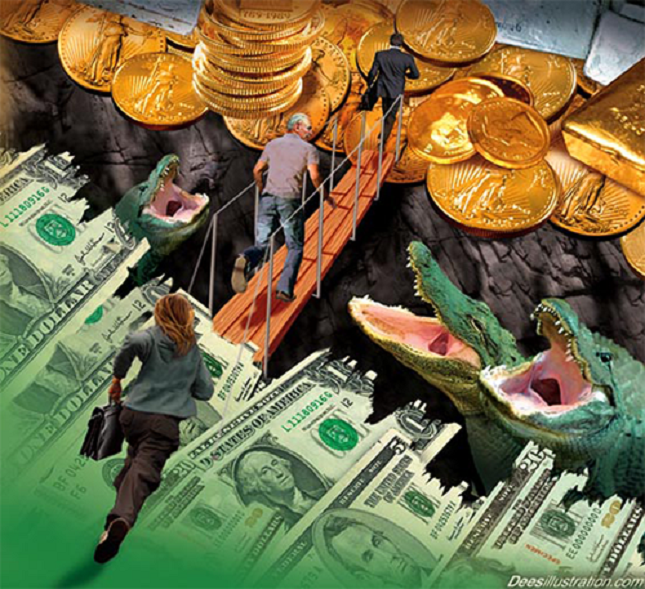 Comex gold futures closed lower last week but for the most part, it was rangebound while the rest of the investing community was busy adjusting their positions in currencies and interest-bearing instruments. Nonetheless, it was an interesting week, highlighted by a trading error, a plunging U.S. Dollar that garnered almost not reaction from traders and rising global interest rates that kept a lid on any rallies.

For the most part, the so-called “flash crash” on Monday seemed to set the tone for the week. The falling dollar and rising rates caused confusion among investors and traders even seemed to pack it in early ahead of this week’s U.S. holiday on Tuesday.

Gold’s range for the week was made in one day when it was reported that a fat-fingered clerk entered the wrong size into the computer, dropping the futures contract double-digits in only a minute.

According to reports, gold trading jumped to 1.8 million ounces of gold in just a minute, an amount that’s bigger than the gold reserves in Finland.

The very next day after the 1-minute “gold crash”, the U.S. Dollar plunged to levels not seen since last November after European Central Bank President Mario Draghi hinted at possibly withdrawing stimulus and raising interest rates. Although the ECB denied the next day that this was not his intention.

Nonetheless, Draghi’s comments opened the door to additional hawkish comments from other central banks including the Bank of England and the Bank of Canada. The news caused interest rates to rise in the Europe, the U.K. and Canada.

Surprisingly higher interest rates helped the Euro, British Pound and Canadian Dollar jump against the U.S. Dollar. However, gold did not rally. This is because U.S. Treasury yields also rose.

Gold trader found themselves in an unusual position where the dollar was plunging and U.S. rates were rising. Typically, dollar-denominated gold rallies when the dollar weakens because they usually leads to increased demand for foreign investors.

Last week, foreign investors apparently chased the yield instead of gold. This is probably because gold doesn’t pay a dividend or interest to hold it.

Last week’s price action highlights one of the major problems with gold this year:  the lack of volatility. Several times this year, gold speculators had a chance to take prices substantially higher with event-driven rallies, but each time, the rallies failed.

There are still a host of issues that could move gold higher like the Brexit negotiations, issues with the Trump administration, cyber-attacks and the tensions between the U.S. and North Korea. However, last week’s price action suggests that gold is going to have a hard time rallying in reaction to any of these events if global interest rates continue to rise.