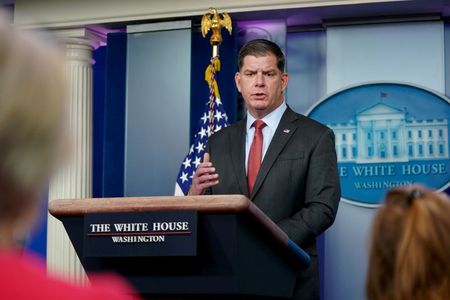 The Labor Department and its Occupational Safety and Health Administration agency announced 59 citations and the fines against Foundation Food Group, which runs the Gainesville plant, along with two other associated companies: Messer LLC – a nitrogen gas company, and FS Group Inc, a food processing equipment maker.

“Make no mistake, this was an entirely preventable tragedy,” Labor Secretary Marty Walsh told reporters in an Atlanta news conference on Friday.

OSHA’s investigation found that the companies failed to implement needed safety protocols to prevent the leak, the workers were not taught about the dangers of nitrogen, and they lacked the training and equipment to save lives.

Officials with Foundation Food Group, which also runs three other plants in north Georgia, did not immediately respond to inquiries from Reuters seeking comment on Saturday.

The company posted on its website, “As our community continues to heal, we extend our continued sympathies and prayers to the families and friends of those lost.”

Messer said it was reviewing the citations.

The accident occurred on Jan. 28 when a freezer using nitrogen as a coolant failed, Labor Department officials said at the news conference.

Supercooled nitrogen was used at the plant to quick-freeze chicken patties, tenders and individual cuts which were sold to restaurants and food service operations.

Several employees were trying to troubleshoot the leaking freezer and were overcome by the gas as were others when the gas spread, officials said.

Nitrogen, typically an inert gas that becomes a liquid when supercooled, is widely used in frozen-food processing plants. However, liquid nitrogen gas released in a confined space can rapidly displace oxygen in the air and lungs, leading to unconsciousness and lethal asphyxiation.

News accounts at the time reported some of the dead and injured also suffered severe freeze burns.

In December, two workers at a Golden West Group plant in Southern California lost consciousness and died following an apparent nitrogen leak there, according to the Los Angeles County Fire Department.