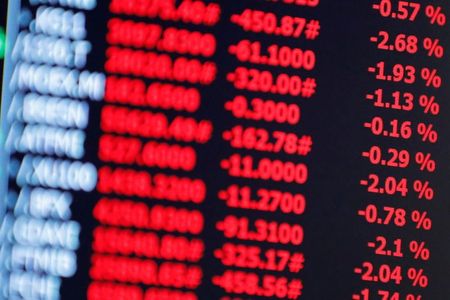 A raft of indicators from consumer surveys to derivatives suggest that without fresh catalysts markets could be in for a pause or even a reversal over the autumn months. Speculators have also been piling into the dollar, with positioning at its highest in a year.

“Although equity headline indices keep registering new highs, there has been a clear rotation to defensive plays,” said Vasileios Gkionakis, Global Head of FX Strategy at Lombard Odier in Switzerland.

Defensives, which are less vulnerable to swings in the global economic cycle, have outperformed their cyclical rivals of late, he noted. Similarly, high-growth sectors including tech that boomed during lockdowns are doing well again.

1/ IS THE CONSUMER RIGHT?

The gap between how U.S. consumers are feeling and what Wall Street expects is at its widest in at least 13 years.

Analysts expect profit growth at S&P 500 companies to continue at double-digit rates well into the first half of 2023, Refinitiv data indicates.

The person on the street is less optimistic. U.S. consumer sentiment has collapsed to a decade-low, according to the closely watched University of Michigan index.

That implies sizeable downward moves in earnings in the months ahead.

Recent data indicates that the bulk of the reopening economic boost is past. But fears are also growing of a fourth COVID-19 wave, showing up on Wednesday in Germany’s IFO survey, with steep declines in business morale and expectations.

Citi’s global economic surprises index — essentially a gauge of whether data is beating or undershooting forecasts — turned negative this week for the first time since June 2020.

Early manufacturing surveys for Europe in August dropped to the lowest since January, consistent with recent softening in the United States and China.

Stock markets usually falter when U.S. PMIs from the Institute of Supply Management (ISM) peak but this has not happened this year, Citi analysts noted.

“Equity markets (outside China) have not yet seen the usual wobble associated with a PMI rollover, so could be vulnerable,” they wrote, adding that a return to the usual trend “would imply a 10-15% drop in the S&P or the market going nowhere for the next six months.”

Record-high world stocks mask one important fact — the breadth of the market has narrowed significantly, meaning gains are being driven by fewer constituents.

Broad participation in the rally indicates bulls are driving the market, but when the converse happens — with more losers than gainers — it can imply the market has peaked and further gains will be harder to come by.

Reflation bets dominated the first half of the year which meant selling gold and other safe-haven assets and piling into shares such as travel, banking and so-called value stocks that benefit as the economy improves.

But gold prices have bounced 7% in the past two weeks, after losing 12% since May. Materials, emerging markets, value stocks have all come under pressure in recent weeks.

Despite the Delta worries, investors remain heavily positioned towards more stock market upside — the U.S. S&P 500’s index measuring the “put-call” ratio on stocks is near its lowest levels this year.

Essentially it implies more participants expect the market to rise than to fall.

But retail punters who grabbed headlines in early-2021 with bets on a series of unloved stocks, appear less keen. The AAII survey, which measures individual investors’ sentiment, is in bearish territory for the first time since October 2020.