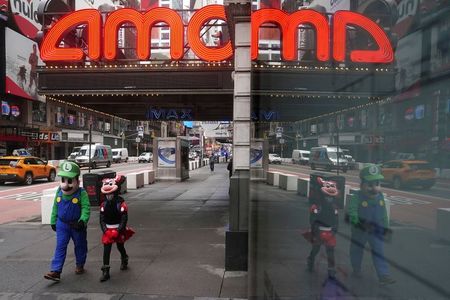 By Aaron Saldanha and Devik Jain

Mudrick Capital Management bought 8.5 million new AMC shares for $230 million on Tuesday before later selling them at a profit, according to a source, a bold move by the fund and the company to cash in on the retail-driven surge in its stock.

Other institutional traders continued to pour scorn on rises in so-called “meme stocks”, which also include GameStop Corp and BlackBerry Ltd, but shares in all three continued to gain in trading before the bell.

“It’s not rational, but do not bet against it,” said a Berlin-based trader.

AMC has been among the biggest gainers from a vigorous market battle since January involving both hedge funds and a new generation of social media centric small-time traders.

On Wednesday, the company launched a new scheme that offered even the smallest investor a free large popcorn if they signed up to a regular newsletter.

“Even if our shareholders now number in the millions … these people are the owners of AMC, and I work for them,” Chief Executive Officer Adam Aron said.

AMC’s stock has surged more than 1,400% this year and, at nearly $40, is trading at more than 10 times the median analyst price target.

The number of messages related to AMC on trading-focused social media site Stocktwits rose more than 7% on Wednesday, with most of them reflecting a positive sentiment.

Daily trading volumes in AMC have reached their highest since January in the past week, according to Refinitiv Eikon, while data from Fidelity showed it was the platform’s most traded share.

GameStop was up 1% in premarket trading, while Koss Corp jumped 7%. BlackBerry’s U.S.-listed shares were last up 17%, bringing their total yearly gains to more than 75%.