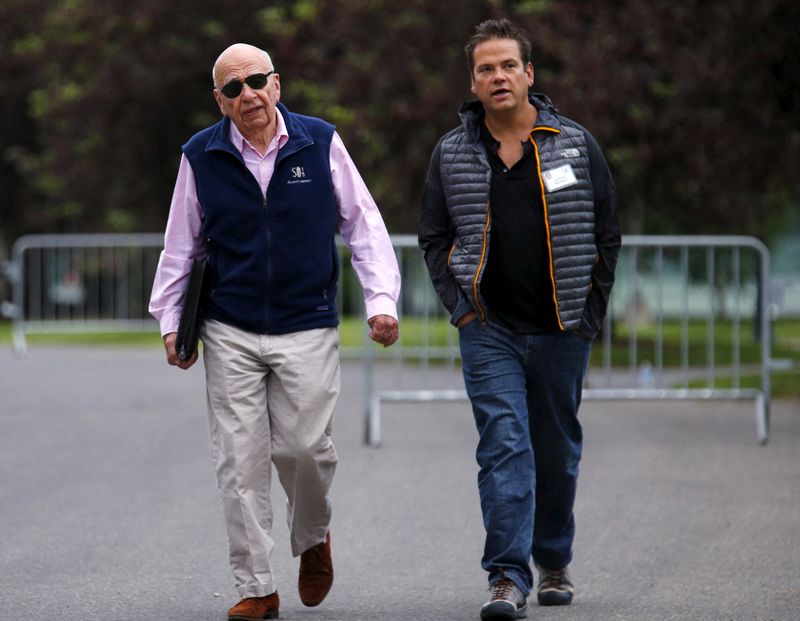 By Helen Coster and Jan Wolfe

(Reuters) – Did Rupert and Lachlan Murdoch influence Fox News’ coverage of claims about two voting technology companies — knowing that those claims were false?

That has become a significant question in defamation lawsuits filed by Smartmatic and Dominion Voting Systems Corp against Fox News and its parent company Fox Corp. The plaintiffs are asking for more than $4 billion in damages from the media giant, on-air talent such as Maria Bartiromo and guests including Rudy Giuliani and Sidney Powell, lawyers aligned with former U.S. President Donald Trump.

Smartmatic and Dominion are seeking communications from Fox Corp Chairman Rupert Murdoch and his son Lachlan, the company’s executive chairman and chief executive, to help prove that Fox News either knew statements it aired were false, or acted with reckless disregard for whether they were true or false.

That is the standard of “actual malice,” which public figures must prove in order to prevail in defamation cases.

It is just one component of Dominion and Smartmatic’s efforts to show that Fox News, hosts and guests either knew or should have known they were amplifying bogus claims. The voting firms have also alleged that individuals who made the claims on-air knew they were false or recklessly ignored easily available evidence that they were false.

Fox News has moved to dismiss the lawsuits, saying it reported on matters of paramount public concern, and that this coverage is protected by the First Amendment of the U.S. Constitution.

Bartiromo, Powell and Giuliani, like other defendants, have argued in court filings that they engaged in free speech protected by the First Amendment of the U.S. Constitution.

In the aftermath of the 2020 presidential election, Trump allies like Giuliani, a Republican, appeared on Fox News and falsely claimed Dominion and Smartmatic software may have manipulated vote counts in favor of Democratic opponent Joe Biden.

Other Fox News coverage after the election refuted those claims, as did two Murdoch-controlled newspapers — the Wall Street Journal and the New York Post.

According to Dominion and Smartmatic, that Wall Street Journal and New York Post coverage is evidence that Fox News was amplifying election conspiracy theories its leaders knew, or should have known, were false.

“It demonstrates the availability of accurate information that the defendants chose to ignore,” said Erik Connolly, a lawyer for Smartmatic, in an interview. “It wasn’t that hard for them to figure out that what they were saying was inaccurate.”

In a Nov. 8 court filing, Dominion alleged that the Murdochs “intentionally disregarded the facts in their own newspaper and did nothing to stop Fox’s dissemination of lies about Dominion.”

Legal experts say that there does not appear to be precedent for Dominion and Smartmatic’s strategy of showing actual malice in part by seeking communication from top executives, and that their efforts to hold guests and hosts accountable is a more traditional strategy.

In legal filings and court hearings, Fox News has asserted that actual malice hinges on the state of mind of the individuals who made the claims about the election. In its motion to dismiss Dominion’s lawsuit, Fox News lawyers cited a 2013 case from the U.S. Court of Appeals for the Second Circuit. In that case, the court ruled that when there are multiple people involved in an organization’s publication of an allegedly defamatory statement, the plaintiff must prove that the person responsible for publishing that statement acted with actual malice.

Lyrissa Lidsky, a media law scholar and the dean of the University of Missouri School of Law, said the plaintiffs’ strategy of seeking the Murdochs’ communication is unusual because the owner of a newspaper, for example, does not typically make the day-to-day decisions about what to publish and therefore would not know if a statement was false or was made with reckless disregard for its falsity.

If the cases survive the motions to dismiss, as four legal experts have said is likely, Dominion and Smartmatic would then start seeking emails and other communications and testimony.

Dominion said in a September court filing that it has requested internal Fox News documents, including emails, text messages, and notes exchanged between employees who produced segments about Dominion. An unnamed Fox representative testified on Dec. 8 about the company’s internal communications systems.

It is possible that Fox executives may have put in writing communication that could be used against them in these cases, says William & Mary Law School professor Timothy Zick.

“This strikes me as relevant evidence — something the plaintiffs will likely be entitled to,” Zick said.