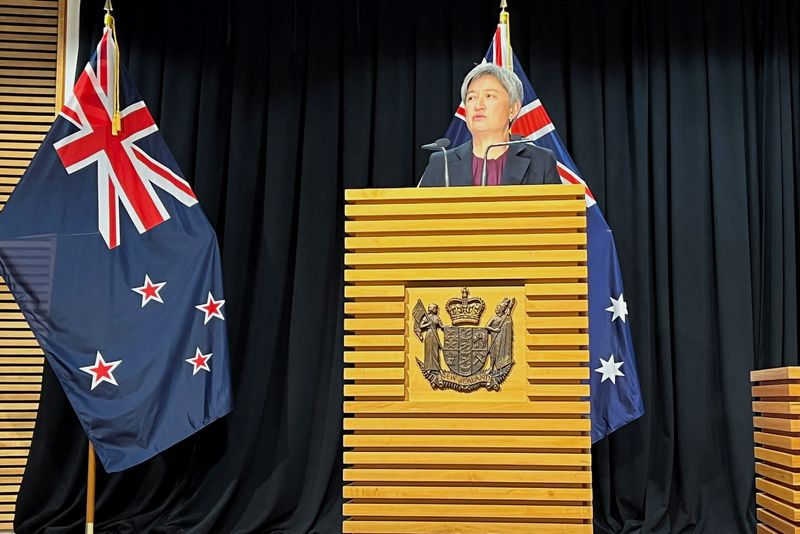 SYDNEY (Reuters) -Australian Foreign Minister Penny Wong visited a riot-hit community in the Solomon Islands on Friday to highlight the capabilities of Australian police, amid regional concern over the Pacific nation’s security pact with China.

Wong held “constructive” talks with Prime Minister Manasseh Sogavare, she said, during the first visit to Honiara by an official of Australia’s new government.

Her visit spotlighted education and health aid and the efforts of Australian police to restore stability by working with disadvantaged youth following deadly riots in November.

Wong told reporters Sogavare had repeated his public assurances “there will not be a military base nor a persistent foreign military presence here in the Solomon Islands” under the China pact.

Australia, Japan, New Zealand and the United States have expressed concern that Beijing could establish a military presence in the Pacific. The pact will be discussed at next month’s Pacific Islands Forum leaders meeting in Suva because it has regional implications, several island nations have said.

“Australia’s view does remain that the Pacific family should be responsible for our security,” Wong said on Friday.

Wong visited the Burns Creek settlement east of the capital where buildings were burnt down in November’s rioting. Police from Australia, Fiji and New Zealand and young people from the Solomons have built a clinic there in a reconstruction effort.

“Your choice to visit Burns Creek community gives hope to our youth and our community members that they are still important,” Guadalcanal Premier Francis Sade told Wong.

The area, with a long history of unrest, has been associated with high youth unemployment, and Wong said she spoke to a youth representative about the potential for Solomon Island citizens to work in Australia under a new visa program.

China says the riots, which also destroyed buildings in Honiara’s Chinatown, are the reason for its security pact, which lets its police protect Chinese projects in any future unrest. Sogavare has previously said the pact will focus on policing.

Wong visited a school to announce Australia would donate 200,000 doses of COVID-19 vaccine for children younger than 11, to help schools reopen from five months of pandemic closures.