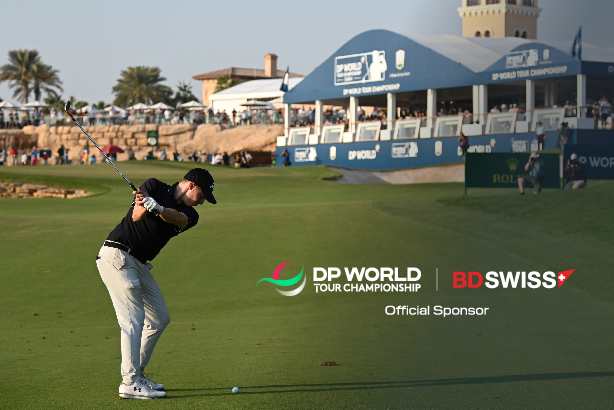 One of the world’s top sporting destinations for golf fans and aficionados, Dubai has been home to the DP World Tour Championship since 2009, and the event has produced some of golf’s most memorable moments through the years. The tournament is preceded by the AVIV Dubai Championship which will be played on the Fire course at Jumeirah Golf Estates from November 11-14, a week before the campaign reaches its traditional climax at the DP World Tour Championship.

The two showpiece tournaments are part of the Rolex Series event which will bring the curtain down on this year’s Race to Dubai, a season-long competition to crown the European Tour’s number one player.

Partnering for the very first time, BDSwiss and European Tour are two organisations committed to technical expertise with a passion for performance; while at its highest level, the game of golf instils in its players the same type of values that BDSwiss seeks to inspire in its traders: dedication, resilience, and commitment to excellence. As part of this sponsorship, BDSwiss will also be launching an exclusive loyalty campaign rewarding its loyal clients and partners as well as top-performing traders with Hospitality tickets, round trip flights and accommodation to Dubai.

Speaking about the new partnership BDSwiss CEO Alexander Oelfke commented: “At BDSwiss, we are immensely proud to collaborate with the European Tour in sponsoring the DP World Tour Championship — a prestigious golf event that supports our global brand image and resonates with our core values of integrity, perseverance, and commitment to world-class performance.”

Daniel Takieddine, BDSwiss Senior Executive Officer MENA, added: “We’re delighted to be one of the official sponsors of Golf’s DP World Tour Championship, a globally acknowledged sporting event that will not only support our brand with international exposure but will also bolster our efforts to become a leading multi-asset trading powerhouse in the UAE and across the broader MENA region.”

Max Hamilton, Commercial Director of the European Tour, also commented: “We’re delighted to welcome BDSwiss to our network of partners for the DP World Tour Championship. The tournament is not only an annual milestone in global golf but a highlight of the sporting calendar in the Middle East which will be broadcast to a global audience. We’ll be working closely with BDSwiss to make sure that the partnership will deliver significant brand and business opportunities.”

Highlighting the group’s commitment to communicate its brand values through top-tier sporting events and organisations, this is the second global sporting tournament BDSwiss is sponsoring in 2021. Earlier this year, BDSwiss announced a two-year deal as the gold sponsor of the DP World Tour Championship Stuttgart tennis tournament.

BDSwiss is a leading financial services group, offering bespoke CFD trading and investment products to more than 1.5 million registered clients, in over 180 different countries. Since its inception back in 2012, BDSwiss has been providing top-class products, a wide range of platforms, competitive pricing and fast execution on more than 1000+ underlying instruments including Forex, Shares, Commodities, Indices, and ETFs. BDSwiss complies with a strict regulatory framework and operates its services on a global scale under a number of different entities.