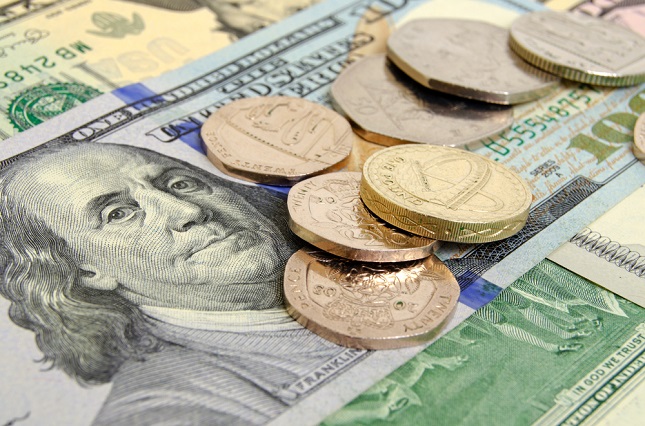 The RBA has continued to raise concerns over soft wage growth and the likely impact on consumer spending and the effects on the economy. High household debt and soft wage growth is certainly a bad combination, the only silver lining being the soft outlook on inflation.

It’s not just the economic data that’s hurting the Aussie Dollar today, with the risk off sentiment also weighing. The Asian markets continued to see red this morning, with commodities also in decline.

The ASX200 slipped 0.58% on the day, while the Nikkei ended the day down 1.57%. While both were hit by falling commodity prices, the Nikkei was also hit by the weaker Dollar. There was little support from Japan’s 3rd quarter GDP numbers released this morning. Japan’s economy slowed in the 3rd quarter, though growth was better than forecasted year-on-year. The economy grew by 1.4%, which was better than a forecasted 1.3%, whilst significantly softer than the 2nd quarter’s upwardly revised 2.6%.

While inflation continues to be the Bank of Japan’s bugbear, Abenomics seems to be working. Japan’s economy has enjoyed its 7th quarter of growth, driven by exports. The next area of focus for Prime Minister Abe will be to drive wage growth that will be needed to support consumer spending. Soft consumer spending continues to peg back growth and weighed on the 3rd quarter GDP numbers. Consumer spending accounts for more than 50% of GDP, leaving the economy heavily reliant on global demand at present.

Following the big moves by the EUR on Tuesday, coming off the back of solid economic growth figures out of Germany, the only major data out of the Eurozone this morning is France’s finalized October inflation figures, which are unlikely to have a material impact on day. European equities felt the full force of the bounce in the EUR on Tuesday. ECB President Draghi didn’t come to the rescue and the EUR’s looking to push to $1.18 levels, though any major moves north through the day will be dependent upon how the Dollar performs.

Across La Manche, it’s another big day for the Pound. Economic data out of the UK this morning includes October’s earnings figures and September’s claimant count change. While inflation remains the BoE’s key consideration, stability in the labour market is also a major factor, with a negative outlook on employment having held the BoE back from any moves earlier in the year. Consumer spending has been plagued by wage growth lagging inflation. The UK’s inflation figures released on Tuesday suggests that inflation may now have peaked, which is good news, but forecasts are for wage growth to soft and that would be the bad news. Weak numbers today will certainly weigh on the Pound, particularly as the markets see the BoE standing pat on monetary policy until late into next year.

At the time of writing, the Pound was down 0.12% at $1.3149, with any weak numbers likely to see the Pound drop back to $1.30 levels. The political environment is a negative and that suggests that the outlook for Britain’s departure from the EU will also be a negative. The UK Prime Minister’s falling support is leaving the government on a weaker footing at the negotiating table. Outside of the data and the rising concerns over Theresa May’s position at the top, BoE Monetary Policy Committee members Haldane and Broadbent are also scheduled to speak after the release of the labour market numbers. Any talk on monetary policy will be influence.

Across the Pond, the Dollar will also be under the microscope this afternoon. Stats out of the U.S include October’s retail sales and inflation numbers, with September’s business inventories and November’s New York Empire State Manufacturing Index figures also scheduled for release.

Focus will be on the inflation and retail sales figures. Soft inflation numbers could influence the market’s outlook towards December’s monetary policy decision and the rate path for next year, while there will need to be strong consumer spending to support 4th quarter growth in the U.S and maintain the upbeat sentiment towards the U.S economy. On Monday, FOMC voting member Harker had talked of 3 rate hikes next year, providing support for the Dollar. If inflation continues to lag, the doves will more than likely temper any hawkish rate projections for next year.

While focus will be on the stats, the markets will need to keep an eye on Capitol Hill. Noise on the tax reform bill will likely be the key driver through the day, despite the relevance of the data due out of the U.S this afternoon.

At the time of writing, the Dollar Spot Index was down 0.01% at 93.813, with direction on the day hinged on the Republicans and this afternoon’s data.