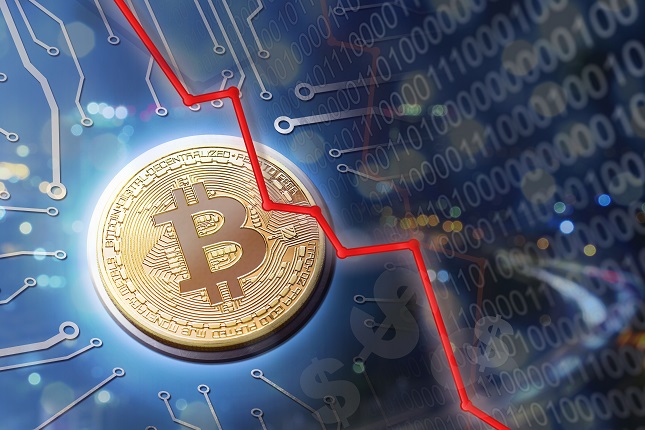 Bitcoin managed to shake off some of the cobwebs on Saturday, rising by 1.61% to end the day at $6,950, the gains coming as its closest rivals languished in the red for the day, or very close to it.

The uptick may not have reversed the bearish trend formed back on 21st March, but brings some much needed respite, with Saturday’s rise leaving Bitcoin down 17.8% from Monday’s open through to Saturday’s day end. For the quarter and for those who jumped into Bitcoin on the back of the December rally, Bitcoin was down 63% for the 1st quarter.

Some may look to call it a correction, while others may consider it to be a bubble gone wrong. Either way, a full recovery is going to take some time, as investors look on to get a sense of what regulations will be rolled out in the coming months, China’s PBoC having suggested that they would likely follow the global regulations.

With a lack of particularly negative news hitting the wires, Bitcoin managed to move through to an intraday high $7,087.8 in the middle of the day, falling short of the day’s first major resistance level of $7,255.23, whilst coming to within touching distance of the day’s 23.6% FIB Retracement Level of $7,173, which ultimately led to a pull back to sub-$7,000 levels by the day’s end.

An intraday low $6,794.26 held well above the day’s first major support level of $6,502.88, Bitcoin finding adequate support at and around the $7,000 psychological level to avoid a more severe slide during the day.

It was the 2nd consecutive day that Bitcoin closed at sub$-7,000 and only the 2nd time since the February sell-off that saw Bitcoin touch a post-December rally low $5,920.72.

For the Bitcoin bulls, the takeaway from the latest sell-down will be the fact that Bitcoin hasn’t fallen to a new post-December rally low, in spite of the latest bearish trend continuing since 21st March’s swing hi $9,188.1.

The bulls will consider current price levels as attractive and the optimists will suggest that the eventual rollout of a global regulations will be a positive for the market. The jury is out on that one, particularly when considering the fact that disclosure requirements will likely lead to a pull out of the market by many. One thing to consider will be regulatory arbitrage however. As with every asset class and regulation, there are jurisdictions that are more malleable and accommodating than others…

For Bitcoin to reverse the bearish trend formed back on 21st March, a move through the day’s 38.2% FIB Retracement Level of $7,558 would be needed to support a run at $8,000 levels. Current market sentiment suggests that such a move is unlikely at best, with even the day’s 23.6% FIB Retracement Level a tall order as investors continue to hit the sell button well before key resistance level are reached.

Looking at the moves through Friday and the weekend, one could argue that Bitcoin has bottomed out, but with all of the regulatory implementations to come, stemming from the anticipated roll of global regulations by the end of July, what has the markets in a panic is not going to disappear any time soon.

Investors will need to simply accept the fact that regulations are on the way and, while I would even go so far as to say that the broader market has, the issue that remains are curve balls, which could catch the markets off-guard. Investors are currently anticipating disclosure and tax laws and not an all-out war against the cryptomarket that has been looking to dislodge central bank control on the monetary system.