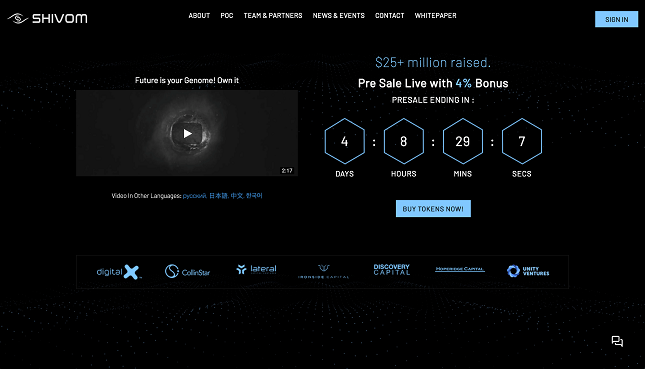 Shivom, an international blockchain-powered startup that aims to create the world’s biggest data hub on genomic information using decentralized technologies to secure the data and put it to a good use via various apps, has announced in its blog post that it has garnered support from government officials from three different countries.

Shivom will use blockchain tech in order to fully secure genomic data and ensure utter privacy. In particular, it uses blockchain to store encrypted data to make it available only to the designated users while cutting costs of transactions, which is one of the cornerstone features of decentralized ledgers. This security is thought to encourage people to share their genomic data without the fear of having it leaked. The service is expected to be available worldwide, which includes countries that currently have underdeveloped research capabilities.

“The current healthcare space is fraught with major problems such as data silos, lack of diversity, lack of interoperability, little privacy and widespread data breaches, which makes effective healthcare and precision medicine challenging,” Shivom’s co-founder and CEO Dr. Axel Schumacher said in an interview to TechBullion. “The Shivom ecosystem plans to solve the healthcare challenges by offering an open blockchain-based genomics database alongside a web-marketplace and innovation hub, which will allow providers and third-party vendors to add and market customized apps and precision medicine services.”

The genomic data are required to drive R&D work in such directions as the invention of a cure for cancer, Alzheimer’s and other serious and often lethal diseases that stem from irregularities in the DNA. Certain medicines have to be calibrated to match the patient’s genetic code in order to be effective.

“For the patient, understanding their genome has fundamental consequences. Once people have uploaded their genome sequence or after they got their DNA sequenced with one of our kits, they get access to various health-related apps to manage their health. Each individual can learn only what they want to learn about themselves. Sometimes, people want to know just parts of their potential future, in particular, that information that has actionable consequences. Using smart contracts on the Shivom platform, people can be guided in their learning process, and they can easily decide if they want to learn about their risk of developing certain diseases or not. Patients can also share their data to help their healthcare providers develop improved treatment strategies to manage their health outcomes and to participate in clinical trials that may ultimately develop a treatment for a disease they are at risk for developing. Thus both the consumers and the industry as a whole benefit,” Dr. Schumacher explained.

As the project’s token sale (accepted by Bitcoin or Ethereum) is drawing to a close, and a referral program proves its efficiency, Shivom has now announced that it received support from Estonia’s former prime minister Taavi Rõivas and Antanas Guoga, a Lithuanian representative in the European Parliament.

“We’re absolutely delighted to be welcoming a person of Taavi Rõivas’s experience to Shivom and believe he will play an important role in helping us to develop the world’s foremost genomic data-hub to power personalized healthcare. He was at the forefront of Estonia’s genetic biobank project that allowed citizens to control and manage their data to access personalized healthcare and this experience will be invaluable to us as the Shivom project progresses.”

The project has also partnered with the government of India’s state of Andhra Pradesh to sequence up to 60 million local people, which would kick off with a pilot study once the token sale is over. In addition, Shivom has partnered with Genetic Technologies Limited for the development of predictive genetic tests and the use of accredited laboratories.

According to the company, Shivom is headed by a team of geneticists, scientists, digital currency experts, and proficient business and blockchain developers.

This instance is the most recent occurrence of cooperation between blockchain-powered innovative startups and the government sector. Even though the technology was initially conceived as a backbone for bitcoin, which is a currency that by definition defies governments, the powers that be seem to have come onboard of innovations over the years. One of the most notable examples of blockchain’s integration in government operations is Estonia’s e-residency program which is backed by blockchain solutions developed by BitNation.

Now, with blockchain entering the forefront of international studies of the genome, and considering the support it garners from government officials all over the world, it is safe to assume that the humankind is about to enter a brave new world of decentralization.