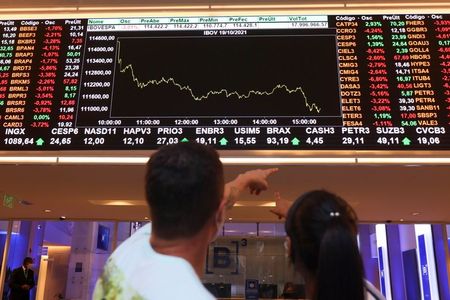 With Bolsonaro’s popularity slipping and headlines focused on a Senate inquiry calling for criminal charges based on his handling of the pandemic, the president has pushed for more government spending ahead of next year’s election.

In public remarks on Thursday he promised some 750,000 truckers relief to offset rising diesel prices, without giving details. He repeated a vow to more than double payouts from Brazil’s main welfare program in a fiscally “responsible” way, although markets shrugged off his assurances.

Brazil’s benchmark stock index plunged around 4% in Thursday trading to its lowest levels since November. The real weakened 2%, testing levels near 5.7 to the U.S. dollar for the first time since April.

Interest rate futures showed bets on even more aggressive rate increases by the central bank to contain inflation already running in double digits over the past 12 months.

JPMorgan analysts shifted their call for upcoming monetary policy meetings, forecasting the central bank will hike rates by 125 basis points next week and again in December instead of its prior outlook for continued 100-basis-point increases.

The proposal to exempt additional welfare spending from the spending cap “is already jeopardizing the credibility of the fiscal sustainability,” they wrote, adding that policymakers may turn even more aggressive with a 150-basis-point hike next week.

The JPMorgan analysts warned of fresh stimulus “backfiring” by forcing the central bank to tighten financial conditions, threatening a forecast for the economy to grow 0.9% next year.