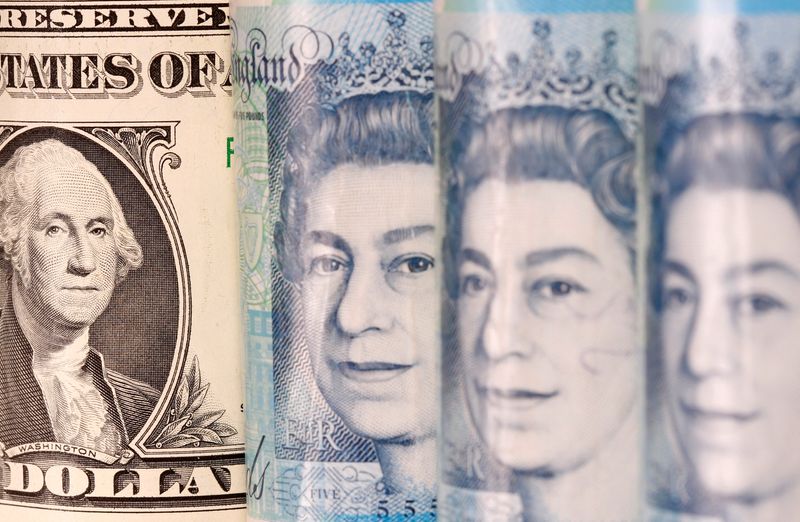 LONDON (Reuters) -Sterling climbed to a two-week high against a weaker dollar on Thursday, winning a respite for now from the soaring inflation and murky growth outlook that has weighed on sentiment towards the British currency.

Having fallen sharply on Wednesday, the pound bounced back – a move analysts attributed to a broadly-weak dollar.

It had hit the $1.25 level earlier this week before tumbling on Wednesday after data showed UK inflation rising to a 40-year record high and growing concerns this would slow growth sharply.

“The key debate we’re having, and the Bank of England is having, is to what extent should they be responding to the pick-up in inflation and to what extent the rise in inflation is putting downward pressure on future growth, so limiting the need to tighten policy,” said RBC Capital Markets chief currency strategist Adam Cole.

“We’re kind of on a bit of a knife edge at the moment over which one dominates.”

Strong labour market data earlier this week had boosted expectations that the Bank of England would have to further increase interest rates, while other data showed that inflation is now running at 9% — well above the BoE’s 2% target.

“Volatility in the pound has increased because of the signals that we have received from the Bank of England, it has a very divided committee with some arguing for larger rate hikes and some who are concerned about the economic outlook,” said Mikael Olai Milhøj, chief analyst at Danske Bank.

Potential changes to the Northern Ireland protocol and the risk of a trade war with the European Union also pose a Brexit-related risk for sterling.

“It is a risk to my forecast in the sense that if tensions start to intensify more than what we are seeing right now, it’s something that would weigh on the pound, and we could see investors pricing in a higher Brexit risk premium,” said Milhøj.

“The more critical question is what the consumer confidence and retail sales data shows tomorrow, as we get to see how consumers responded to rising prices and the squeeze on incomes that resulted from it,” said RBC Capital Markets’ Cole.