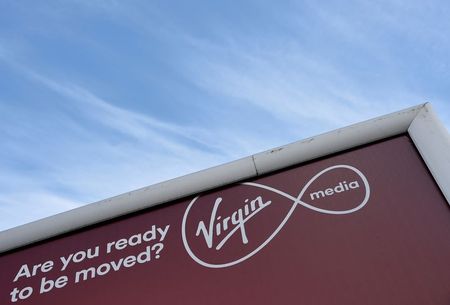 Virgin Media 02, a joint venture that brought together Liberty Global’s cable network and Telefonica’s O2 mobile network earlier this year, said there was an opportunity to enter the fixed wholesale market.

Chief Executive Lutz Schuler said Virgin Media was already Britain’s leading gigabit network – delivering speeds of 1.1 Gbps by the end of this year – and the upgrade would make it even stronger for the decades ahead.

He said the cost was about 100 pounds per premise, much lower than competing fibre build because it will use its existing infrastructure.

Total investment, not including customer migration costs, is about 1.43 billion pounds, given that 1.2 million homes are already on its fibre network.

BT has set out an ambitious plan to build fibre to 25 million premises by end-2026.

Schuler said Virgin Media was not on the back foot.

“We are the speed leader, we have been growing for five consecutive quarters,” he said in an interview on Thursday.

“Customers pay a premium for speed and customers come to us, so we are on the front foot.”

He said talks on wholesale access to its network for rival operators, such as Sky, Vodafone or Talktalk, were ongoing.

“A partner would get a speed advantage for their customers in the short term on the cable network and long term on the fibre network,” he said. “This is definitely not a bad position to negotiate from.”

Virgin Media is extending its network, adding 89,000 homes in the last quarter to take the total build in its Project Lightning plan to 2.5 million.

It has an ambition to extend to a further 7 million premises in the coming years, which Lutz said would happen once the building blocks were in place. “Stay tuned,” he said.

The company said it added 36,000 broadband subscribers in Q2, increasing its fixed-line customer base to 5.7 million.