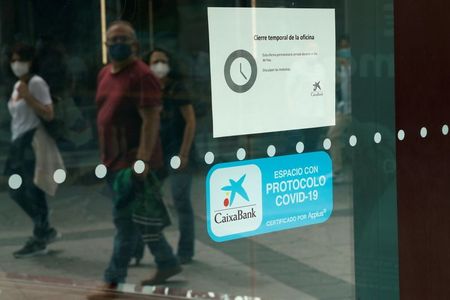 By Jesús Aguado and Cristina Galan

It was the second such labour action in Spain’s banking sector in less than three weeks after a one-day strike by BBVA employees marked the first stoppage involving a bank at a national level in 30 years.

Following its acquisition of Bankia, Caixabank said in April it was planning to cut 8,291 jobs, one of the largest such culls in Spanish history, to adapt to a client shift towards online banking.

On Tuesday, it offered to bring that number down to 6,950, while it also improved economic compensations for those who leave the bank, Caixabank said in a statement.

Spanish union Comisiones Obreras (CCOO), the largest in the financial sector, demands that any cuts should be through voluntary redundancy while calling for greater financial compensation.

A CCOO spokesperson said on Tuesday it was still too early to give an assessment of the bank’s latest offer.

Negotiations between the bank and unions are expected to end on June 29.

“If they fire me now, I won’t find another job,” said Noelia Anchuelo Berlinches, a 49-years-old Caixabank employee, protesting in front of Caixabank headquarters in Madrid.

“What we are asking now is to be treated with respect,” said Anchuelo Berlinches, who started working 30 years ago at Caja Madrid, the former savings bank that became Bankia in 2010.

According to CCOO, 70% of Caixabank’s 5,552 branches in Spain were shut by the strike on Tuesday although neither the bank nor CCOO said how many of its around 44,000 employees had taken part in the strike.