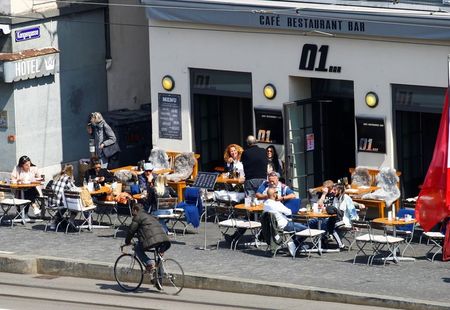 Around 43% of one-off payments in supermarkets and restaurants are made with cash, the most popular payment instrument, the survey said.

But cash has lost some of its appeal, with the figure dropping from the 70% level in the last SNB survey in 2017.

“In terms of the number of payments made, cash continues to be the payment instrument most frequently used by the Swiss population,” SNB Vice Chairman Fritz Zurbruegg said.

“Compared with 2017… its usage share has dropped significantly. The coronavirus pandemic has given additional impetus to this shift from cash to non-cash payment methods.”

Now a third of payments are made via debit cards, up from 22% four years ago, while credit cards are also becoming increasingly popular. Both are benefiting from the rising use of contactless payments.

Mobile payment apps like Twint and Paypal now make up 5% of transactions in Switzerland, up from almost none in 2017.

“Non-cash payment methods have…come to be considered, at least in part, as easier to use than cash,” said the study, which was carried out between August and November 2020.

Increased online shopping has boosted the popularity of cards and apps during the pandemic, as has the tendency to buy more at supermarkets during lockdowns.

While Swiss may be gradually falling out of love with using cash, the number of banknotes in circulation is on the rise. This suggests cash is increasingly being used as a store of value, the SNB said.

The report estimated individuals have stashed away cash reserves of around 10 billion francs or 12% of the notes in circulation.

Some 70% of the population keeps cash at home or in a safety deposit box, with most (77%) holding up to 1,000 francs to deal with unforeseen expenses or as a long-term store of value.

The SNB said negative Swiss interest rates were not a factor because most people had not been directly affected by them.