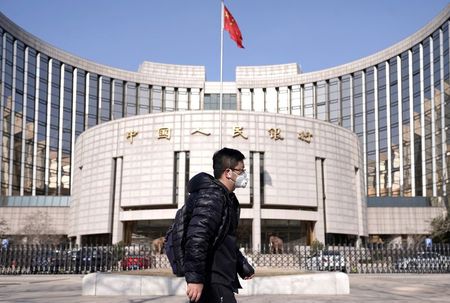 Twenty-five traders and analysts, or 78% of 32 participants, in the snap poll predicted no change in either the one-year Loan Prime Rate (LPR) or the five-year tenor.

The remaining seven respondents all expected a cut to the one-year LPR, with six participants predicting a 5 basis points (bps) reduction and one seeing a 10 bps cut.

None expected changes to the five-year tenor — which influences the pricing of mortgages, an area where authorities are keeping a tighter grip to curb rising home prices.

The People’s Bank of China (PBOC) injected billions of yuan through medium-term loans into the financial system earlier this week, which many market participants interpreted as an effort to prop up activity, although the cost of such borrowing was left unchanged.

The interest rate on the medium-term lending facility (MLF), which serves as a guide for the LPR, has been unchanged for 16 straight months, though the central bank has plenty of other tools it could use to bring down borrowing costs. It cut banks’ reserve requirements (RRR) in July, and many market watchers see another such cut in coming months.

Policy insiders told Reuters earlier in August that China is poised to quicken spending on infrastructure projects while the central bank supports the economy in other ways.

However, some survey participants believe there is urgency to roll out more easing measures, such as a rate cut, to reduce the risk of a sharper economic slowdown in coming months.

Liu Li-Gang, chief China economist at Citi, said the central bank would likely offer some easing signals but be cautious about taking any actions in the remainder of the year.

“From the market’s perspective, recent economic data came in below expectations. But compared with the government’s annual GDP target of 6% or above, the economy remained in a normal functioning range. An annual 8% growth (rate) is way above the target. It’s a mismatch between expectations, and there’s no risks of (the recovery) derailing.”

Liu did not see a big chance of a cut to either the MLF rate or LPR this year.

The LPR is a lending reference rate set monthly by 18 banks.

All 32 responses in the survey were collected from selected participants on a private messaging platform.