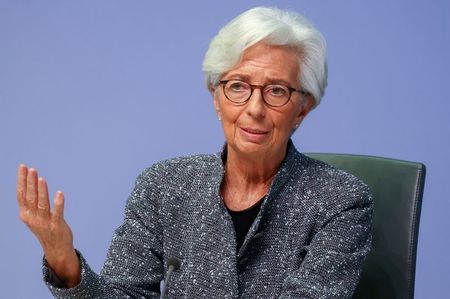 As central banks around the world mull a reduction of their pandemic-related bond buying supports as recoveries widen, the timing and speed of these so-called ‘tapers’ now dominates market thinking and will for the rest of the year and beyond.

Policy interest rates remain pegged close to zero for the foreseeable future – and central bank control of credit and money in the economy is largely dictated by the extent of these bond programmes and signalling around their pace and longevity.

But as investors await the latest guidance and economic forecasts from the ECB this Thursday, the nuance of its policy in this regard differs considerably from that of the U.S. Federal Reserve or most of its peers.

If you believe most ECB watchers, the central bank will most likely signal some cut in the current 80-billion-euro ($95 billion) monthly bond buying and allow the gigantic 1.85-trillion-euro Pandemic Emergency Purchase Programme (PEPP) to run down by March.

Back-of-the-envelope calculations by analysts at ING and elsewhere show that dropping the monthly purchases to 60 billion euros for the final quarter of the year and further to 30 billion euros in the first three months of 2022 will use up all but 75 billion euros of the entire programme.

The main difference between the ECB and the others was that Frankfurt and the euro central banks were already engaged in a wider Asset Purchase Programme of some 20 billion euros a month even before COVID-19 hit and this has continued to run in parallel with the PEPP.

And so while tapering of bond buying for the Fed and others is usually seen in terms of gradually ending the purchases over a fixed period down the line, even fully tapering the ECB’s PEPP will leave the APP in play beyond March.

If anything, ending the PEPP will likely see the APP increased to keep financing conditions for governments stable and while inflation remains persistently below the ECB’s new 2% target despite summer spikes in the headline rate to as high as 3% this year due to pandemic bottlenecks and base effects.

The ECB may well lift its anaemic 2023 inflation forecast from a standing 1.4% – but it’s unlikely to see it above target on that horizon and ‘core’ inflation for last month was still as low as 1.6% despite the sparky headline.

Long-range market inflation expectations captured by the five-year, five-year forward inflation swap have backed up lately to as high as 1.75% amid a general recovery – but remain substantially below target.

So much so that some big bond funds think the APP could be “upsized” to as much as 60-80 billion a month when the PEPP ends and with no defined end point beyond progress on the underlying economy, inflation and what ECB chief economist Philip Lane calls “favourable financing conditions”.

And so, a slight taper if you just look at overall monthly bond buying – but no end in sight to bond buying per se, let alone a reduction of the ECB balance sheet.

The much bigger question is just how the central bank segues from one programme to the other – possibly even creates another interim programme – and how it navigates self-imposed constraints on how much of each country’s national bond markets it can buy.

These limits were abandoned for the PEPP as economies were shut down when COVID-19 hit but still apply to the ongoing APP. Lane and others have discussed how the APP is best designed within legal frameworks going forward and he recently told Reuters last month that “flexibility” was important and the ECB should try to “minimise the amount of absolute red lines”.

“The need to flexibilize the APP is key,” said Morgan Stanley’s economists.

They added that several countries were already close to the APP’s 33% limit on the amount of each country’s bonds it can hold and reaching the ceiling on one would impair the whole programme due to a requrement to use the so-called “capital key” of proportional buying across euro members.

Raising the issuer limits could cause legal questions about the role of the ECB in any future national debt restructurings, but the ECB could pledge not to use a veto on creditor workouts to overcome that.

Averaging the capital key over time, rather than applying it strictly each week, is another way to keep the programme malleable, while lifting the 10% limit on supranational issues it can buy would allow greater participation in European Union Recovery Fund debt sales.

But for both markets and the ECB, the pace of APP purchases relative to net new government bond sales crucially determines the outcome for sovereign yields and the currency.

Morgan Stanley’s “base case” is there’s no taper in PEPP until 2022, then a reduction by just 10 billion euros a month in the first quarter of next year. That would terminate the PEPP well below the 1.85 trillion euro total but allow the APP to be lifted to 50 billion euros per month in Q2 before gradual reductions in subsequent quarters.

On such a transition, it estimates 2022 euro government bond supply net of redemptions and ECB buying would be positive to the tune of about 80 billion. While far above the negative -170 billion euros for this year and -203 billion for 2020, Morgan Stanley reckons this would still be manageable and less than half the positive 175 billion euros in 2019.

Even to remove the supports? A shape-shifting taper perhaps – but still hard to define.