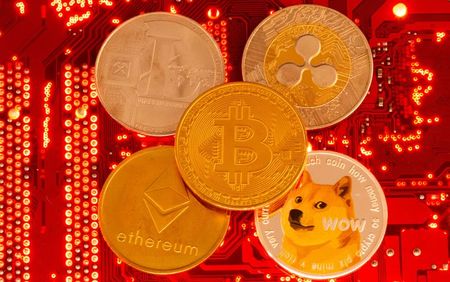 Western central banks and watchdogs have to date mostly stood aside from cryptocurrencies, emphasising transparency and a ‘caveat emptor’ approach to what they see as largely speculative vehicles rather than transaction currencies per se.

The growing involvement of mainstream banks and asset managers pushes them up the radar screen, but harsher curbs don’t seem imminent yet.

But explosive issuance of stablecoins, which have grown 18 fold over the pandemic to more than $100 billion, is a different matter and has been setting off alarm bells all year.

Stablecoins are essentially cryptocurrencies – verified on decentralized public ledgers or blockchains – but are designed to have a stable value relative to hard currencies or gold to avoid the sort of volatility that makes bitcoin and other tokens almost impossible for most commerce.

While they operate independently of traditional banking systems, it’s the assets they use to theoretically peg their value that loops them into the real world – much like a sci-fi portal from the “upside-down” world of crypto to the material world that watchdogs are paid to be anxious about.

Whether eventually used for online payments or simply to grease the wheels of the so-called Decentralised Finance of crypto credit markets, the stablecoin universe is so far dominated by two main tokens, Tether and USD Coin.

Facebook-backed Diem, formerly known as Libra, is another in the works. But it has yet to launch amid intense governmental scrutiny and pushback over its potential scale and systemic risks.

Launched in 2014, however, Tether is already more than 60% of the $100 billion total currently issued.

What it uses as reserves to fulfil the promised one-for-one peg with the dollar is what rankles regulators. It’s not solely dollar cash, as many might assume, but a mix of commercial paper, bills, bonds and loans.

According to Tether, about 50% of its reserves – some $20 billion – were in commercial paper at the end of March, 12% in secured loans and 10 percent in corporate bonds, funds and precious metals. Only 2.9% was in dollar cash.

Fitch credit rating agency warned this month that the rapid growth of stablecoins could have destabilising effects on short-term credit markets, although it acknowledged models differed and USD Coin – more than 20% of the stablecoin complex – ensures its dollar peg with cash in custody accounts.

“Potential asset contagion risks linked to the liquidation of stablecoin reserve holdings could increase pressure for tighter regulation of the nascent sector,” it said, adding that Tether’s CP holdings may be larger than most U.S. or European prime money market funds.

“A sudden mass redemption of USDT (Tether) could affect the stability of short-term credit markets if it occurred during a period of wider selling pressure in the CP market, particularly if associated with wider redemptions of other stablecoins that hold reserves in similar assets,” Fitch said, flagging collateralised stablecoin Iron’s peg break last month.

This is where the Federal Reserve is focussed at least.

“In effect this is a very risky prime fund,” Rosengren told an OMFIF conference on financial stability, stressing that U.S. prime money market funds would not be allowed to hold many of these assets, such as longer duration securities or precious metals.

“A stablecoin that has this kind of characteristic… is not going to be stable in times when we see spreads gapping out in a significant way,” Rosengren added, noting that prime funds got into difficulties in the last two recessions.

“There is a financial stability concern as they are growing and we need to look at regulation and what’s been marketed to the general public,” he said.

Focussing more on any widening of the use of stablecoins as payments, as in the case of Diem, the Bank of England insists they should be regulated the same as commercial bank money and have equivalent capital and liquidity rules and offer deposit insurance.

In shifting plans from Switzerland to the United States in May, Diem said its planned dollar stablecoin would be issued by California-based Silvergate Bank. Silvergate would manage the reserves that support it – reserves Fitch says would be least 80% in low-risk short-term government securities and 20% in cash parked periodically in money market funds.

U.S. and European legislation that deals with stablecoins and their reserve management has been introduced since late last year – and Fitch claims that could lead to greater transparency and reporting as well as less risky reserve collateral.

But there appears to be little clarity on the progress or timeline for any of these moves.

“We believe authorities are unlikely to intervene to save stablecoins in the event of a disruptive event, partly owing to moral hazard,” Fitch concluded. But it added that “authorities could step in to support dealers and prime MMFs should stablecoin redemptions lead to or amplify a wider CP sell-off, pressuring market liquidity and impeding new CP issuance.”

If an arms-length approach to digital money and crypto finance was once preferred because it wasn’t considered systemic enough, then the stablecoin surge may have forced a change of tack.