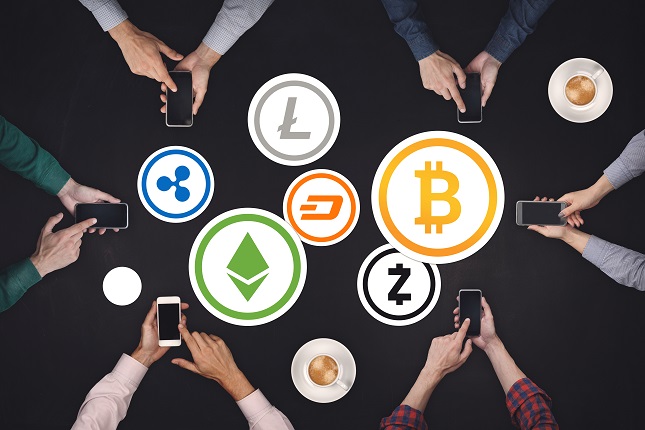 Since the price is low, an investor with little capital can buy shares, and, in case he can read the market correctly, his investment will have healthy returns.

After reading, you will determine which one is better for short term investments.

The Differences Between the Cryptocurrency and Penny Stocks

What makes the two different from each other comes from what makes them similar because neither of them is regulated. When you trade penny stocks over the counter, it means they are not under the monitoring and regulation of the stock exchange. No central bank controls cryptocurrencies because they are decentralized. However, lack of regulation is riskier with penny stocks since their susceptibility to fraud and scams are higher.

Cryptocurrency is less risky because of the blockchain technology they use, which is a public ledger. There is less fraudulent activity because all records, accounts, and transactions are public.

Bitcoin has had a strong performance over the years with huge returns and continuing customer adoption. Compared to the worldwide currencies, Bitcoin yielded bigger returns than any of them for 5 out of 6 years.

The percentages show how outstanding payouts were during a 5-year stretch for all assets, stocks, currency, or bond. Since Bitcoin is on the rise again, the underlying computational network has become stronger and more secure than before. In addition, there are a lot of user-friendly wallets, applications, and arising resources.

The Similarities Between Cryptocurrency and Penny Stocks

Whenever cryptocurrency is launched, founders become interested in circulating the currency virtually so certain amounts of units are resold to investors. They will either get an existing digital currency, or fiat currency, which is normally USD. The majority of cryptocurrencies have a value between $3-$4 per unit during the early months of existence, like the price of penny stocks.

There are opportunities that have a low entry fee. It involves some hunting, but you do not need a lot to get started. With penny stocks, you can get involved in big board stocks options trading at a few hundred dollars in every share. Another similarity is that penny stocks and cryptocurrency can have low commission rates and they are both volatile with gains and losses.

It is an encouraging sign that the volatility is decreasing because of the lower daily returns in the previous years. In the past, Bitcoin was perceived as a volatile investment, which is true. However, this has lessened because of market maturity.

There is already a decrease in variation to levels that are more synonymous to traditional currencies. That is because of the daily standard deviations which decreased the returns from 5% to 10% daily from 2014, and under 2 before that. The reason behind this is the deeper liquidity among exchanges, a better understanding and use of Bitcoin, and overall confidence in buying Bitcoin. The network experiences less panic in buying and selling cryptocurrency. With a lower variability, the asset is less risky and becomes more comparable to the behavior of investment in gold as a global hedge when there is a collapse in the currency and negative pressures from the market.

You can invest in penny stocks and cryptocurrency with a low capital and they both have the potential to bring high yields, and highly speculative. A lot of traders prefer to trade in safer environments, which involves price movement investments.

Whichever you choose, there is always a risk in penny stocks and cryptocurrency investment, but you can be sure that the returns are healthy if it works out.