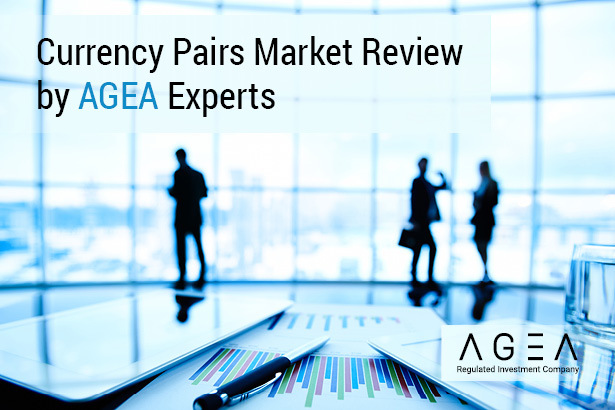 Data released on Monday showed that the SENTIX Investor Confidence Index in the Eurozone rose to 21.0 in May, the highest since March 2018. Schnabel, a member of the ECB Executive Committee, said that even if inflation rose briefly, the central bank would not adjust its policy. On Tuesday, the ZEW economic sentiment in the Eurozone rose sharply from 66.3 to 84 in May. Klaas Knot, member of the ECB Management Committee, said that the foundation of the euro zone’s recovery is becoming more and more solid. Although it fell last Tuesday, the EUR seems to have a support level near 1.2045, and the SAR indicator shows a buy signal. Support 1.1994 Resistance 1.2178 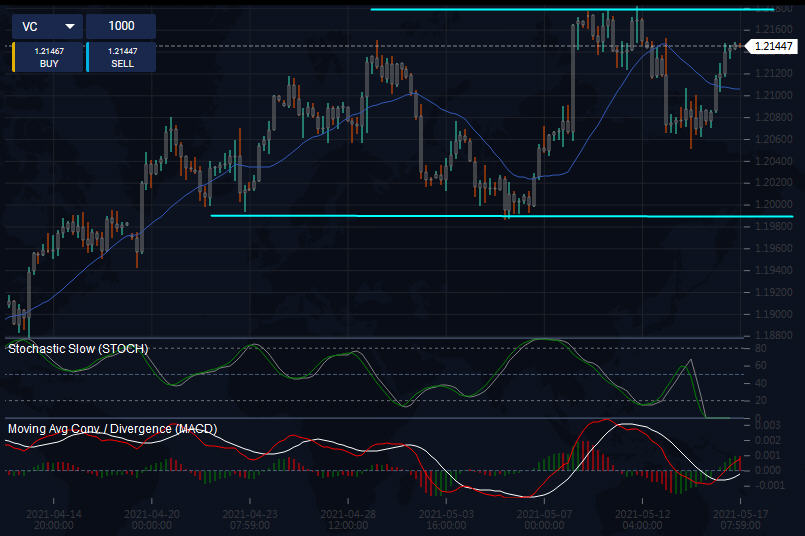 Data released on Wednesday showed that Britain’s GDP grew by 1.4% in March and -7.8% in February. Although the GDP in the first quarter was still -6.1%, it was better than -7.3% in the previous quarter. BoE chief economist Haldane said that the UK GDP growth rate is expected to reach double digits within a year from now. Jonathan Haskel, a member of the BoE Monetary Policy Committee, expects the economy to rebound in the short term, but is not worried about rising inflation. BoE Governor Bailey also said on Thursday that the low interest rate situation will not change significantly. The MACD indicator is still above the zero axis, the STOCH indicator has risen to the overbought zone, so the pound still has a certain upside. Support 1.3878 Resistance 1.4151 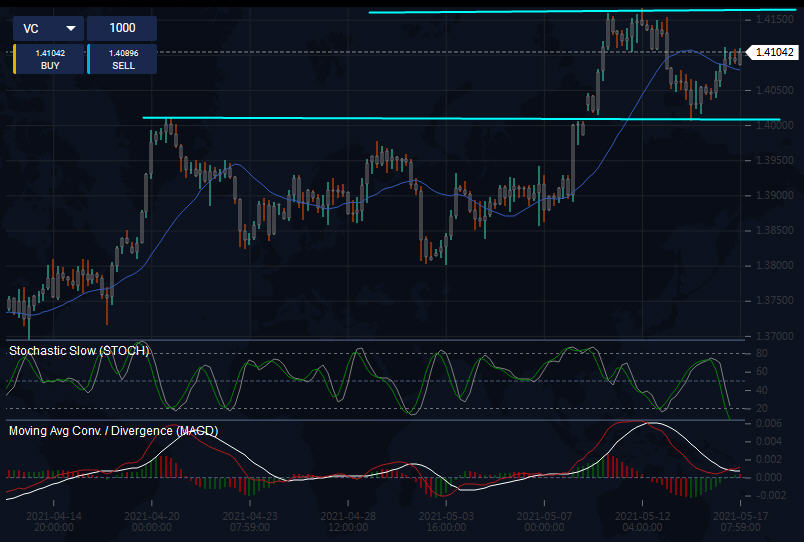 The minutes of BoJ’s April monetary policy meeting pointed out that the Japanese economy has rebounded, but the risk of the recurrence of the Covid19 epidemic is still worthy of attention. Many members of the Central Bank Policy Committee said that the focus is to support the economy through ultra-loose monetary policy. Central Bank Governor Haruhiko Kuroda said on Thursday that before issuing any digital currency, he will ensure that it does not disrupt Japan’s financial system. He also said that the Bank of Japan’s purchase of ETFs is part of the ultra-loose policy and is an essential measure. The USD encountered Short side pressure at the resistance level in early May. The MACD indicator has issued a sell signal, and the moving average pattern has also shown a death cross signal. Support 108.51 Resistance 109.71 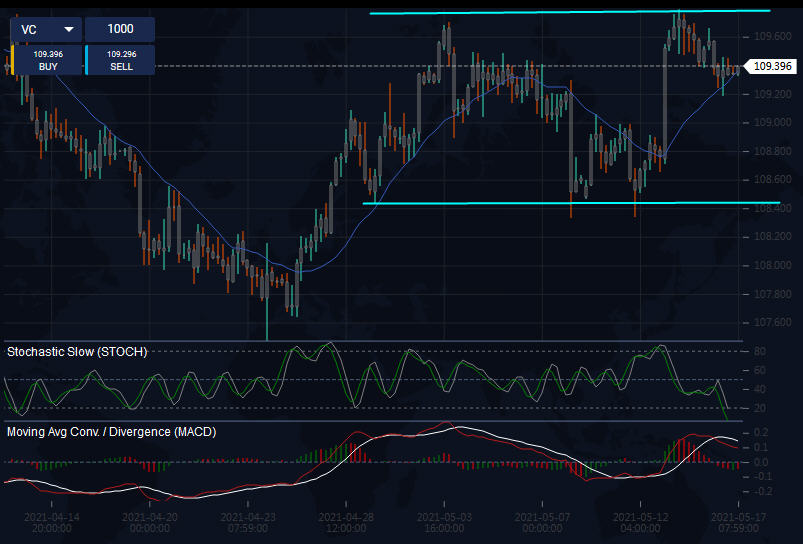 Data released on Monday showed that Australia’s retail sales data rose to 1.3% in March, from the previous value of -0.8%. The Australian government announced the 2021/22 budget on Tuesday, and the amount of expenditure exceeded market expectations, which may result in deficits in public finances in the next few years. But rating agency Fitch said on Thursday that the Australian government’s budget reflects a strong recovery in the economy and labor market, which has allowed public finances to improve. AUD rebounded from the support level of early May and closed at the 200-day moving average on Friday. It can be seen that the downtrend has not yet formed. Support 0.7687 Resistance 0.7881 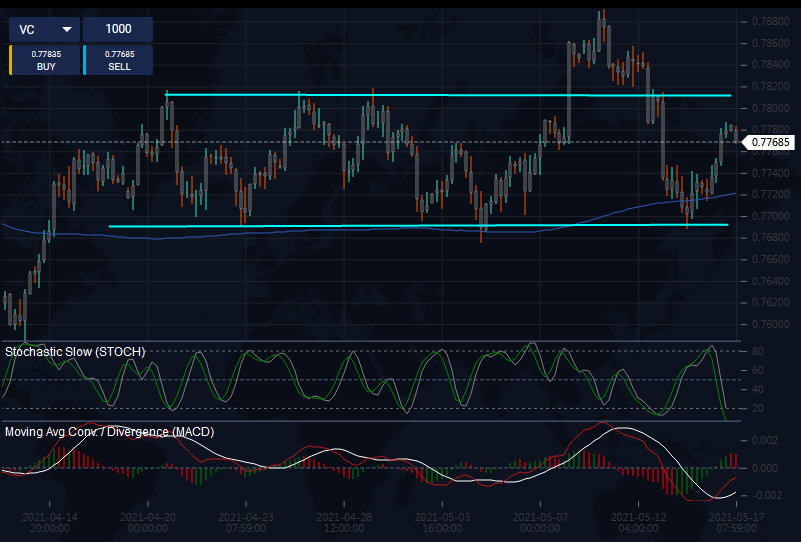 New Zealand Prime Minister Ardern said on Thursday that the New Zealand government is studying ways to gradually reopen the border and is cautious about reopening international travel. Data released on Thursday showed that the U.S. PPI in April was stronger than expected, further proving that U.S. inflation is rising. Christopher Waller, the member of the Federal Reserve Board of Governors, said on Thursday that the inflation rate is expected to exceed the target level of 2% in the next two years, but it need to take a long time to be above this level, otherwise the Fed will not raise interest rates. NZD tried to break through the 200-day moving average downward but failed. The MACD indicator rose, and the STOCH indicator rose to the overbought zone. It will challenge the high of 0.7310 in the coming week. Support 0.7127 Resistance 0.7302 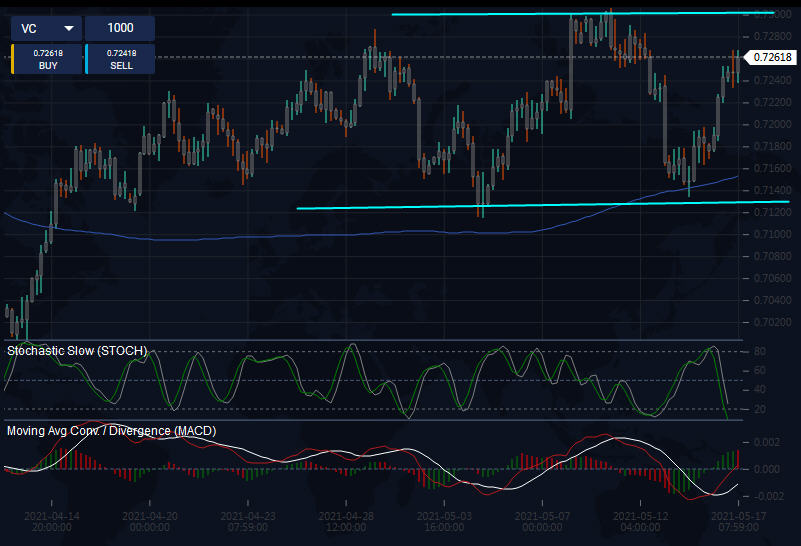 The prices of raw materials such as copper, iron ore, and wood have all been rising recently, which has increased the demand for commodity currencies. Data released on Wednesday showed that the US Core CPI rose from 1.6% to 3% in April, and the CPI rose from 2.6% to 4.2%, the largest increase in 12 years. Currently, the market predicts that the probability of a rate hike in December 2022 is 80%. Bank of Canada Governor Macklem said on Thursday that if the Canadian dollar rises sharply, it may have a significant impact on the BoC’s policy outlook and monetary policy formulation. From the chart, USD/CAD is trying to build a bottom at the low level, but the MACD indicator is still below the zero axis, the SAR indicator shows selling, so the short side pressure is still very strong. Support 1.2095 Resistance 1.2188 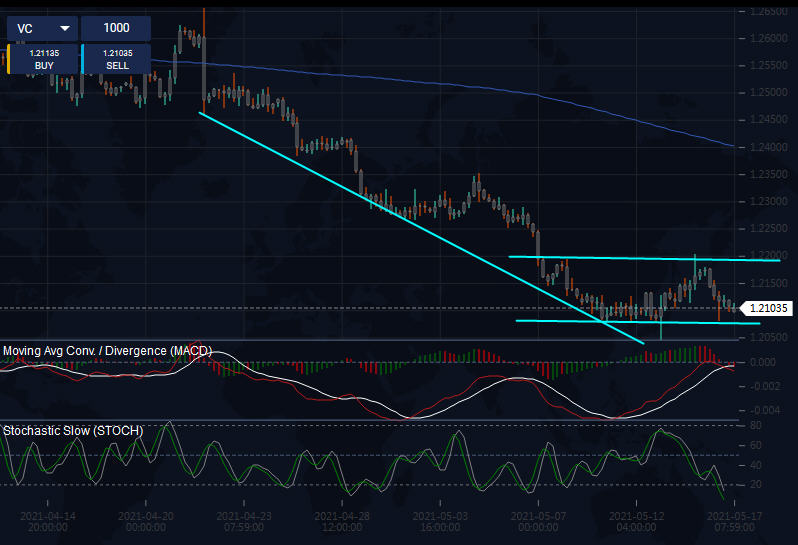