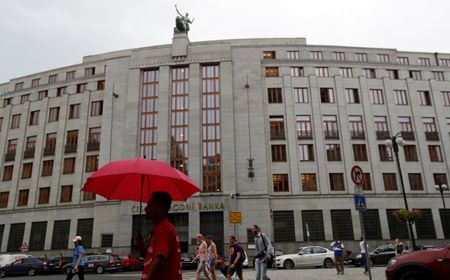 Having kept its main two-week repo rate at 0.25% since May 2020, central bank policymakers have been weighing whether to start tightening in June or wait until the next meeting in early August.

Inflation eased to 2.9% in annual terms in May after a jump to 3.1% in April, and Dedek doubted whether flare up again so soon.

“That last figure created somewhat bigger comfort for the option to wait for another set of data,” Dedek said in an interview conducted on Monday.

“If I were to choose from the two options (June or August), then given the uncertainty, I would be more comfortable if the waiting period was longer,” he said.

His caution may not shared by others among the seven-member board. Four of them have already indicated that the bank could possibly start raising interest rates as early as the June 23 policy meeting.

After suffering its deepest recession due to the COVID-19 pandemic, the Czech economy has shown signs of a strong revival.

While the gross domestic product fell 2.1% year-on-year in the first quarter, output in industry — key to the heavily manufacturing-based Czech economy — soared by 55.1% in April compared to the same month last year, when COVID-19 disruptions shut many factories and automaker plants like Volkswagen’s Skoda Auto.

Even with such promising signs of recovery, Dedek said it was perhaps too early begin tightening policy.

Dedek also said that tightening could put additional pressure on public debt financing, when it is already dealing with the government’s loose fiscal policy.

The bank’s quarterly staff forecast update from May penciled around three interest rate hikes by year-end.

Following the bank’s hawkish signals, the market has priced in almost two full hikes by the year-end, with around 50% chance of the first hike already this month.

Should the Czech central bank decide to tighten, it would be among the first in the European Union, with Hungary’s central bank signaling its intention to tighten when it meets on June 22.