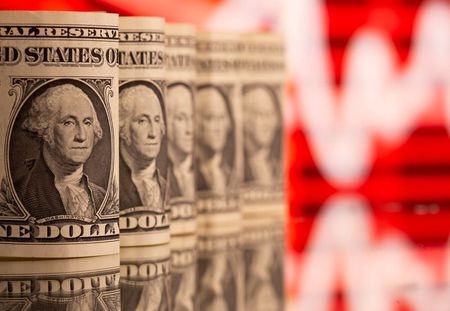 The greenback rose about 0.2% against the yen, euro and pound in trade thinned by holidays in China and Japan. It stepped up slightly further against the trade-sensitive Australian and New Zealand counterparts while the dollar index against a basket of major rivals added 0.2% to 91.151.

The advances partly reverse Monday’s losses and leave the index about 0.8% above a one-month low struck last week. Traders said its next moves hinge on U.S. labour data due Friday and clues in the interim about the thinking of Federal Reserve policymakers.

“Markets will not be comfortable pushing the dollar all the way down given this in-your-face U.S. outperformance, and how much longer this may last given outbreaks happening elsewhere,” said Mizuho economist Vishnu Varathan in Singapore.

“If incoming data, whether its services ISM or payrolls shows job creation continues to be strong…I think markets will start gravitating towards the idea that the Fed could move sooner (than projected),” he said, referring to rate rises.

But the detail in the Institute of Supply Management’s survey showed transport snarls and raw material shortages caused the dip in output, rather than any faltering demand and there are hints of division at the Fed over the best course of action.

Dallas Fed President Robert Kaplan caused a stir on Friday by calling for beginning the conversation about tapering. He is due to appear again at a Q&A session at 1700 GMT on Tuesday and a slew of Fed speakers are scheduled to talk in coming days.

“Non-voting hawks like Kaplan and (Loretta) Mester could repeat Kaplan’s call for a conversation about tapering,” Westpac analysts said in a note.

“The Fed’s dovish influential core won’t have any of it, but expectations for solid U.S. data this week and likely more hawkish regional Fedspeak leave the dollar index positioned for more two-way price action.”

Elsewhere central bank meetings are coming in to focus. The Aussie dollar was unmoved by an expected decision from the Reserve Bank of Australia on Tuesday to leave policy settings unchanged. The bank did, however, upgrade some headline economic forecasts and more detailed projections are due on Friday.

Sterling dipped marginally to $1.3870 with a Bank of England meeting on Thursday the main event in traders’ diaries. Analysts reckon the bank might announce a slowdown in its bond buying programme as vaccinations have bolstered Britain’s economy.

“The rapidly improving economic outlook in the UK amid general dollar weakness may just be the catalyst to move sterling back above 1.40 in the coming weeks,” said Commonwealth Bank of Australia analyst Kim Mundy.