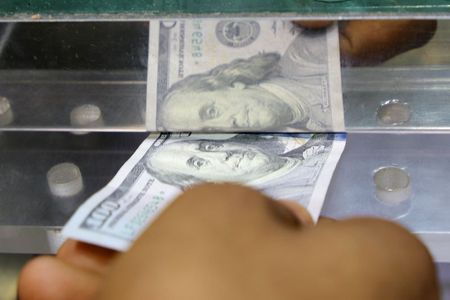 The greenback fell after the ADP National Employment Report showed private payrolls rose by 374,000 in August, up from 326,000 in July but well short of the 613,000 forecast. A report on weekly initial jobless claims arrives on Thursday and on Friday the government releases the payrolls report for August, which could provide clues about the Federal Reserve’s policy path.

“Certainly the recovery has been uneven but if nonfarm payrolls should also disappoint, that would seemingly close the door to an imminent taper and keep the dollar in a bit of a funk,” said Joe Manimbo, senior market analyst at Western Union Business Solutions in Washington DC.

The dollar has been under pressure since Friday, when Fed Chair Jerome Powell said at the Jackson Hole conference that while tapering could begin this year, the central bank was in no hurry to raise interest rates.

Concerns about rising COVID-19 cases denting the economic rebound could also serve to keep the central bank from scaling back stimulus.

Other data showed U.S. manufacturing activity increased more than anticipated in August, but a measure of employment in factories fell to a nine-month low, likely due to a shortage of workers.

The euro rose against the greenback to a one-month high as inflation worries persisted following data on Tuesday which showed euro zone inflation increased to 3% year-on-year in August, the highest in a decade and above the European Central Bank’s 2% target, as well as the 2.7% Reuters forecast.

“We have seen numbers that argue against keeping policy so low for so long and that has been helping the euro… it is certainly going to heighten the focus on the QE debates next week when we hear from the ECB,” said Manimbo.

The ECB is scheduled to hold a policy meeting on Sept. 9.