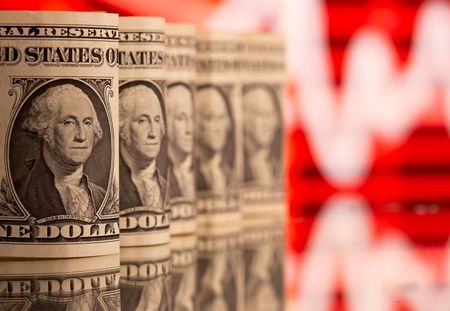 For the week, the dollar index gained 0.6%, its largest weekly percentage rise since mid-August.

The Fed holds a two-day monetary policy meeting next week and is expected to open discussions on reducing its monthly bond purchases, while tying any actual change to U.S. job growth in September and beyond.

“While we doubt that the FOMC will set out a plan for tapering its asset purchases, the new economic projections may shed some light on its reaction function given building cyclical inflationary pressures,” wrote Jonathan Petersen, markets economist at Capital Economics, in its latest research note.

“Our view remains that inflation in the U.S. will stay elevated for longer than the FOMC and investors currently anticipate, in turn supporting higher U.S. yields and a stronger dollar,” he added.

Speculation about a Fed taper this year gathered pace after U.S. retail sales unexpectedly increased in August, data showed on Thursday, rising 0.7% from the previous month despite expectations of a 0.8% fall. A business sentiment survey also showed a big improvement.

The University of Michigan consumer sentiment for September inched higher to 71 versus the final August reading of 70.3, but overall analysts said the rise was nowhere near the improvements seen in the Empire States and Philadelphia Fed manufacturing surveys.

The dollar held gains after the Michigan sentiment report.

Currency markets were generally quiet on Friday with traders reluctant to take on new positions ahead of a clutch of important central bank meetings next week including the Fed, the Bank of Japan and the Bank of England.

The yen has shown limited reaction to the ruling Liberal Democratic Party’s leadership race, which formally kicks off on Friday ahead of a Sept. 29 vote. The LDP’s parliamentary dominance means the party’s new leader will become prime minister.

The dollar also rose to a two-week high against the offshore yuan and was last up 0.3% at 6.4711. The yuan is being pressured by growing worries about China’s real estate sector as investors fear property giant China Evergrande could default on its coupon payment next week.

The British pound fell 0.4% to $1.3738 as UK retail sales undershot expectations. However, with investors bringing forward forecasts for a Bank of England interest rate hike to mid-2022, sterling remains supported.