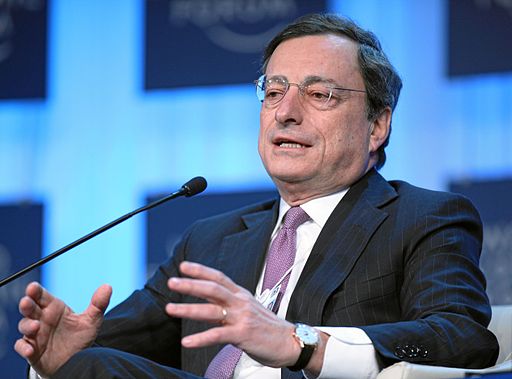 Earlier today at 1300 GMT, European Central Bank President Mario Draghi delivered the first of two speeches scheduled for today. Here are a few of the highlights.

Speaking before the European Parliament, ECB chief Draghi warned that the main risks to economic growth come from trade disputes.

“As I have said before, downside risks to the outlook mainly relate to the threat of increased protectionism. A strong and united European Union can help reap the benefits of economic openness while protecting its citizens against unchecked globalization. In leading by example, the EU can lend support to multilateralism and global trade, which have been cornerstones of growing economic prosperity over the past seven decades. But to be successful on the outside, the EU requires strong institutions and sound economic governance at home.”

Draghi also took some time to explain the ECB’s monetary policy and the phasing-out of non-standard measures.

He said the Governing Council assessed inflation developments against the three conditioning criteria for a net asset purchased: convergence, confidence, and resilience.

About convergence, he said the 2018 Euro system staff projections see headline inflation reaching 1.7% in each of the next three years.

About confidence, Draghi said “Our confidence in the inflation path is also rising. First, the range of uncertainty around the inflation projections has narrowed. Second, underlying inflation has increased from the very low levels that prevailed in 2016 and is foreseen to rise as the economy continues to expand, capacity utilization strengthens and labor markets further tighten.”

About resilience, the ECB chief said, “The projected path of inflation appears to be self-sustained, i.e. resilient to a gradual ending of net asset purchases.”
Draghi also reiterated that the ECB would pare back its monthly asset purchases and end the program at the end of December.

“On the basis of this assessment, the Governing Council concluded that progress towards a sustained adjustment has been substantial so far and should continue in the period ahead, although some uncertainties persist. We, therefore, anticipate that after September we will reduce our monthly net asset purchases from $50 billion Euros to $15 billion Euros and will end our net asset purchases at the end of December. This is subject to incoming data confirming our medium-term inflation outlook.”

The Euro showed little reaction to Draghi’s speech and it continued to hold on to its earlier gains. The lack of fresh information other than the comments on trade risks probably means much of what he said has already been priced into the market.

Overall, it was a “cheerleading” speech with Draghi emphasizing the accomplishments of the ECB and the importance of the European Union unifying against the threat of increased protectionism in order to promote economic prosperity.