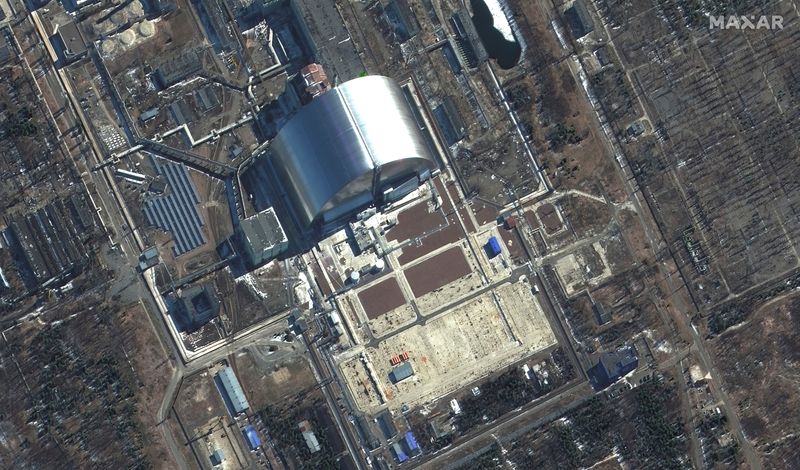 LVIV, Ukraine (Reuters) -The European Bank for Reconstruction and Development expressed concern about the situation at Ukraine’s Chernobyl nuclear power plant on Friday following its takeover by Russian forces and a problem with its power supply.

Ukraine said on Wednesday there was an increased risk of a radiation leak at Chernobyl, which suffered the world’s worst nuclear accident in 1986, after a high-voltage cable was severed during fighting and electricity to the plant was cut off.

Russia’s energy ministry said on Thursday Belarusian specialists had restored the electricity supply and Russia’s defence ministry said it had agreed to allow a Ukrainian repair team to access power lines in the area around the plant.

But Ukraine’s state nuclear power regulator said on Friday the external power supply had still not been restored, and Kyiv has told the U.N. nuclear watchdog that it has lost contact with the plant.

Ukrainian military intelligence also warned that Russia could deliberately cause a “catastrophe” at the decommissioned plant and blame it on Ukraine.

“The European Bank for Reconstruction and Development is extremely concerned by recent developments at the Chernobyl Nuclear Power Plant (ChNPP) in Ukraine,” the EBRD said in a statement.

“The EBRD, which has been managing over 2.5 billion euros in international funds to transform Chernobyl since 1995, believes that recent events are putting in jeopardy the achievements of decades of successful international collaboration to secure the site.”

The EBRD said an uninterrupted power supply to Chernobyl must be maintained. It also said it was important to have monitoring and control systems operating, normal shift rotations should be resumed after their disruption during fighting, and supplies must be maintained to staff operating the plant.

Any military action on the site itself was “extremely dangerous” to a storage facility for spent nuclear fuel and inspections by the Ukrainian regulator and the International Atomic Energy Agency were needed, it said.

Ukrainian military intelligence said on Friday, without presenting clear evidence, that it was “possible” Russia was preparing an attack on the Chernobyl plant “for which the occupiers will try to shift responsibility to Ukraine”.

Moscow calls its actions in Ukraine a “special military operation” designed to disarm and “de-Nazify” Ukraine. It denies targeting civilians.